By: Rick Hiduk
In: Uncategorized
With: 0 Comments 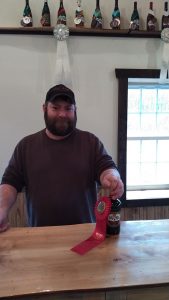 Tim Wells of Deep Roots Hard Cider shows the ribbon he garnered in the Best Dessert Cider category at the Pennsylvania Farm Show on Saturday.

Deep Roots Hard Cider of Sugar Run scored a sweet victory on the first official day of the Pennsylvania farm Show in Harrisburg. It was announced on Saturday that their entry in the Dessert Cider category finished in second place. Deep Roots’ Honey Pommeau ranked slightly behind a first-place Pommeau entered by Wyndridge Farm from York County and ahead of an Ice Cider entered by Stone & Key Cellars of Montgomery County.

Deep Roots owners Tim and Lynda Wells received news of the win about a week ago, along with an invitation to Harrisburg to take part in the winners circle ceremony. Despite the three-hour drive, Tim was glad that they went. “The Farm Show is a festival already,” He remarked. “But they had a really nice set up for us with a big stage and seating for about 100 people.”

It might surprise some to know that Pennsylvania ranks sixth in cider production in the United States, with more than $25.6 million in sales in 2016. The growth of the cider market has been estimated at six percent per year. The Cider Competition at the PA Farm Show started in 2018 to reflect the surging popularity of craft ciders.

The Wells took four varieties to the Farm Show last year. While they obtained high scores, Tim recalls, they were passed over for the top prizes. Deep Roots produces primarily “still” or English-style ciders, which are not very bubbly. “They were looking fort carbonation,” Tim surmised. “I just don’t think they had the right category for us yet.”

Deep Roots ciders tend to be crisp – more like a wine. In fact, Tim explained, the only difference between cider and wine, from the Deep Roots perspective, is the use of apples instead of grapes.

Tim had a hunch that his Honey Pommeau would do well as a Dessert Cider because, like a dessert wine, it is both sweet and strong. The only real criteria to meet was that the alcohol content had to be 14 percent or better. His Pommeau, a combination of apple brandy and non-fermented cider from winesap and honeycrisp apples, comes in at 17.1 percent.

“It’s a blend of the old and the new,” Tim said of the two varieties of apples. “I put an American twist on it by aging it in a charred oak barrel instead of a traditional oak barrel.” After seven months in the barrel, Tim added a bit of honey for yet another layer of sweetness.

The Wells were pleased with the win, the ribbon for which will join at least 20 other awards on their mantel that have been won in recent years at international cider competitions in the Finger Lakes and Great Lakes. Next year, Tim hopes to enter several varieties in the Farm Show as the cider competition evolves.

Deep Roots was invited by the Pennsylvania Cider Guild to participate as a vendor in the Cider Garden at the Farm Show, where visitors can sample and purchase ciders throughout the week. But the couple’s time for participation was limited this year, as they had just finished construction of a new retail and tasting room in Sugar Run.

Tim credited Lynda, who is the business manager, and marketing manager and partner Oliver Young for their roles in another successful year for the business, which brought out their first batch of cider in 2015.

The shop is open by appointment only until April, when regular hours will begin. A grand opening is planned in May. For details, interested readers can follow Deep Roots Hard Cider on Facebook.