Dec. 19 was Ugly Sweater Day at the Bradford County Courthouse, which led to judging in each department after the commissioners meeting. Weighing in with their tacky holiday renderings were (from left) chief clerk Michelle Shedden and commissioners Doug McLinko, Daryl Miller, and Ed Bustin

In the final public meeting of the Bradford County Commissioners for 2019 and most likely his last as chairman, commissioner Doug McLinko took some time to praise long-time county sheriff C.J. Walters and asked him to read a proclamation that established Bradford County as a Second Amendment Sanctuary.

Resolution 2019-20 quotes both the federal Second Amendment right to bear arms and a similarly worded article in the Pennsylvania Constitution and expresses a deep commitment by the Board of Commissioners to uphold the rights of all citizens in Bradford County to bear arms. 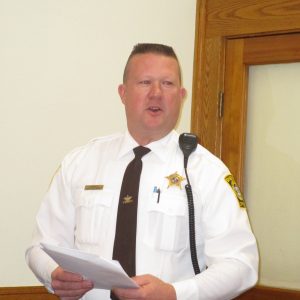 Walters (above), who stood next to a framed copy of the constitution in the board room and in front of a standing-room-only crowd, maintained that the right to bear arms is well-established and that Bradford County citizens “need to know that our elected officials stand by them.”

As it is written, the resolution labels any attempt to revise gun laws by the federal or state governments as “unconstitutional” and asserts that the commissioners will oppose any efforts to restrict such rights. McLinko suggested that the resolution was a necessary step by local governments to prevent what he sees as a growing threat by those in the nation’s capitol to dismantle the constitution. “The first amendment is also under attack,” he stated.

Commissioner Ed Bustin agreed with that remark and with the notion of standing behind the Second Amendment. Nonetheless, he explained that he was voting “no” for several reasons. Firstly, he had less than 24 hours to review the policy and said he would have preferred to look into it a bit more. Though Bustin referred to himself as a “proud gun owner with a carry permit” and a constitutional supporter, he didn’t see a reason to single out the Second Amendment.

“I believe that all of our amendments deserve equal support,” he stated. “If we were passing a resolution to support every amendment, I would vote for that.”

McLinko apologized to Bustin for the short notice on the resolution and thanked him for his comments before calling for a motion for approval, which came from commissioner Daryl Miller. McLinko and Miller voiced their approvals with “ays,” and the measure passed despite Bustin’s “nay.”

Though Bustin had not been apprised of the pending resolution, apparently others had, as a number of ardent Second Amendment supporters filled the first row and thanked Walters, McLinko and Miller for their endorsement of the document.

“What is happening here today is outstanding,” said Tom Blackall of Franklin Township. “It would be great to send this out across the country.”

According to Walters, Bradford County is the first county in Pennsylvania to adopt the resolution, though many other counties are currently considering similar measures. “I’m sure that there will be many more that join because it is so important,” Walters remarked.

Bob Raimo, owner of Shooters Gaunlet near Monroeton, took issue with Bustin’s approach to the resolution. “While I respect the concerns and opinions of everybody on the board, I don’t agree that you can support one amendment without supporting the entire constitution. That’s cherry picking in my opinion,” Raimo stated.

Raimo later refined his position, saying “There’s no reason to vote ‘no’ just because the other (amendments) weren’t included. Just because you carry a gun doesn’t mean that you support the Second Amendment.”

Most of the eight-page agenda set the tone for 2020 with motions to approve advertisement of meeting dates and times for the commissioners, prison and retirement boards; re-appointments of members to boards such as the Agricultural Land Preservation Board; hires and transfers of nearly two dozen employees and the reclassification of as many titles.

Bustin attributed the reclassifications to adjustments that reflect the evolving workloads handled by employees at the courthouse. “We’re trying to be fair,” McLinko concurred. “It’s hard to keep good employees.”

The commissioners unanimously approved a new subsurface lease with Chief Oil & Gas in Leroy Township in the area of Sunfish Pond. The same 78-acre plot was originally leased by EOG Resources in 2008, which netted the county $2,500 per acre at that time, McLinko explained. But the lease expired after natural gas prices plummeted. Gas prices are rising again after a three-year slump, and the county will get another $1,500 per acre with new lease.

“They’re getting a lot of gas up there,” McLinko noted of the lateral drilling in Leroy Township, adding that another high-producing well on Mt. Pisgah helped the county pay off a $1 million loan taken out for the purchase of new voting machines. “We are blessed as a county to be able to do that,” McLinko stated.