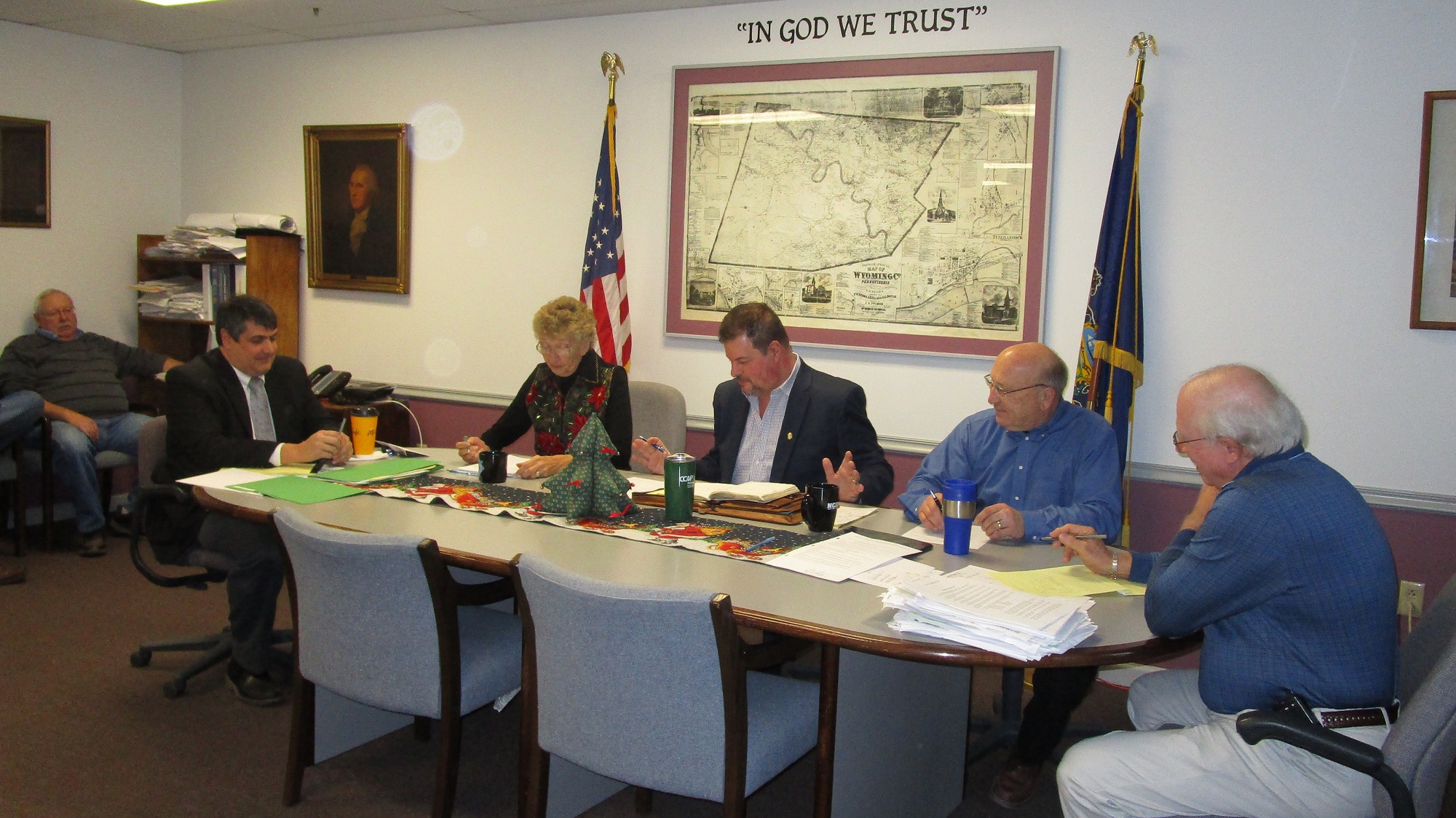 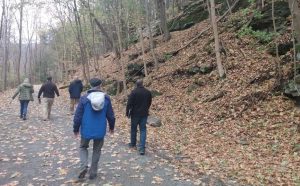 Wyoming County planner Lynnelle Farber has been working with the county commissioners to secure maintenance agreements and make enhancements to the Iroquois (above) walking and biking trail for long-term use. At Tuesday’s regular commissioners meeting, she also received approval to release up to $50,000 in Act 13 Marcellus Legacy Funding via the disbursement of mini-grants for recreation projects.

This is the third year since Farber assumed the post in 2015 that grants for up to $5,000 will be available. “It has been used for some really great projects,” Farber remarked. Between 2017 and 2018, approximately $52,000 was allotted for the purchase of playground equipment, signage, fencing and other park and sports field improvements.

Municipalities and non-profit organizations are eligible for the money, which requires a 50% match. If a township would like to purchase $3,000 in new playground equipment, for example, the municipality would have to commit at least $1,000 to the project to get a $2,000 grant.

The mini-grants can also be used as matches toward grants offered by the PA Department of Conservation & Natural Resources (DCNR) during a similar time period. Applications will be accepted by the Planning Commission from Dec. 18 through Feb. 21, 2020. Questions and requests for applications can be directed to Farber, who plans to announce the winners at a March 10 meeting of the commissioners, at lfarber@wycopa.org or 570-996-2268.

The Iroquois Trail extends from the Wyoming County Emergency Operations Center (EOC) east of Tunkhannock, roughly paralleling Sunnyside Road in Tunkhannock Township. It is technically the property of the county, but the process by which it has evolved and its future are in question since some of the easements were originally acquired by the county’s Industrial Development Association.

“The IDA is right now not a very active group,” noted Farber, who is hoping that the county can take over the easements with guidance from county solicitor Paul Litwin. “It is not uncommon for counties to hold these kinds of recreational assets. And the trail is used by a lot of people.”

The trail is currently on the radar of the Wyoming County Greenways, Trails and Open Space committee, which is working on a comprehensive plan for establishing and promoting a trail network. The county has unofficially been maintaining the trail due to its proximity to the EOC and the availability of equipment there, and Farber believes that settling some of the ambiguities will make their work easier. “Working on trails is never a sprint. It’s a marathon,” she stated. “It can take years and even decades to get the trail to match the original master plan.”

Litwin said that he didn’t see that absorbing the easements would be much of a problem.

In the meantime, Farber asked for and was granted $5,000 per year in Act 13 Marcellus Legacy funds to build a pot from which costs for maintenance and extension of the trail can be covered.

“That money can only be used for projects like that,” commissioner Tom Henry said as he voiced his approval for creating a maintenance funding pool.

Wyoming County chief clerk Bill Gaylord reported that some adjustments of the courthouse heating system in one office appears to have solved all remaining issues of an overhaul that began when the county entered an agreement with ABM. The building solutions company provided a plan to the county that included upgrades to the heating and cooling system via new thermostats and additionally insulating some areas. An important part of the contract is an energy savings target.

“I think the energy project we did is helping quite a bit,” Gaylord remarked. “We’ve done a lot with this old building to make it as efficient as we can.”

Despite making all of the adjustments suggested by ABM, energy savings at the courthouse fell short of projections by about $13,000 last year, and ABM was obligated to kick back that difference to the county. Since then, Henry noted, ABM representatives have made several visits to the courthouse to ensure that everything is working as planned.

A draft of the county budget for 2020 is complete and available for public inspection at the commissioners’ office. The county is not seeking any new taxes to cover the $15,457,051 proposed budget, which is scheduled to be approved at the next public meeting of the Wyoming County Commissioners at 9 am on Thursday, Dec. 26 at the courthouse in Tunkhannock.

Currently, it is assumed that $11,418,981 of the budget will be met via collection of property taxes, including $888,841 in delinquent taxes and fees. The Room Tax received by the county that is based on stays in local hotels and bed’n’breakfast facilities is also part of the mix and estimated at $18,000.

Salaries at $7 million and health insurance costs at $3.1 million make up about 65 percent of the budget. Most county employees are set to receive raises from 2 to 2.75 percent. Those raises are obligated by contract for employees who are union members but not for non-unionized employees.

At least $1 million in revenue, however, appears to be from sources for which there is no guarantee of continuance. The county has received funding from the state to cover 60 percent of the cost of the mandated purchase of new voting machines. $201,184 of that appears as revenue in the draft budget under “election generated income.” The voting machines were paid for with Act 13 funds, but the bulk of the reimbursement appears to be going directly to the general fund.

According to chief clerk Bill Gaylord, the handling of the reimbursement is in line with other counties and will likely go toward operating expenses at the prison and “other legitimate means.”

Additionally, $700,000 in revenue is described as an “Act 13 interfund transfer.” While use of impact fees for tax reduction is permitted, there is no guarantee that the Act 13 program will continue if Gov. Tom Wolf or any subsequent governor successfully implements a “severance tax” in its place.

Lastly, there is $112,000 in “uncategorized operating revenue” listed, for which Gaylord could not immediately identify. “We’re tracking that down. I’m not sure who put that in there, but I can get you an answer on it,” he stated.

While this influx of “one-time” revenue may prevent a tax increase in 2020, none of the three sources mentioned are guaranteed for 2021.

A significant decrease in costs for 2020 is the projected amount for prison outsourcing, which had gotten famously out of hand in recent years. The county budgeted $150,000 in 2019 to cover the cost for housing Wyoming County inmates in other facilities but only spent about $60,000, the same amount that is listed in the 2020 budget.

Commissioner Judy Mead, who will retire at the end of this year, was nominated and approved as the county’s liaison to Trehab Community Action Agency, which is headquartered in South Montrose but also recently opened a community resource center in Tunkhannock. Mead has been the county representative for a number of years and related that Trehab officials asked her to stay on.

Henry noted that year-end meetings of the Drug & Alcohol and Mental Health & Disabilities boards that Wyoming County shares with Luzerne County might shed some light on the future relationship between the two counties that has been strained in recent years. Steve Ross, who has served as director of the Drug & Alcohol department, resigned from the post on Nov. 22. Several county officials had grumbled in the past that Ross was effectively limiting services and funding to Wyoming County under the terms of the partnerships.

A lengthy executive session, which required everybody in attendance except for the commissioners, chief clerk, solicitor and commissioners-elect Rick Wilbur and Ernie King to leave the room, resulted in three actions, portions of which were made public:

The county and the Service Employees International Union that provides protections for employees at the correctional facility in Tunkhannock reached an agreement concerning overtime payment in the course of a State of Emergency.

A request for a lateral transfer by Tammy Goodwin from the prothonotary’s office to the sheriff’s department as an administrative assistant was approved after a dispute in her hourly wage was settled.

A female corrections officer at the jail was released from her duties for securities reasons. The commissioners would not release the woman’s name, as she had not yet been informed.