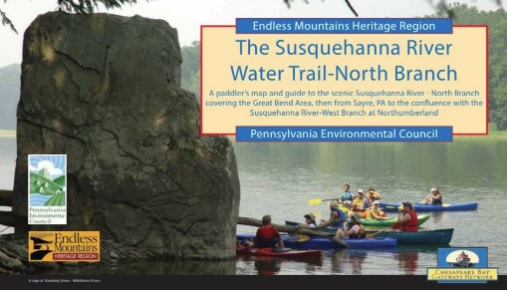 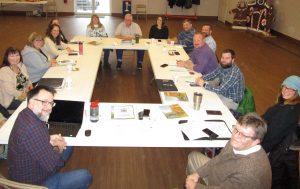 At the final board meeting for 2019, decision makers of the Endless Mountains Heritage Region (EMHR) discussed a variety of projects for the coming year for which funding has been approved. Two extensive projects involve mapping. A new series of water trail maps will be printed next year, and the EMHR is working with county planners in Bradford, Sullivan, Susquehanna and Wyoming counties to plot every heritage site on an interactive, internet-based map.

Bradford County Planner Matt Williams, whose office staff is drafting the digital Heritage Map, said that they had gathered information for the entire region, and are verifying addresses and determining GIS addresses for sites like vistas and monuments that do not have traditional street numbers. Changes and additions can be made to the new map, which will be constructed in layers.

When the app is launched next year, users will be able see additional information by hovering the cursor over the heritage site on the map in which they are interested such as contact information, hours of operation and a web address if available. According to Williams, users will also be able to find museums, historical markers and overlooks by category.

EMHR executive director Cain Chamberlin noted that significant funding from the PA Department of Conservation & Natural Resources (DCNR) will enable him and his staff to address all of their objectives in 2020, including a special purpose study with the Pennsylvania Association of Nonprofit Organizations (PANO) and the printing and distribution of new waterproof maps that include all access points, camping areas, and other things to know about the Upper North Branch Susquehanna River Water Trail, which the EMHR manages. DCNR funding will also be used by the EMHR to conduct at least two paddling sojourns next year.

Additional plans for 2020 include conducting a grants workshop in February in partnership with the PA Partners in the Arts and DCNR that will also serve as a kickoff for the next round of EMHR mini-grant applications. Other projects, including a cycling initiative for Sullivan County, are pending final approval of Room Tax funding from the Endless Mountains Visitors Bureau.

Chamberlin reported that the EMHR made a $1,000 donation to the Montrose Restoration Association, which has been matched with funds from the Lions Club there to restore the poster boards on the Montrose Theater.

Discussion ensued on how to keep board members whose terms are expiring active with the EMHR as committee members. Associate members may also serve on committees. Membership renewal invoices will be mailed out over the next month.

Board member Brian Lione announced that a meeting will be held in Susquehanna County to which the three county commissioners and others will be invited. The EMHR’s funding of and guidance for projects there since 1998 will be reviewed, and ideas for new projects will be discussed.

With new commissioners having been elected in three of the four counties served by the EMHR and two long-time commissioner representatives retiring this year, Chamberlin will be reaching out to the commissioners boards in each county to ensure that they are properly represented.

The meeting was held at the Wyalusing Community Center. Board members also discussed the 2020 meeting calendar and new options for meeting places in the four counties.