By: Rick Hiduk
In: Dushore
With: 0 Comments 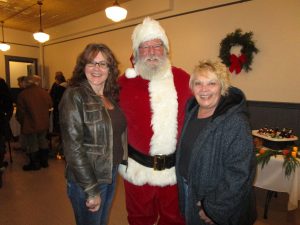 The former Fentons Clothing Store building on East Main Street in Dushore was reopened last night as Pealer Hall, a community gathering space. Guests at the event included long-time and former business owners from the borough, including the Fentons; former and current elected officials; Santa Claus; and members of the Dushore Area Business Association and the Sullivan County Chamber of Commerce, including (above, left) Candy Williams and (right) Carol Ferrell. Those in attendance were in awe of the changes to the interior, many of them having shopped there over the years at the clothing store and at the appliance store, pet shop, and drug store that preceded it. According to building owner Patty Lane, who oversaw the restoration, some exterior work remains to be done before Pealer Hall and two upstairs apartments will be available for rentals. 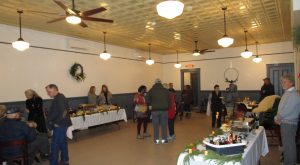