By: Rick Hiduk
In: Mental Health Awareness
With: 0 Comments 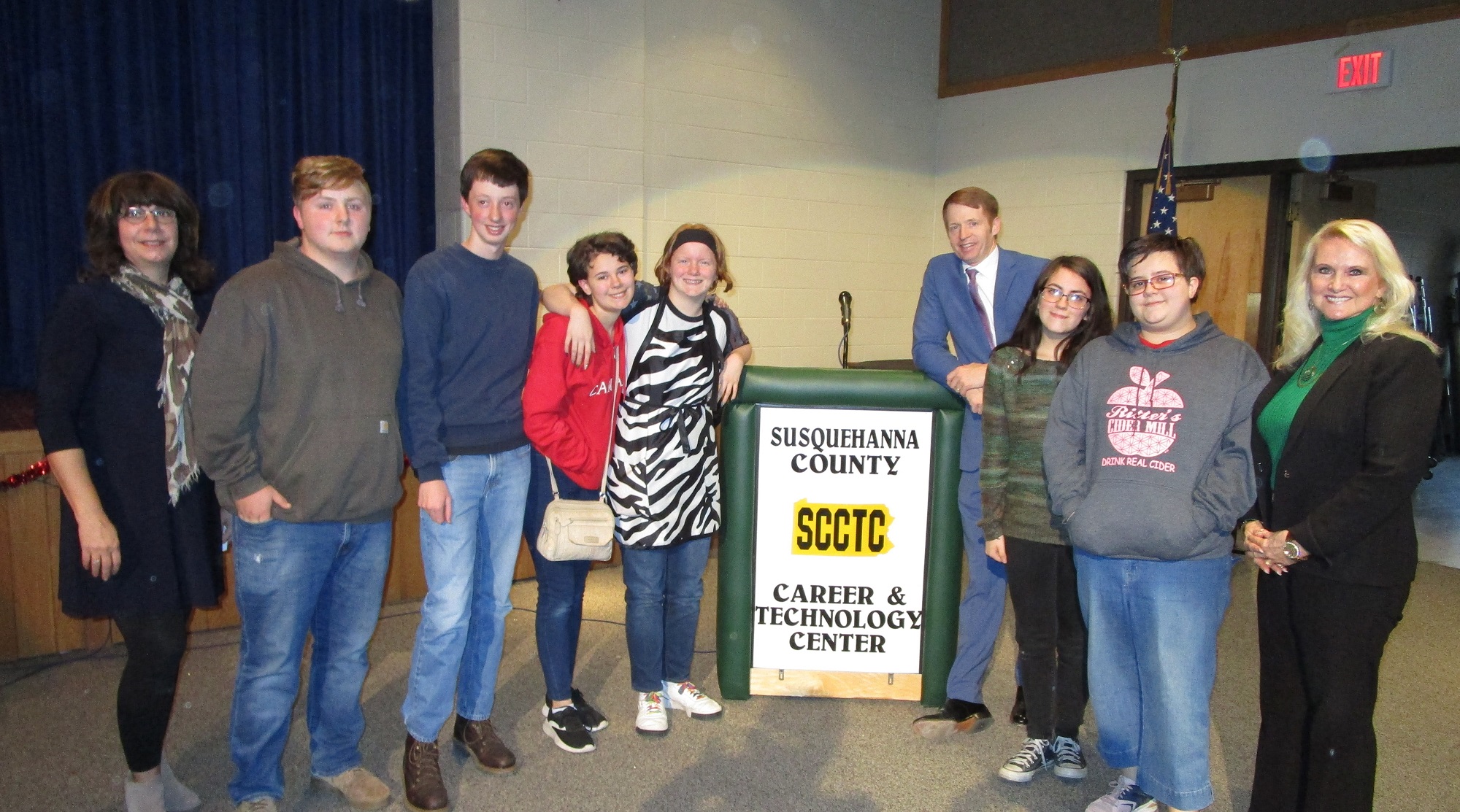 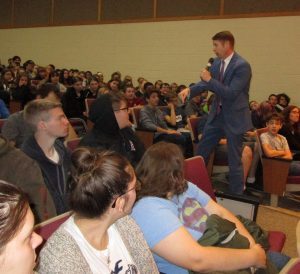 Some of those who remained after the assembly to have personal conversations with motivational speaker Brooks Harper (top, right of podium) included (from left) Kim Merithew of the United Way of Susquehanna County, students Jarrett Schoonover, Ian Bender, Colette Brisson, Emily Michaels, Lexie Meckwood and Lillian Hinkley and SCTTC director Dr. Alice Davis. Above, Harper presses the Elk Lake and SCCTC students for their thoughts on positive thinking and avoiding negativity.

Most of the student body at Elk Lake from sixth- through 12th- grade, plus students from the Susquehanna County Career & Technology Center (SCCTC) enjoyed some good laughs and took in the serious messages presented by motivational speaker Brooks Harper on Nov. 19. SCCTC superintendent Alice Davis had seen Harper speak at the 2017 PA Association for Career & Technical Education and felt that his themes were especially appropriate before Thanksgiving and Christmas.

“We all have something on our plate. The important thing is how we deal with it,” Davis told the students prior to introducing Harper. “We’re all at different levels in our lives. It’s important to ask for help.”

After the program, Davis told the Susquehanna County Independent that depression among youths increases as the weather gets colder and the days get shorter. So too do instances of teen suicide. “We wanted to get this in and help the children understand the importance of mental wellness before the (onset of the) stress of the holidays,” said Davis.

Harper, who calls South Carolina home, conducted two presentations at the school that day, telling stories and giving advise that supported the acronym C.H.I.L.L.L. – Count your assets, find Healthy outlets, Invest in yourself and the return into others, Let go of the trivial and resentment, learn to Lean on each others for help, and Laugh.

With a hyper-paced delivery that commanded the attention of his young audience, Harper showed them just how effective laughter can be when it comes to reducing stress.

“They say that your generation is the most anxious,” Harper remarked. “But 90 percent of the things we worry about don’t take place. And sometimes things happen to us that are not of our own making.”

Harper credited a series of mentors who helped him focus on the positive elements in his life, to adjust his own lens of perspective, and to embrace the power of gratitude.

“Our student body is made up of diverse backgrounds. However, everyone feels stress,” SCCTC health care technologies instructor Darlene Drake related in her review of the assembly. “Brooks told of how his 12-year-old daughter was so stressed that it affected her autoimmune system. This validated our students’ feelings of stress.”

Among the first adults to help a pre-teen Brooks recognize his own potential and develop the confidence to speak in public was a counselor at a Boys & Girls Club his mother had him join after Brooks’ father walked out on the family. The club provided a healthy outlet for him and his siblings, and Brook was asked to speak on behalf of the club for an important fundraising campaign. It was the first time, he noted, that he ever heard applause directed at him.

He encouraged audience members to take full advantage of school organizations that broaden their horizons and build bridges to the future. The best mentors and teachers, Harper suggested, match classroom learning with real-life experiences. All mentors are not adults, he added. “Any of you can fill that role for someone,” he stated. “Helping other people is one of the greatest medicines in the world.”

Another big inspiration in Harper’s life was Joel Sonnenberg, a fellow motivational speaker who, at 22 months old, was the victim of a vehicle accident and subsequent fire that left him with burns on more than 85 percent of his body. Harper met Sonnenberg in an airport, and the two struck up a friendship in which Harper continues to find inspiration.

Harper suggested that most students can be assigned to three categories: those who make it happen, those who watch it happen, and those who ask, “What happened?” To be among the first group, he suggested, “get the right people around you in life. Sometimes the person you need to be rolling with may look and be very different from you.”

Harper also touched on social media, encouraging the teens to keep their posts positive and to stand behind their own names. “The most valuable thing you own is your name. It’s your brand,” he explained. “Make sure you are giving your followers nutrition instead of junk food.”

On that note, Dr. Davis further cautioned the students to not get wrapped up in the negatives of social media. “Everybody has a right to an opinion,” she remarked, “but you have the right as to whether you accept it or not.”

“His message is important for all ages, and he makes you realize that mental health should be a priority and not an embarrassment,” SCCTC cosmetology instructor Kim Cosklo said in her summary of the assembly. “Students were very receptive to Brooks’ message. He presented it in a way that directly related to the students and managed to keep them engaged.”

Many students remained after both presentations to personally thank Harper for his inspiration and to share personal stories with him. Harper in turn gave them cards with his email address and asked them to stay in touch.