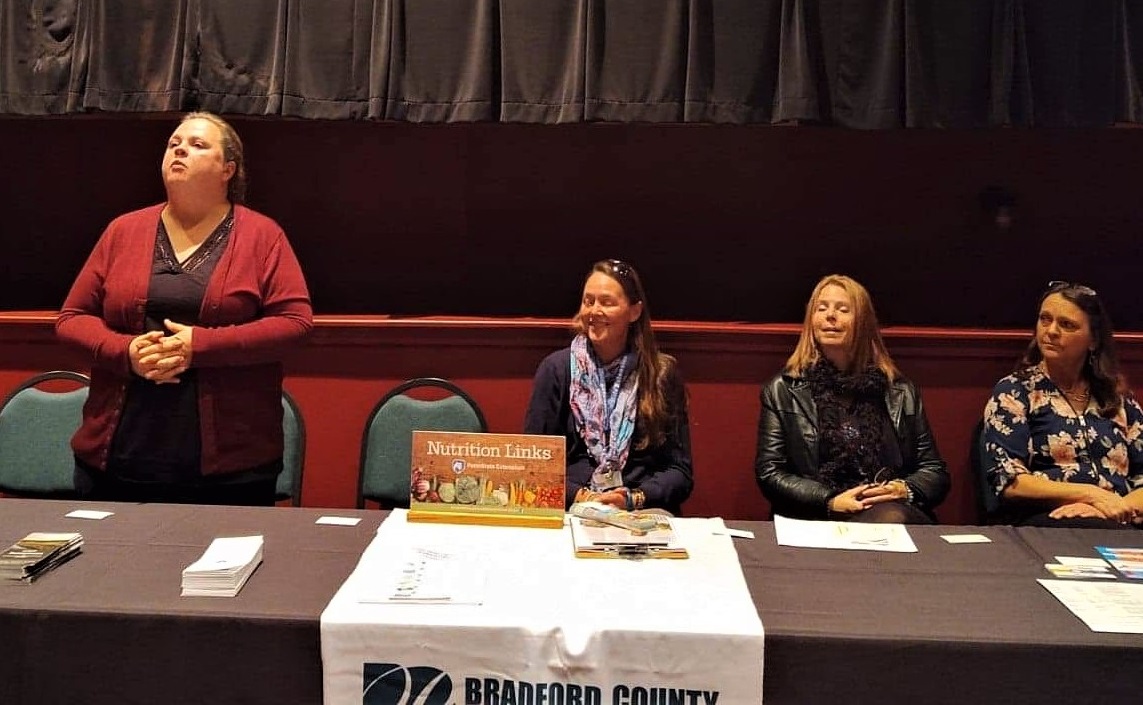 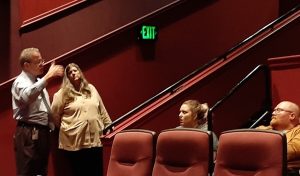 The Library System of Bradford County, in collaboration with Wyalusing Rotary, hosted a free viewing of the movie “The Public” followed by an informative discussion about hunger and homelessness Nov. 21 as part of the Bradford County Regional Arts Council Community Conversations for Social Repair series.  Representatives from many organizations provided keen insight to the more than forty attendees at the event held at the Keystone Theater.

The film focuses on a Cincinnati Public Library staff member torn between local politicians and protecting homeless patrons during a vicious cold spell.  Written, produced, and starring Emilio Estevez, “The Public” was well received by the audience. “This movie shows that everyone in any occupation can help the homeless,” said Amanda Boyer, Director of the Bradford County Grants Department.

After a brief intermission, a panel of community organizations assembled to share their knowledge and roles in serving individuals facing food and housing insecurity in the area.  Among those present were Amy VanBenthuysen, Housing Specialist under the Bradford County Human Services Department, Tammy Storrs, Director of the Endless Mountain Mission Center, Jodilyn Coleman, Nutrition Education Advisor of Penn State Extension, and Michael Burger from the 2020 Census.  Representatives from Tioga Bradford Housing and Rehabilitation Authority, Child Hunger Outreach Partners, and Mission First Housing provided information and brochures though they were unable to attend.

Library System Administrator Lea Chisum-Chaffee began with the finding that 1 in 8 individuals will experience housing or food insecurity in their lifetime.  Raising her hand, she stated “I am 1 in 8” and shared her experiences both as a child in rural Texas and as an adult working for low-income housing organizations in Bradford County.  “While the level of mental health, homelessness, and addiction featured in the film is more indicative of suburban areas”, she affirmed, “these factors are daily issues our local libraries and community organizations face.”

Monroeton Public Library Director Karen Troup echoed this concern.  “It is disturbing to realize how Bradford County lacks emergency housing as portrayed in the film and public discussion.”  Troup referenced provocative statistics provided by Endless Mountains Mission Center Director Storrs who stated that in a 365 day period, her organization filled 3000 beds.  “EMMC is the only homeless shelter in Bradford County giving emergency housing to those totally homeless,” Storrs explained. The Center remains full throughout the year and like many area organizations, must turn away some people due to lack of resources.

The panelists agreed that more work is needed–  more beds, funding, visibility, and maybe even new ideas.  Janenne Goliash, Legislative Aide to Senator Gene Yaw and board member of the Tioga Bradford Housing and Rehabilitation Authority explained, “The Bradford Sullivan Local Housing Options Team (LHOT) meets to address housing barriers to county residents.  In 2010/11, LHOT began seeing a need for a way to address housing needs in a more comprehensive way.” This led to a joint effort between the team and local service providers and agencies to begin tracking the data. “Although the data cannot be considered comprehensive because it is all collected voluntarily, we do have data now that gives us a history of the housing needs in Bradford County.”  The accumulating information has resulted in a number of local efforts to address these needs including the creation of a county-level housing specialist position secured in part by Grants Department Director Boyer with statistical input from Goliash and EMMC.

“Hunger and homelessness is not a holiday event, it is a year round concern affecting our community,” stated Penn State Extension representative Coleman.  “Together, we can all make a difference in someone’s life affected by this travesty.” Suggestions for ways to address these issues included participating in food, financial, and clothing drives, volunteering with organizations focused on these topics, and spreading the word.  “Providing this information for the community is an important step to finding a solution to this serious situation,” concluded Peg Huyck, Coordinator of Helping Hands Food Pantry based in Wyalusing.

One out of the box solution appeared in the form of Mr. Burger.  “The upcoming decennial census of 2020 requires the civic engagement of the public throughout the towns, villages and municipalities of Northeastern Pennsylvania,” he stated.  These vital numbers are irrevocably tied to many state and federal funding streams that flow into the area including transportation, education, libraries, roadways, and assistance programs such as public housing, LIHEAP, HeadStart, CareerLink, and more.  The numbers provided by the 2020 Census will shape those organizations for the next ten years until the next Census. The good news? “Census 2020 will be simpler, having three ways to respond to a very short and simple count of the nation’s population.” The Library System of Bradford County committed to supporting and providing assistance with educational and technological aspects of the Census.  “Our doors are open to help the community apply to work for the census, to complete their census reporting during the count, and answering questions about the process,” Chisum-Chaffee stated.