By: Rick Hiduk
In: Election Coverage
With: 0 Comments 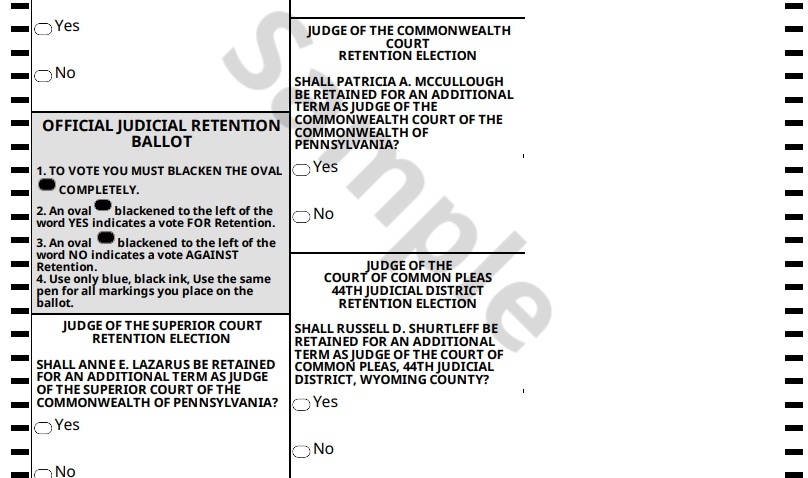 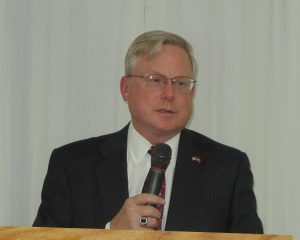 The last question on the final page of the ballot (top) for the Nov. 5 election in Wyoming County asks voters whether or not president Judge Russell Shurtleff (above) should retain his seat for another 10-year term. In Bradford County, president judge Maureen Beirne (below) is also up for retention. 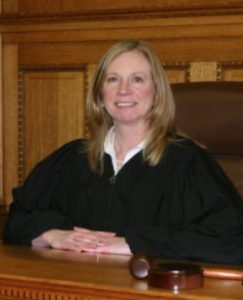 Some voters heading to the polls on Nov. 5 may be surprised or a bit confused by a series of questions found on the last page of their paper ballot. Among a set of initiatives dictated to county election officials by the state are a number that address retention for judges, from the state’s Superior Court down to the county Court of Common Pleas. A simple yes or no vote can determine whether or not each county’s president judge retains his or her place on the bench for another 10 years without having to campaign for the seat along with other elected officials.

According to BallotPedia.org, Pennsylvania is one of four states where retention elections follow an election of a judge by popular vote. It wasn’t always that way, and it could change again, which is why, perhaps, so many people seem to be taken off guard by the initiative and its significance.

Another factor is that the retention vote occurs a full year before the judges’ terms expire. If they opt for the retention initiative, they must file a request with the state, which sends the issue back to the county election board with other such approved requests as mandates.

“In the year before their term will expire, they have to decide whether they want to continue on the bench,” said Wanda Murren, PA Department of State Office of Communications and Press director. “If they are not because they are retiring or resigning…we need to know that early on in the year so that potential candidates have time to circulate petitions and get themselves on the primary ballot.”

In the Endless Mountains, two president judges are eligible for retention this year and petitioned for a retention vote. In Bradford County, Maureen Beirne is on the ballot as the president judge of the 42nd judicial district. Sullivan and Wyoming counties together comprise the 44th District Court of Common Pleas, over which president Judge Russell Shurtleff presides. He is also up for retention.

Beirne was appointed to the Bradford County bench in 2008 by then Gov. Ed Rendell to replace Judge John Mott, who opted for a retention vote and lost. Beirne then successfully campaigned to retain the seat in 2010, thus making her eligible for retention this year. Having a larger population than Wyoming and Sullivan counties combined, Bradford County has a second full-time judge, Evan Williams, who was elected by popular vote in 2016 and who will be eligible for retention in 2025.

Shurtleff beat attorney Judd Fitze in the 2010 election, winning both the Democratic and Republican nominations in the primary and running unopposed that fall.

There is no retention question on the ballot in Susquehanna County because president judge Jason Legg will not be eligible until 2025, having successfully run in 2015 for the post there upon the 2014 retirement of 27-year judge Kenneth Seamans.

Beirne, generally speaking, is popular among Bradford County voters and not mired by any controversy. Her retention, it would seem, is assured, unlike that of her predecessor. Shurtleff faces a steeper challenge, at least in Wyoming County.

There is a marked difference between Sullivan and Wyoming counties that voters are considering as they head to the polls, among them a perceived desire by Judge Shurtleff to have a new prison constructed in Wyoming County. Shurtleff has long contended that the facility built in the 1980s on the footprint of a century-old jail in Tunkhannock was already obsolete when it was finished.

He has dismissed ongoing reports of overcrowding in the Wyoming County prison system as ignorant of the real crises the county is facing. Those whom are convicted by Shurtleff in Sullivan County go to the Columbia County Prison, with which Sullivan County has a contract. Therefore, Sullivan County never deals with the costly issue of outsourcing that has plagued Wyoming County.

The population of Wyoming County has been stable or slightly lower, however, since the current prison was constructed. The bulk of the arrests and convictions in the past decade are drug-related, but the prison has also become home to many in the county who have fallen behind on payment of child support and/or court costs. Others are jailed because they have broken rules associated with their terms for probation or parole.

Bradford County struggled with prison overpopulation for several years until a series of measures, including the establishment in 2013 of a supervised bail program, were enacted to stem the tide of outsourcing. While the program takes a considerable amount of time to manage, according to Bradford County prison warden Don Stewart, supervised bail keeps as many as 100 low-level offenders out of the prison system at a time. During a Bradford County Prison Board meeting in 2016, Judge Beirne added that the program has been effective in getting prisoners with substance use disorders into treatment programs more quickly.

When Wyoming County’s bulge in prison population was deemed a crisis by the commissioners in 2016, an emergency meeting was called during which supervised bail was discussed. The prison board agreed to start the program, and the Parole and Probation Department was granted approval to hire a full-time staff member to administer supervised bail. The program never got off the ground, however, and the new employee simply became another probation officer, assigned to an ever-expanding roster of court-sentenced citizens under surveillance. 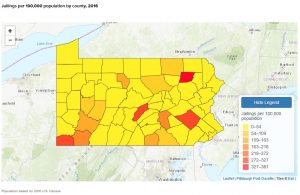 In a Pittsburgh Post-Gazette story written in 2016 by Christopher Huffaker titled “Modern Day Debtors’ Prisons,” a map was used to illustrate the disproportionate percentage of citizens near Pittsburgh who had been incarcerated. The focus of the article was a growing trend among Pennsylvania counties to fill their prisons with people who owe money and can be deemed “unwilling to pay.” Benign to Huffaker’s story, but glaringly obvious on the map was Wyoming County standing alone in northeast Pennsylvania with 327-381 people out of 100,000 (or .38% of the population) in jail. Neighboring Sullivan and Susquehanna counties are in the 0-54 (.025%) range and Bradford County is 54-109 per 100,000 (or .078% of the population.)

Copies of a letter reportedly left on windshields and in a few mailboxes in Wyoming County last week brought the retention ballot initiative to the attention of a lot of people who were not previously familiar with it after it was posted on Facebook. The crudely-composed statement by the otherwise unknown Concerned Voters of Wyoming County drew a firestorm of criticism for both the concept of judge retention and the confusion caused by some errors in the letter.

Based on the thread of comments, Judge Shurtleff clearly has his fans, but his detractors also made themselves known with numerous derisive statements. Overall, the comments seemed to point to a desire to have Shurtleff conduct a “traditional” campaign. “If it’s politics as usual in our county, Judge Shurtleff will win anyway,” one Facebook user stated.

None of those chiming in on social media indicated an awareness that the same initiative appears on the ballot in Sullivan County, even though it is worded somewhat differently. Should Sullivan County voters overwhelmingly support the judge retention initiative, their votes could negate a modest effort in Wyoming County to prevent it.

In 2018, a surprisingly high percentage of Sullivan County’s 4,349 registered voters went to the polls during an off-year election. “It’s not huge,” Sullivan County director of elections Hope Verelst said of the 2,600 residents who cast ballots last year. “But it is a significant if they all vote yes.” 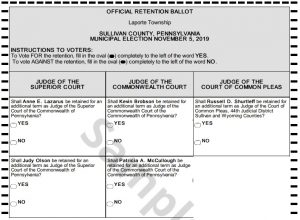 The question took Murren by surprise. She found that the Sullivan/Wyoming counties’ joint judicial district is one of only a few in the state. Nonetheless, the two counties cannot respectively reach separate decisions.

“All the votes go into one pot. One more vote for ‘yes,’ and the judge keeps his seat,” Murren explained. “If the judge’s retention is rejected by the voters, a vacancy is created.” In that instance, the governor appoints and Senate confirms someone to fill the vacancy until the next judicial election, in which any qualified candidate can seek the office.

Judicial elections are held in odd number years, Murren continued, “So, if the judge were to fail on the retention bid this year, the person appointed to fill the vacancy would serve until the 2021 election.”

It has been incorrectly reported elsewhere that party line diehards will not see the extra questions if they vote a straight party ticket.

“That is not true,” said Bradford County director of elections Renee Smithkors. “Those questions will still come up. Even if they select a straight ticket, they will still have to answer those questions. So they can’t say that they didn’t see it.” The judge retention questions will come up one more time on the digital summary page after the paper ballot is submitted, Smithkors added. “(The voters) have to review it before they are done.”

As for the push by some to return to the practice of having the governor make all judicial assignments down to the county level and abolishing the popular vote, Smithkors conceded that there are calls for changes in election policies every year with little movement on that particular issue. “I’d be surprised if it occurred,” she stated. 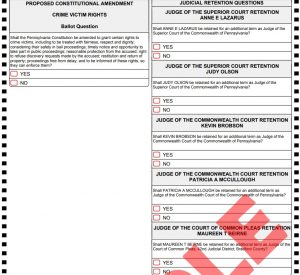