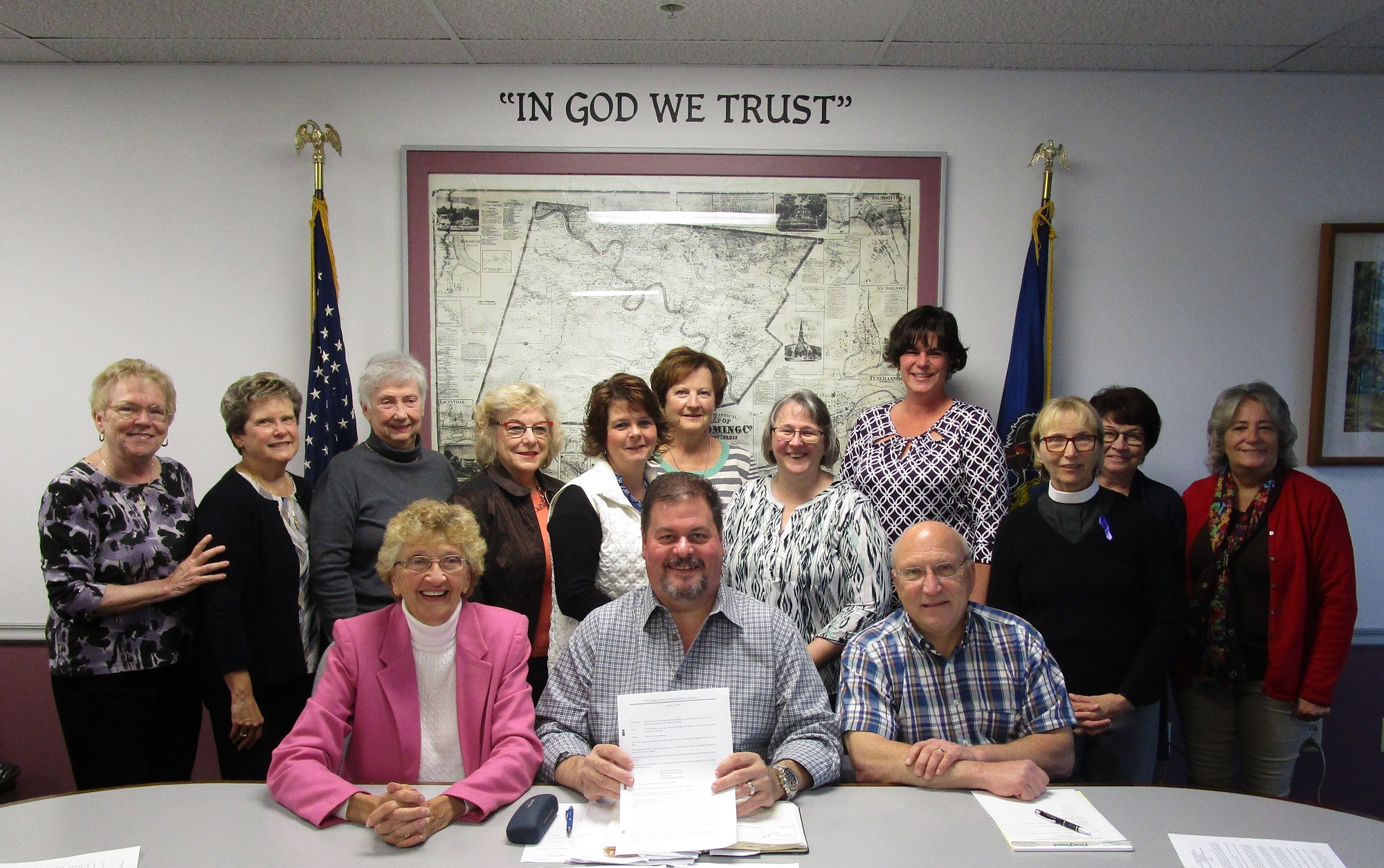 Though Wyoming County Commissioner Tom Henry suggested that Tuesday’s public meeting of the commissioners might be a short one, based on a sparse agenda, numerous topics were brought to the floor, some celebratory and others more sobering.

The Oct. 15 meeting opened with public commentary from three members of one family who have pushed concerns about child neglect past local authorities to the regional and state level. Henry was quick to acknowledge the seriousness of their accusations and that procedures surrounding the care of a male infant were questionable. But he also cautioned the family to refrain from divulging details as would the commissioners in the course of the public meeting.

“As commissioners, we are aware that something out of the ordinary has happened here,” Henry stated. “There is a young child involved, and I do want to make sure that the child is protected.”

Family members maintain that the child’s mother, whose care he was under, admitted to long-term drug use and was tested positive for methamphetamine. The child reportedly fell from a stroller, leading to scratches and bruises on his face, and family members do not believe that he received adequate medical attention.

“Accident’s happen. I’m a parent. I know that,” the great aunt of the child remarked. “But it’s how you handle an accident after it happens.”

What family members wanted the commissioners to know, in particular, is that there is not enough information available as to where other family members can turn to have their concerns addressed when matters such as this arise. The great aunt maintains that her calls to Wyoming County Children & Youth (C&Y) services were not returned in a timely manner, and her concerns were generally dismissed. She expressed gratitude to county human resources director Mike Donahue for directing the family to Childline, a hotline to the state C&Y agency and child abuse registry, and Judge Russell Shurtleff, who placed the child in temporary physical custody of an aunt and uncle.

The crux of the confusion and frustration seems to hover over the fine line between the C&Y designations of CPS, which specifically addresses “child abuse,” and GPS, which refers to the “potential for harm.” Though determining the degree of the situation can be challenging to authorities, the responses, as shown on the chart below, vary greatly. 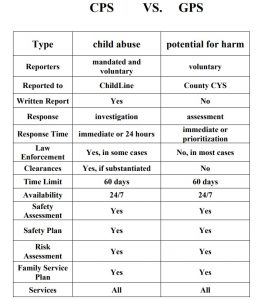 Audience member Jackie Simmons, who works at the Wyoming County Special Needs Association, explained that reporters at that agency are mandated to contact Childline if ever there is a question between CPS and GPS. Lori Bennett of Wyoming County Special Needs added that law enforcement officials should be notified, as they are also authorized to make that determination.

The uncle, with whom the child now resides, responded that municipal police were involved but did not do enough to advance the situation. “He should have known what to do,” the uncle stated. “I think they need more training.”

“We thought the right parties were involved,” the great aunt said in summing up her presentation to the board. “We didn’t think we’d have to call an 800 number before relying on our local authorities.”

In the course of approving the annual Phare (PA Housing Affordability and Rehabilitation Fund) grant, which is coordinated locally by Trehab, Henry reported that the agenda had also recently been approved for SCA (single county authority) funding. Trehab is now authorized as a provider for substance abuse services, including working with the Drug Court and assisting in the transition of inmates with substance use disorders back into society.

Henry complimented Mike Donahue for his work in getting the Luzerne-Wyoming County Drug & Alcohol Program to release the funds directly to Wyoming County and added that he is hopeful that the involvement of Trehab and the grant for $600,000 recently acquired by Donahue and the district attorney would help to turn the tide of the county’s drug-related issues.

The Phare grant of $125,000 is geared to first-time home owners and can be used to offset down payments and closing costs. It has been managed efficiently by Trehab in the past, commissioner Judy Mead noted. According to information provided by Trehab, $309,000 has been allotted through the program over the past three years, helping with the purchase of 31 homes in Wyoming County for 92 individuals.

Members of the Tunkhannock Business & Professional Women visited the commissioners to celebrate and bring attention to the achievements of working women in Wyoming County as part of National Business Women’s Week, which began in April 1928 and is now observed during the third week of October.

Group president Julianne Miller noted that this year’s focus is on “women’s working choices,” which include pursuing a career in an existing company, starting a business of their own, or staying home with children. “Some women are not able to make these choices,” Miller noted, adding that the upcoming elections provide an opportunity for women to vote for candidates who support the rights of woman in the workplace. The Business & Professional Women got their start in 1919, she noted, and the right for women to vote was granted the next year.

Mental illness, substance use disorders and homeless often walk hand-in-hand. In metropolitan areas, agencies and task forces staffed by a combination of administrators and volunteers are better equipped to deal with the problem than in rural communities like Wyoming County. Concerned citizens are quick to post their observances of those they see as lost and neglected on social media without fully understanding the circumstances.

Lori Bennett pointed out that the onset of colder weather makes the plight of homeless people more obvious, but assisting those people or even getting them under a roof is difficult. “Just so the public knows that we are not ignoring them,” said Bennett, noting that at least three such individuals are currently under surveillance. “Unless they are considered a danger to themselves or others,” she added, “there is nothing we can do with them. There’s a fine line that we and the police cannot cross.”

“It’s really discouraging,” commissioner Henry concurred, referring to the previous attempts by county officials to link homeless individuals who don’t want help with available services. “One young man has a place to go, but won’t.”

Factoring in the mental health issues some are dealing with, Jackie Simmons added, “It’s not a ‘want.’ They don’t comprehend the options. It’s difficult to have a practical conversation with them,” she explained. “The efforts (of authorities and well-wishers) might better be spent on establishing a shelter for them.”

Commissioner Mead announced that sample ballots for the upcoming municipal elects are not only available on a table just outside the Elections Office in the courthouse but also on the county’s website. In addition to finding them listed by municipality on the Board of Elections page, the ballots and a map to voting locations are accessible from the front page of www.wycopa.org by clicking on GIS/Mapping and following prompts for “Where do you Vote.”

The new election machines are programmed and ready for Nov. 5. Voters will fill out ovals on a paper ballot that is then fed through the machine to be counted electronically. The paper ballots then drop into a bin from which they can be retrieved if the need for a manual recount arises. Write-in votes can easily be conducted on the touch screen.

While the quality and dependability of cell and internet service in Wyoming County is almost always in question, Tunkhannock businessman Joe Sick brought to the attention of the commissioners during a meeting this summer that service from one company in particular – Verizon – had greatly diminished from that which long-time users were once accustomed.

At that meeting, Sick and others stressed that there were many areas in the county where they used to get service, including their homes and businesses, where they can no longer get a signal.

Mead related that the commissioners had met with Verizon officials who were to do testing in some of the specific areas of concern and report back to them at a later date. “We hope to meet with them again,” said Mead.