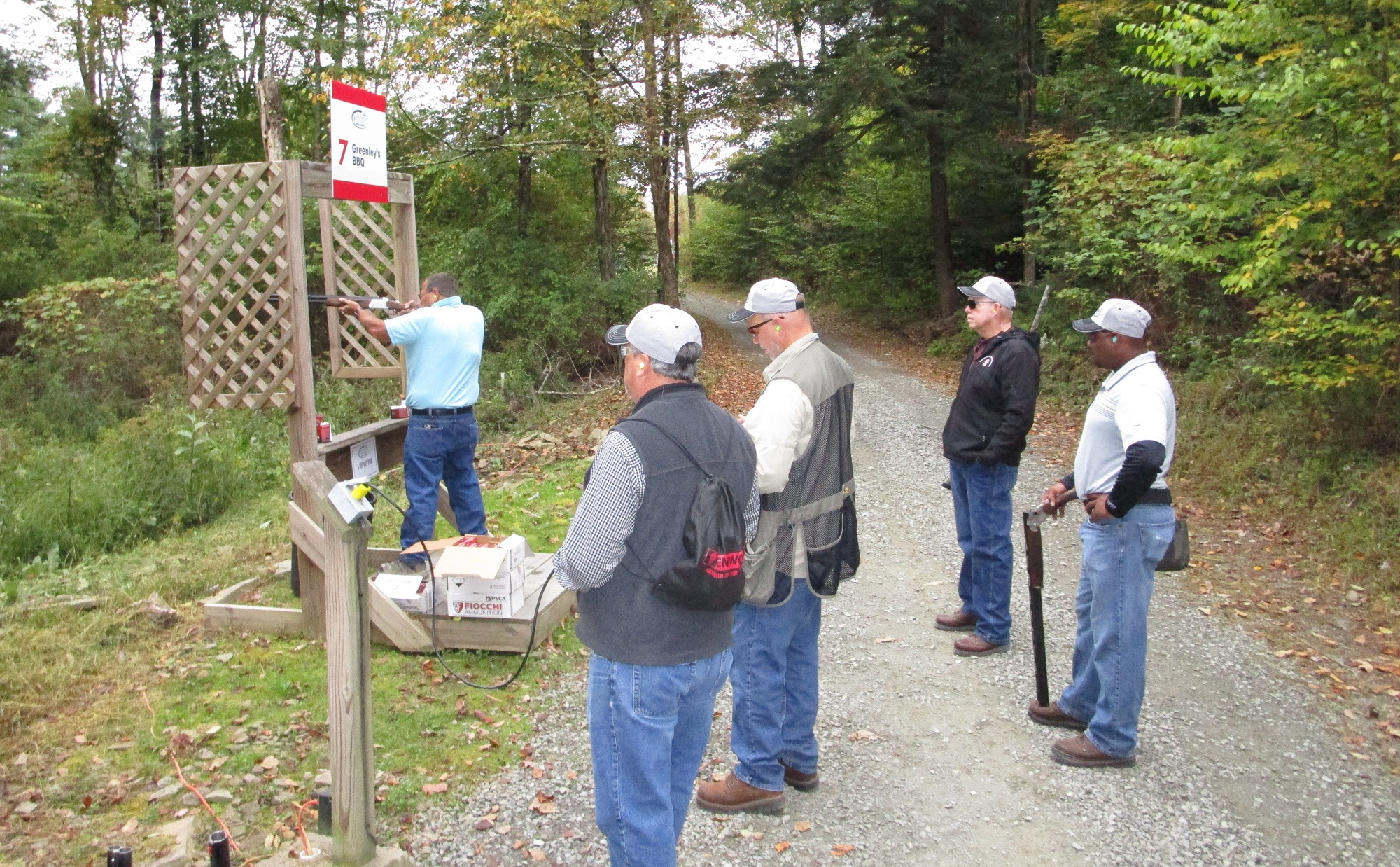 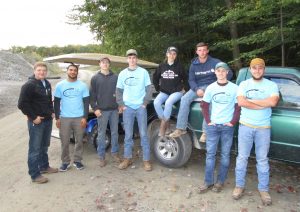 Students and administrators from the Lackawanna College School of Petroleum & Natural Gas completed their second full round as coordinators and managers of the annual Sporting Clay Tournament that bears their name and supports their efforts to move qualified students directly to the gas fields. Approximately 165 shooters took to the ranges at Houseman’s Hidden Hollow sporting club near Friendsville on Sept. 26.

The fundraiser was started seven years ago by Cabot Oil & Gas Corporation, which remains a large supporter of the event, sponsoring the Green Course this while Southwestern Energy (SWN) sponsored the Red Course. Both companies also had representatives among the shooters, as did dozens of other energy partners and local businesses who had sponsored the shooting stations. 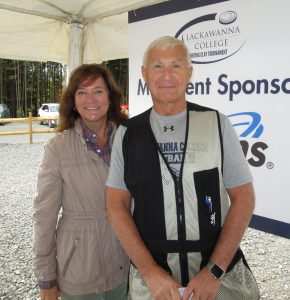 “There are a lot of returning teams and a lot of excitement this morning,” said Lackawanna College (LC) president Mark Volk (above, right). He was beaming as he watched shooters approaching the registration tables along with LC director of development Mariellen Walsh (above, left), who expressed her gratitude for the participating companies who are helping the program grow at the school in New Milford.

With registration complete, Volk joined LC vice president for college advancement Brian Costanzo, Bill desRosiers of Cabot, and Susquehanna County commissioner Alan Hall under the big tent for welcoming remarks and a safety talk. Volk commented on that fact that Lackawanna College is the lowest-priced independent college in Pennsylvania. Hall remarked on the dedication of county residents to preserving the second amendment to the U.S. Constitution – the right to bear arms.

Then the men and women were off, shotguns in hand, tabulating each other’s scores at 10 stations each on one of the two courses, plus tackling some alternate stations where they could pick up raffle tickets for some special prizes.

As he climbed onto a shuttle with the other members of his singles team, Bill White of K9 Corral in Scott Township explained that he got involved with the fundraiser when Cabot started it, as his son, Bill, worked for the company. The elder Bill admits to being a pretty good trap shooter, but clay shooting presents a bit of a challenge to him. “I’m terrible at this,” he laughed, “But it’s fun.

Morning sun did give way to some sprinkles and light showers, but the spirit of the contestants remained high as they returned to the big tent for lunch served by Greenleys BBQ and announcements of the winners.

Team winners were Scott & Longacre Trucking and Greenley’s BBQ, both taking first place on the Green and Red courses, respectively. Cactus Wellhead and one of two teams from SWN took second place trophies for the same courses. Top male and female shooters on the Green Course were Kyle Falkenberg, shooting for Scott & Longacre, and Julie Lewis, shooting for Leatherstocking. Nick Mattocks from SWN and Kelly Leap, representing TekSolv, were the high male and female scorers on the Red Course.

Costanzo reported about $60,000 in proceeds. The profits will be used for equipment and supplies and other student and staffing needs to help keep down the cost of tuition. This year, the school will also create a Sporting Clay Scholarship with some of the funds, he noted.

Approximately 40 students assisted with the event this year, handling registration, parking, shuttling of participants to the various ranges and other logistics. Volk noted that the tournament provides a unique opportunity for the students to meet some of their potential future employers in a recreational setting. 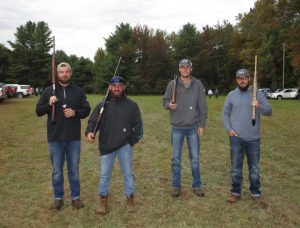 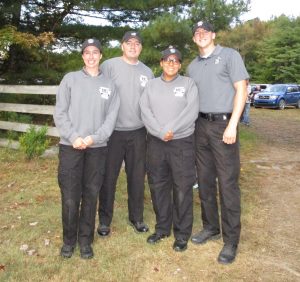 It was the first time working the event for Pennsylvania Police Academy cadets (from left) Carrielle Collins and Elizabeth Caceris, instructor Ron Hartman, and cadet Justin Morris. In addition to helping the school raise funds, Collins noted that the even gives the police cadets an opportunity to work around people using firearms. “We are getting into the business of using guns,” she remarked, crediting Hartman for helping to make the experience relevant. 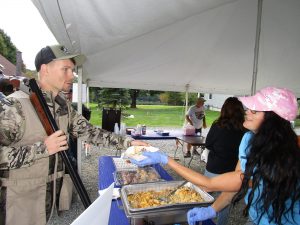 Gretchen Richmond of Greenley’s BBQ serves a breakfast wrap to tournament participant Logan Redolphy, who would be shooting with the Cactus Wellhead team, which took second place on the Green Course. 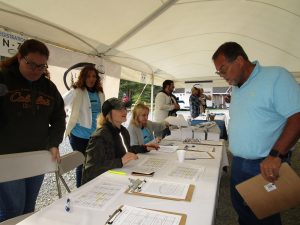 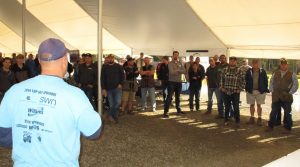 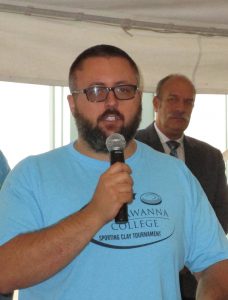 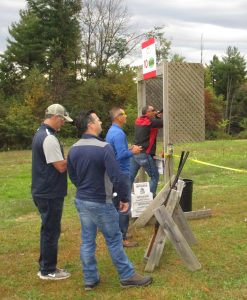 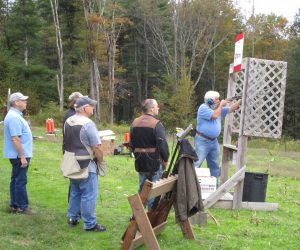 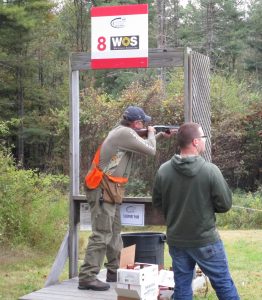 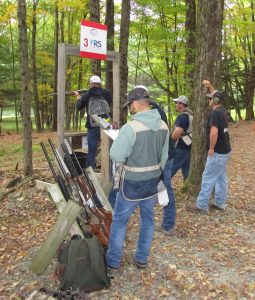 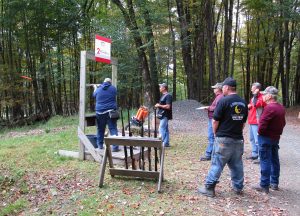 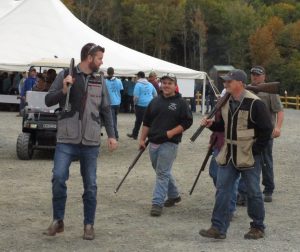