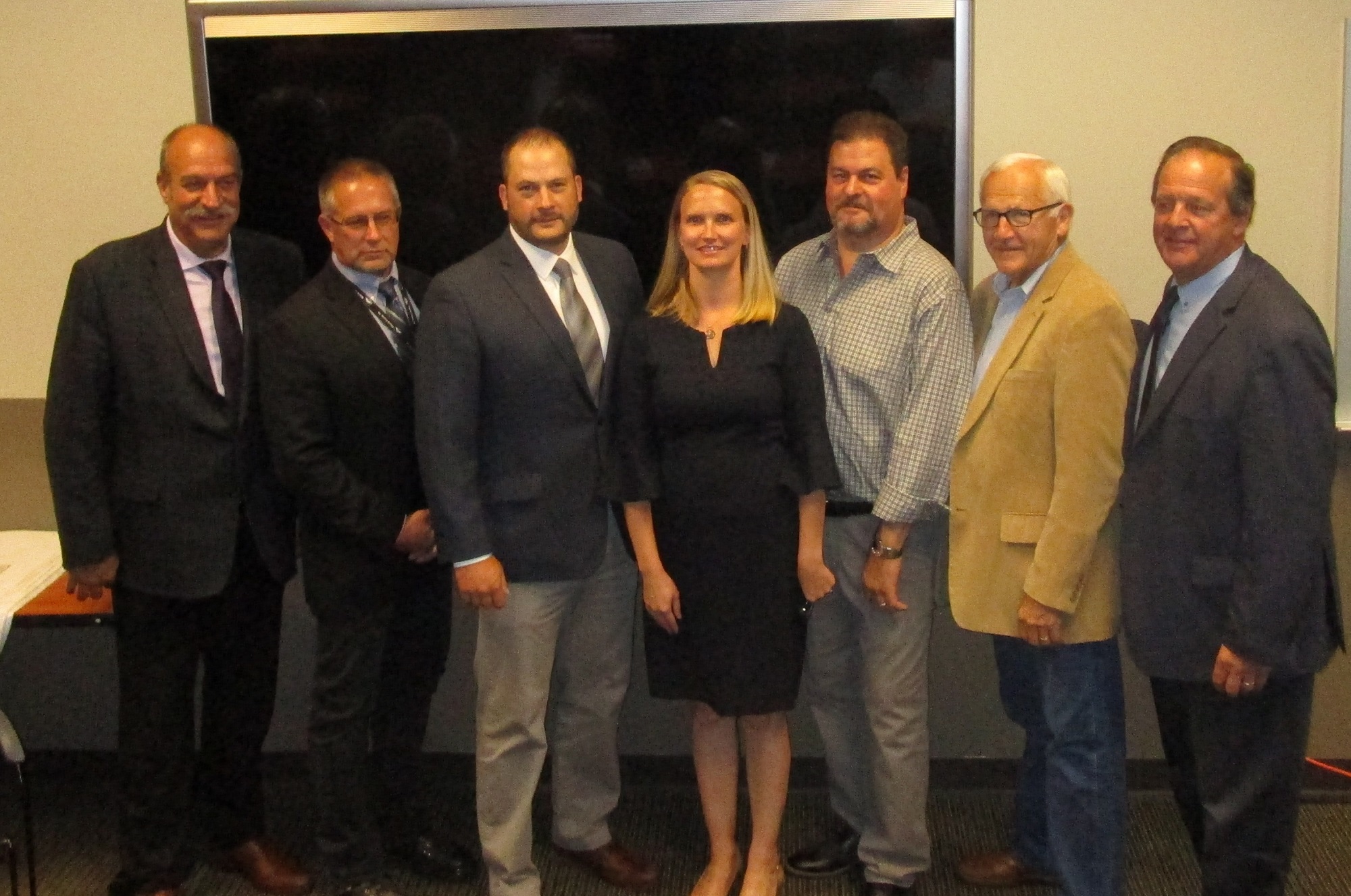 Whether one calls it an “impact fee” an “income tax” or simply by its legislative term, “Act 13,” the funds assessed to gas drilling and distributed to municipal governments in Pennsylvania have topped the $1.7-billion mark and are immensely popular with elected officials and leaders of commerce.

At an event held on Sept. 20 at the Wyoming County Emergency Operations Center (EOC) in Tunkhannock, the companies operating in the Marcellus shale were also recognized for being good neighbors. Commissioners from three northeast Pennsylvania (NEPA) counties gathered with state representatives and the president of the Marcellus Shale Coalition to tout the effectiveness of returning the money collected from the gas companies to the parts of the state that are most affected by the industry.

Sen. Gene Yaw, who represents Lycoming, Sullivan and Bradford counties, as well as parts of Union and Susquehanna counties, applauded the designers of Act 13 for the simplicity of the process and the ease by which the communities in the Marcellus shale region receive the money. 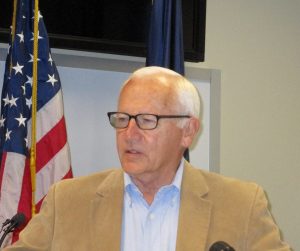 “There is no grant process. You don’t have to fill out an application. The PUC applies the formula, and it’s sent out,” Yaw (above) related. As for the rhetoric that Pennsylvania is the only gas-producing state without a severance tax, he added, “We are the only state with an impact fee. So, it’s called a different name. It’s still a tax, and we still get the money.” Yaw suggested that Act 13 brings in more revenue for the Commonwealth than the severance taxes of the four other top gas producing states in northeastern United States combined. 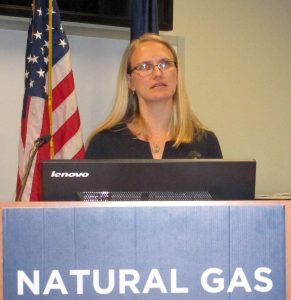 Wyoming County Chamber of Commerce president Gina Suydam, who provided opening remarks, noted that the estimated $24 million obtained so far in Wyoming County has funded crucial community projects. An additional $2 million in Pipeline Investment Program (PIPE) grants will bring natural gas to homes and business in the county seat, initially, with plans to grow the infrastructure from there. “We are honored to have the natural gas industry here and to have the impact tax,” Suydam (above) stated.

That gas will heat the county’s courthouse, prison and the EOC, Wyoming County Commissioner Tom Henry added, the safety features of each building already enhanced with Act 13 money. “We’ve been able to prioritize things that weren’t easy to do before the natural gas,” Henry (below) remarked. “We’d be lost without the impact fee.” 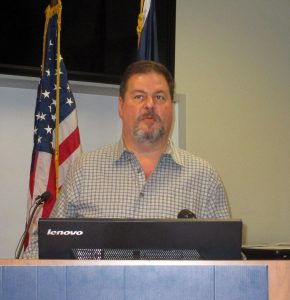 Bringing natural gas to underserved communities has taken longer than many had hoped, said David Spigelmyer, president of Marcellus Shale Coalition, but he is confident that the PIPE program will help to change that. Yaw agreed, noting, “Pennsylvania is one of the largest gas producers in the world, and half our residents don’t have access to it. That doesn’t make sense.” 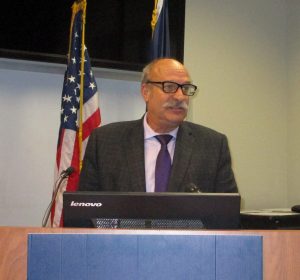 “We are doing things in our county that we never could before,” Hall (above) explained. “The county’s pension plan is 100 percent funded with no increase in county taxes since 2005. Without the impact fee, Hall maintained, “Our county would be depressed, and most of our people would be very poor as they were before. We’ve done things that have improved the quality of life for our people.”

While most of the funds return to the municipalities and counties where drilling occurs, every Pennsylvania county receives a share of the impact fee, and several state agencies get funding to be used for a variety of purposes. 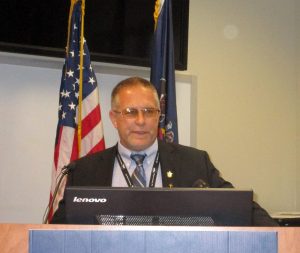 Smith (above) is convinced that the entire Commonwealth benefits from Act 13. Despite the lack of active wells there, Wayne County has received $85,000 for its Conservation District, and $55,000 has gone to the county’s Legacy Fund, which has been leveraged as “seed money” for playgrounds, river walks, and storm water projects.

“Natural gas creates jobs, and it creates stability for the farmers that feed our nation,” Smith stated. “The impact fee is essential for the future of Pennsylvania. We have an economy that is working in everybody’s favor.”

Yaw related that he and Sen. Lisa Baker, with whom he shares a much of the Marcellus shale play, have collaborated in taking on the DRBC. Yaw has joined in lawsuits against the DRBC as chairman of the Environmental Resources and Energy Committee. “I think that it is egregious what that agency has done to parts of Pennsylvania. It’s controlled by people who aren’t from Pennsylvania, quite frankly, and that’s part of the problem.”

Rep. Jonathan Fritz, who serves constituents in Wayne and half of Susquehanna County, took on both the DRBC and proponents of the severance tax. Citing a minimal environmental impact and a 29 percent reduction in CO2 emissions since 2005, Fritz also voiced his opposition to sending gas tax revenues into Harrisburg’s “black hole.”

“Pennsylvania has second highest corporate tax rate in the nation. States that are uninviting to business see population decreases,” Fritz asserted. “We have found that elusive balance. We have found that sweet spot. The silent majority has to rise up and stand shoulder to shoulder against these elitists.”

Yaw shared some sobering thoughts on the concepts of “renewable energies” that have gained momentum under “green movements,” maintaining that their ecological footprint and environmental impacts are larger than is believed.

“Renewable energy isn’t free,” Yaw stated. A single wind tower constructed to produce electricity requires 900 tons of steel and 15 tons of concrete, he cited as an example, and the cobalt needed for the batteries associated with solar farms comes from mines in the Republic of Congo, where workers toil in unsafe conditions for low wages. Solar panels last 35 years at best.

Yaw pondered why nobody questions such facts. “There are some nasty things in solar panels. How are we going to recycle this stuff?” he asked. “People need to think further ahead. It makes no sense to not embrace the gas industry, and we’ve done that.”

2019-09-30
Previous Post: ‘Celebration of Recovery’ Held in Tunkhannock
Next Post: New Antiques Shop to Open in Laceyville on Thursday