By: Rick Hiduk
In: Local Talent
With: 0 Comments 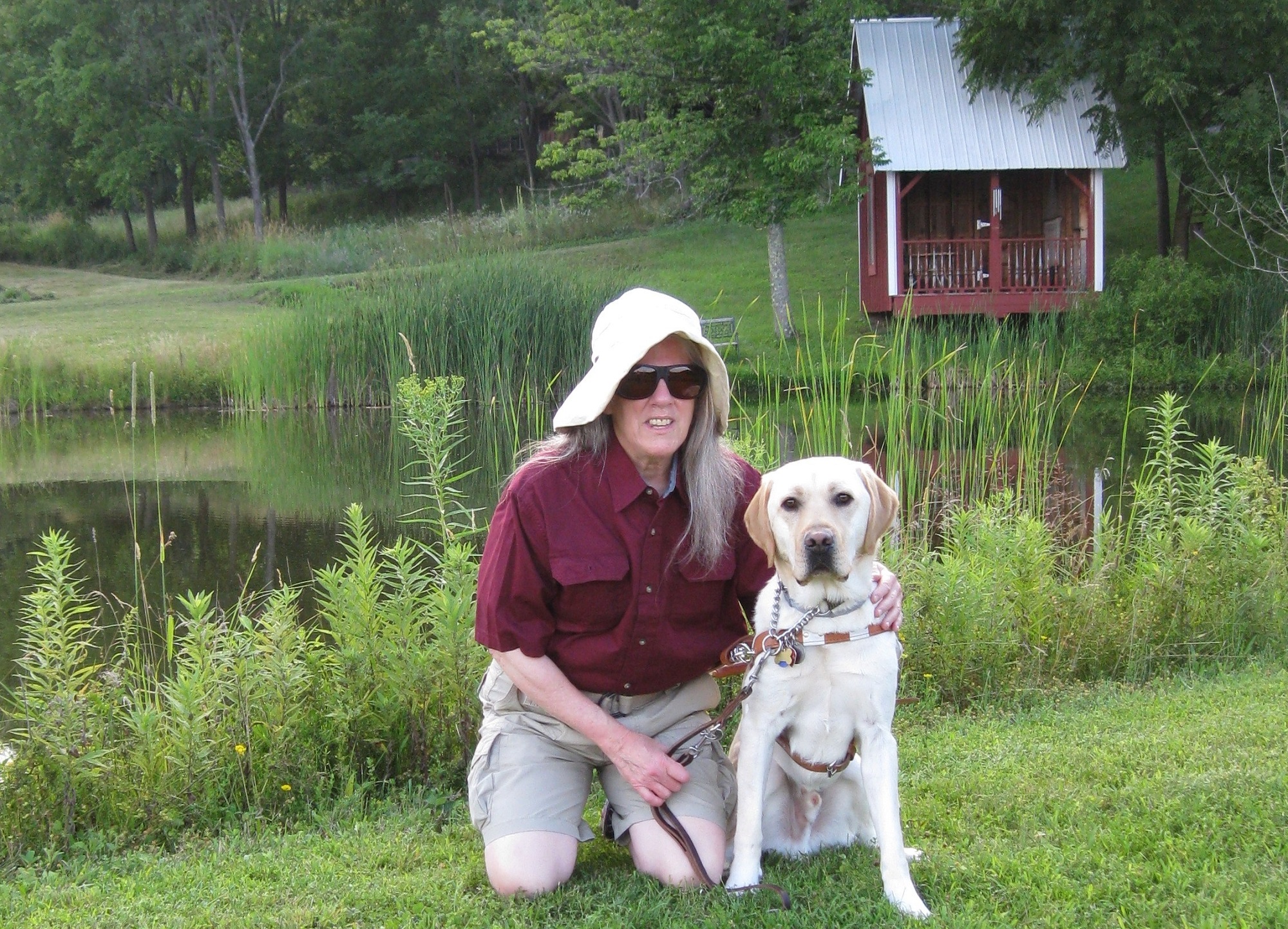 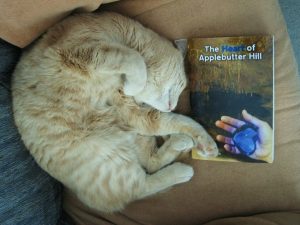 Donna and Mo (top) enjoy some quiet moments by the pond in Susquehanna County. Above, Goofus, the tabby who “found” the Hills, snuggles up to a copy of “The Heart of Applebutter Hill.”

Living in the Endless Mountains has brought peace to author Donna Hill, promoting her recovery from two bouts of breast cancer, and affording her a hiatus in her writing career. She has started two new books recently but not before one of her earlier works grew some new legs of its own.

In the spring, she submitted a non-fiction memoir article titled “Butterflies and Me” for inclusion in a book proposed by Plaisted Publishing of New Zealand. The peculiarity of an author from Auburn Township, Susquehanna County, Pennsylvania popping up in a book half way around the world is not so unusual to Donna, whose life has been anything but ordinary.

Donna was born legally blind, initially diagnosed with Retinitus Pigmentosa. In her early years, she could see light and distinguish shadows, but the progression of her vision impairment eventually took that little bit of sight from her as well.

“Nobody told me what was wrong with me,” Donna recalls. “When I was 16, I asked when I was going to go blind. My father told me that I already was, in the legal sense.”

She looked for answers through the Library of Congress but found that very little had been written of her condition. Through an association with the Foundation Fighting Blindness, she learned that the initial diagnosis had been a bit premature and simplistic for something that was not yet understood.

“They weren’t dealing with one disease,” Hill noted. “They were fighting with 16 different diseases.”

Just as the young Donna Weiss did not dwell on her impairment, she did not let it prevent her from being the first legally blind student mainstreamed in the Easton Area School District, garner an English Lit degree from East Stroudsburg University, and work as a welfare caseworker for the state. Hill also took on the arts with a passion that eludes most of us.

Moving to Philadelphia, she found audiences on subway platforms as a street performer; interviewed politicians, human rights activists and fellow artists for the Radio Information Center for the Blind; and launched a music career. In the course of that time, she also met and married Rich Hill. The two of them remained in southeastern Pennsylvania through 1997.

The progression of computers and the digitization of written materials opened a new world for Donna and steered her artistic mind in a new direction. Initially, getting her first computer allowed her access to remote places that she wouldn’t have been able to reach without difficulty, which would eventually include publishers. Screen readers and text-to-speech programs led to a two-way street.

“It allowed me to interact with the computer,” Donna related. With information now being digital, she added, “It’s so easy to change things. You don’t have to crumple up the paper any more and throw it in the waste basket. And it’s easier to stick ideas away for later use.” As much as Donna enjoyed having access to material formerly available only in print or braille, she could now also express herself through writing.

“Butterflies and Me” was one of the pieces she composed to reflect on her battles with cancer. She is certain that moving to the mountains and establishing a home on the 17-acre plot that Rich had owned since the 1970s had a lot to do with her survival and a renaissance of her talents.

“We would occasionally come up here to enjoy the country, and we thought we’d like to retire here some day,” she recalls. “The cleanness of the air has been really important to me. Compared to Philly, it is a much healthier environment. I see it in my guide dogs in that their coats stay clean so much longer.”

Donna finds comfort among the trees, a pond, her husband, a new guide dog and a cat that happened upon their property and adopted them. But the relative seclusion does not isolate her from things happening in the country and across the globe that are not as serene.

In 2014, Donna found herself in the roll of consultant on a class action lawsuit. An online publishing company with which she had started doing business laid claim to having 40 millions books available to persons with vision impairment while really only having archived about 80,000. The terms of agreement to which she had committed with the electronic book aggregator prevented Donna from being an actual litigant.

The case was picked up by the National Federation of the Blind. The biggest obstacles were that the case had to be fought where the publisher was headquartered and there had been no such landmark case there to establish an ADA (American Disabilities Act) precedent. Donna described the legal wranglings as mired in a separate but not equal form of legislation. The Federation did eventually win the case, she related, but Donna is unaware what damages were brought against the company or if there were ever any changes in their operations. “I’m sure not paying for a subscription to find out,” she laughed.

Injustice comes in many forms, Donna noted, and one that concerns her greatly is a movement toward a form of social censorship. As much as she is horrified and saddened by mass shootings that target people of various faiths and ethnicity, Donna feels that the extremism is indicative a greater threat.

She considers the attacks on black Christian parishioners in the southern U.S. and Muslims in Christchurch, New Zealand as disturbing on many levels.

“As far as I can interpret the constitution, the freedom of belief and the freedom of speech are part of democracy,” she stated. “We don’t understand how important that is. Whether that is a synagogue, a church, a Buddhist temple, or a bunch of atheists having donuts somewhere, if they are targeted for their beliefs, that has to be wrong. Once you start saying that this group or that is not susceptible to protection, you are opening yourself up to not having protection for anybody.”

In the wake of such tragedies comes a need for healing, which is how Donna’s writing found its way to New Zealand. Her promotional assistant told her about Plaisted Publishing’s “Haven” project, the proceeds of which were earmarked for charities working in Muslim communities in the aftermath of the killing of 51 people there, and suggested that Donna submit a piece. 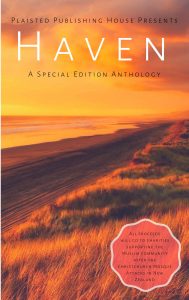 She was too busy to write something new, so she sent “Butterflies and Me.” She was pleasantly surprised to learn that it would be included and even more so at how quickly the publisher turned out the book. The project still being so fresh, Donna has not yet been apprised of its impact, but she hopes to have made a difference.

In the meantime, Donna is focusing on organization and bringing herself up to speed on internet accessibility issues and dealing with new websites that might provide new opportunities. She is working on a sequel to her 2013 mystery novel “The Heart of Applebutter Hill.” She has also started another book that she calls a “crime history.”

Her semi-retirement and adopted rural lifestyle gives her a freedom from the constraints of publishers that burden some writers. Donna will not be held to a deadline on either project, stating with a grin, “It took me long enough to finish the last one.” 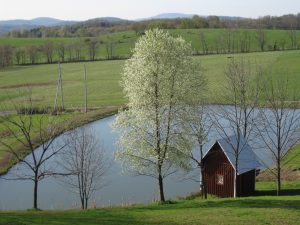 The serenity that inspires Donna Hill includes this pond on her Auburn Township property.