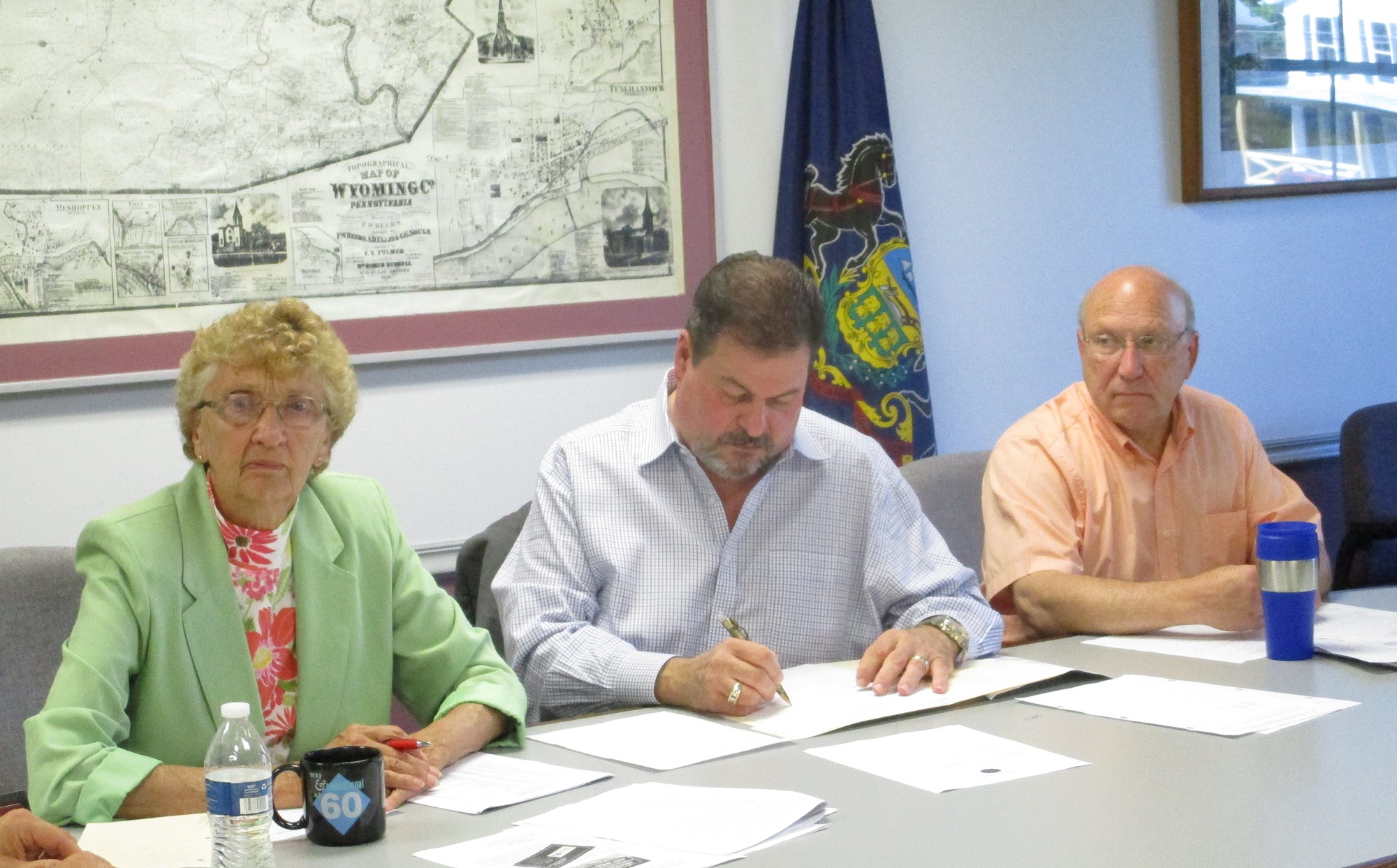 Wyoming County Commissioners (from left) Judy Mead, Tom Henry, and Mike Stabinsky were engaged with the public on a wide variety of topics in Tuesday’s meeting, including poor internet service, the closure of the Roadside Rest Park, and an initiative to spruce up facades of buildings along Route 6.

Cain Chamberlin, executive director of the Endless Mountains Heritage Region (EMHR), visited the Wyoming County Commissioners on Aug. 20 to ask for a letter of support for a grant program that provides funds for improvements to commercial properties along the Route 6 corridor. The EMHR is partnering with the PA Route 6 Alliance, another designated PA Heritage organization that initiated the project.

Award amounts can be as high as $5,000 with a 50 percent match by the business/property owner for a project total of $10,000. The Façade Program is made possible through a Keystone Communities grant from the PA Dept. of Community and Economic Development (DCED) and project support funding from the PA Dept. of Conservation and Natural Resources.

Chamberlin noted that the EMHR is primarily focused on Wyalusing in Bradford County and Tunkhannock in Wyoming County based in part on previous endeavors supported by the EMHR in those two towns. Nonetheless, Chamberlin believes that all communities along the Route 6 corridor are eligible, and municipal leaders should be receiving information soon from the Route 6 Alliance.

Eligible projects would include plans for adaptive reuse of existing structures, including vacant buildings, and bringing substandard buildings up to code to enhance commercial development.

Maintaining a building’s historical appearance in the course of a physical upgrade, Chamberlin noted, fosters community spirit and civic pride.

The PA Route 6 Alliance successfully launched the program in 2017 the PA Wilds, a designated heritage region in the north-central part of the state. Chamberlin is in the process now of garnering interest on behalf of the EMHR, after which a public meeting will be held in each county to discuss the initiative.

Commissioner Tom Henry informed Chamberlin that the board fully supports the project and had already drafted a letter of approval for the DCED. Commissioner Judy Mead, who serves as Wyoming County’s representative to both the EMHR and the Endless Mountains Visitors Bureau noted that the Façade Program will work nicely with the EMVB’s endeavor to secure grants for more consistent signage in the region.

The sudden closure of a popular park along Route 29 in Eaton Township prompted a social media firestorm that spilled over into the commissioners meeting on Tuesday. Roadside Rest, a public green space situated along Bowmans Creek that is popular with anglers and picnickers and once frequented by swimmers, was initially shut down by Eaton Township officials after visitors and neighbors complained of abundant trash throughout the park.

According to commissioner Mike Stabinsky, the land is owned by the county and leased by the state through PennDOT. It was PennDOT’s decision to keep the park closed on weekends until a long term decision can be reached.

“Nobody wants to patrol it,” Henry related. “I’ve gotten complaints from everyone who lives around there.”

Audience member Lori Faux, who lives just a mile west of the park, suggested that visitors from out-of-state are ruining it for the local people who have generally treated it with respect. Trash left behind has included dirty diapers and hypodermic needles.

“Everybody wants it open,” Henry remarked. “I think they’ll have it figured out within the next few weeks. We’re not going to let that go.”

According to a televised report, PennDOT will have the park open for Labor Day Weekend.

Eaton Township resident Joe Sick attended the meeting to speak to the commissioners on three topics: poor cellphone service, an experience he’d had with a communications center employee that he felt could have been handled differently, and an inquiry as to whether a county building might be sold to a developer.

He got an earful from others in the room on his first concern, telling him that Verizon was not the only carrier in the county no longer delivering the service they used to. Sick said that his family had dropped their landline on Thurston Hollow Road when they had better service and now can barely get a text message sent. Commissioner Mead related that many people at Lake Carey switched to Verizon some years ago, only to have service there drop off dramatically.

Faux noted that the same has happened to many Sprint customers, but a tower in the Forkston area that was hit by lightening might be to blame.

Sick asked if the commissioners would make a call to Verizon on behalf of Wyoming County residents, and Henry said that he would.

Secondly, Sick wanted to know if the Robinson Building in Eaton Township, in which Children & Youth Services and some other county agencies are situated, was going to be sold the company that intends to build an Aldi’s store nearby. Henry replied with certainty that such was not the case, noting that the company has shown no interest in the structure

Lastly, Sick wanted the commissioners to know that, upon returning from a potential structure fire that he could not find and subsequently dealing with a tree across Route 92, he called the Wyoming County Emergency Management Center to get some details that he needed for his log book. According to Sick, the dispatcher told him to “look it up” even though he was certain that the information should have been more easily accessible to the dispatcher. Henry said he would look into the situation if Sick could provide him with the exact date and time.

Mehoopany Ambulance Company president Tina Henning attended the meeting to inform the commissioners of a special event at the Wyoming County Fair and invite them to attend. On Saturday, Aug. 31 at 7:30 pm at the Veterans Pavilion, at least 18 local residents who have dedicated 50 years or more to fire and ambulance companies in the county will be honored.

“I understand the contribution they have given to their communities and felt it was important to recognize that,” Henning later remarked. She added that she also hopes that the ceremony will stress the value of volunteers and encourage others.

Henry said that he could be there and asked if it would be OK to make a presentation on behalf of the commissioners, which Henning welcomed.

(The commissioners were also given a report by public defender Timothy Michaels suggesting that a sluggish court system in Wyoming County is to blame for jail overcrowding and the inability of many to stay out of the prison system and make better lives for themselves. Read about it here as a separate story: http://www.endlessmtnlifestyles.com/?p=14357)

2019-08-21
Previous Post: Prison Population Down, and It Could Be Lower – Work Release Addressed
Next Post: Hiduk Initiates Write-In Campaign for Commissioner