Hard to be Pickin’ on Awesome Bluegrass Festival

By: Rick Hiduk
In: bluegrass music
With: 0 Comments 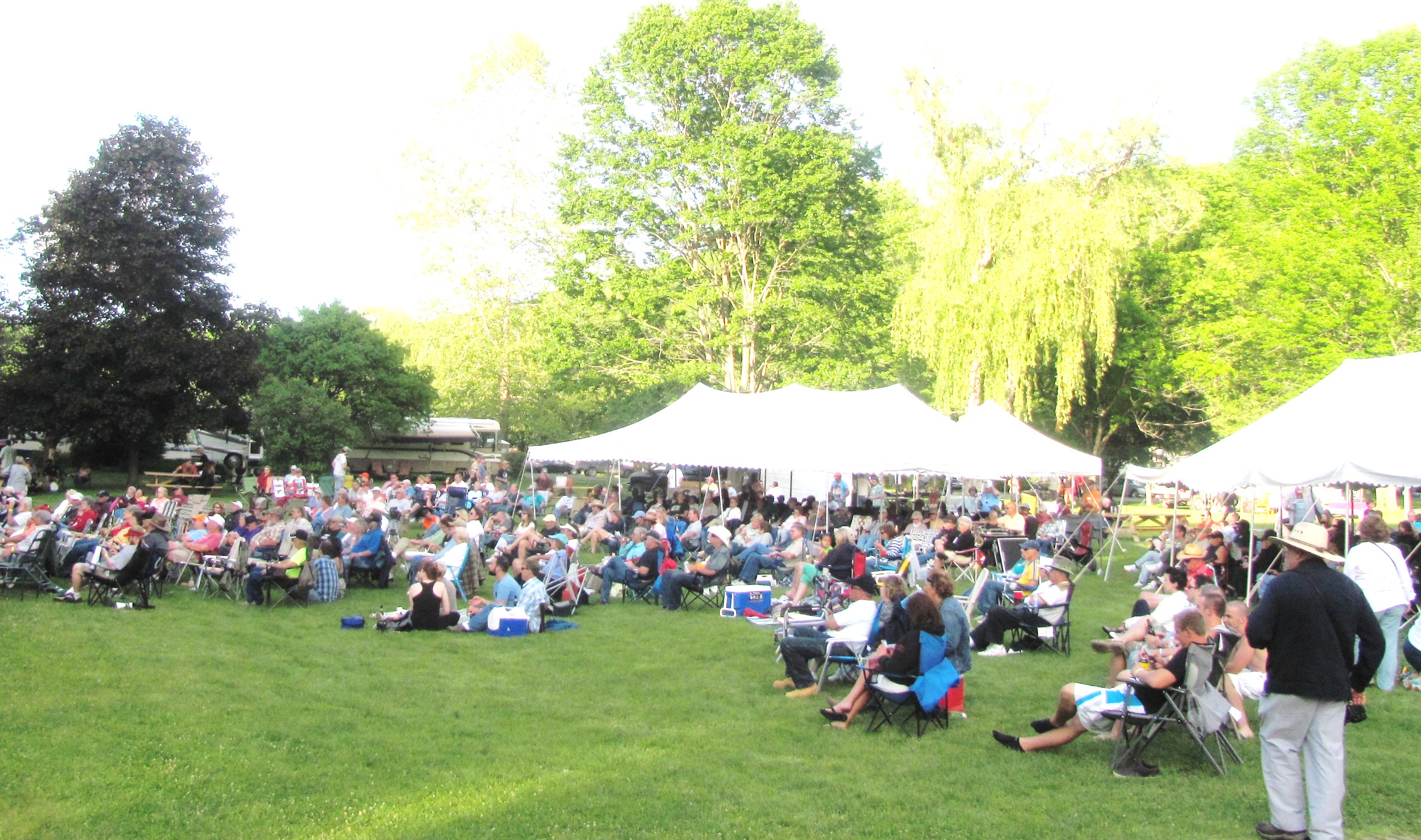 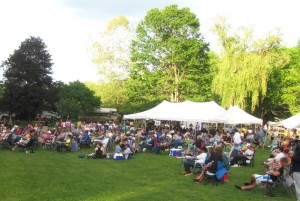 Crowds gather in the twilight of a Friday evening for a performance by the BoxCars at NEPA Bluegrass, a three-day festival held at Lazybrook Park in Tunkhannock Township, Wyoming County last weekend.

We are so fortunate to have a world-class bluegrass festival in our back yard. The caliber of music I heard over the three days and nights of NEPA Bluegrass and the fervor with which people of all ages responded to it was incredible. The grounds are impeccable, and the artists and music fans alike commented on the panorama of greenery and blue skies that surrounds you when you are there.

What follows is my personal adventure at Lazybrook Park this past weekend. Due to the sheer magnitude of the event and the clever way that it is spread out over many blocks of a former Tunkhannock Township neighborhood, I am sure that your experience varied. I expect (and hope) to have a different experience every time I return.

We came so close this year to achieving the full experience of NEPA Bluegrass by camping for the weekend. An inspection of the old pop-up the previous weekend revealed that mice had moved in during the long winter and turned it into a rodent condo. A sinus cold sneaked up on me and derailed any chances of sleeping in a tent, so we became daily guests on a weekend pass – still a great deal.

Arriving Friday evening at about 6:40, we swung by the Traditional Stage to hear a few strains of Circa Blues performance, but they were done, so we made a B-line to the Progressive Stage to see Sassafras, which features one of our favorite musician friends, Jessica Illuzzi, who also plays with Retro Rocket. It was the first time I had heard just the girls play, and I can’t think of a more perfect sound to start off my night. 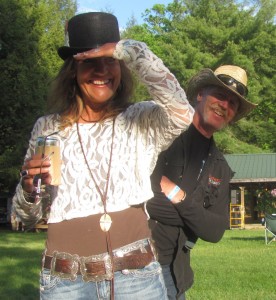 Jess’s family members, like Nancy and Charlie Verbryck (above), are among her biggest fans, and it’s always good to see them out.

Jess told me that the group had a guest fourth member that night whom I never really got to meet. But she played a variety of non-traditional instruments, including a clarinet, that gave the all-female ensemble a distinct party-like flare. 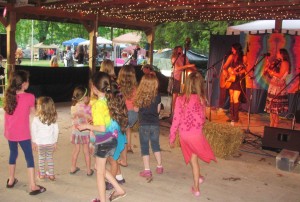 A number of families brought their children to the show. Led by adults, at least a dozen mostly preteen girls (above) took to the new dance floor and proved that children do not need to be told what good music is. They especially took a liking to Sassafras’s rendition of Camptown Races after noting the classic folk song’s local association.

The BoxCars were the headline act at this year’s festival, and the organizers made sure that you don’t miss them but closing down the Progressive Stage for an hour and a half to encourage you to head to the Traditional Stage to have a bite to eat before the big show.

And big it was. Folding chairs took up most of the field and tent space, and the Grammy winning bluegrass stars had the crowd hootin’ and hollerin’ as a drone camera floated above taking photos.

Though cool air was creeping out of Tunkhannock Creek and across the grounds, the night was otherwise so calm and the atmosphere so comfortable that it was pretty easy to let yourself drift into dream with the strains of bluegrass music and applause of an appreciative crowd floating through the air. Ahhhhhh…..

Darn’it! No camper, no falling asleep. We rolled up the blanket and bid our friends farewell for the night as they headed back to the Progressive Stage to see Mason Porter and Dry Mill Road. We headed back to the house to rest up for short work shifts on Saturday before returning to the festival at supper time.

It was my first exposure to the Roys (above), a five-piece outfit with a pretty blond guitarist/shared-lead vocalist who was simply hypnotic. I was blessed to see the Roys again on Sunday when they were gushing over the scenery that they had to enjoy while they were playing for us. No doubt about it, there was a familiarity and comfort level on Sunday that I did not hear the first night that was pretty cool. 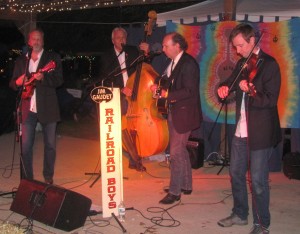 After The Roys, we headed back to the Progressive Stage for a triple-header that featured Jim Guadet and the Railroad Boys, (above) The Coaltown Rounders, and the Hillbilly Gypsies. I’ve never had a finer night in Wyoming County. That party was the closest to heaven I’ve ever been in terms of ground-swelling excitement. 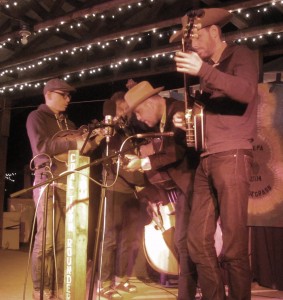 The CoalTown Rounders (above), whom I’ve heard on numerous occasions, were in perfect form and did one of the best renditions yet that I’d heard of Drivin’ Nails in My Coffin.

All three acts were incredible, but the average age of the crowd dipped nearly to 30 at one point, which blew my mind. Teens and 20-somethings whom i”d seen in groups earlier and thought they might have been dragged there by their parents took over the dance floor.

Once again, they were instinctively moved by something that those of us over 40 sometimes forget. 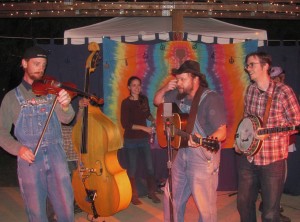 The Hillbilly Gypsies (above) were mesmerizing in the way that they mix theatrics with their high-energy, trad-folk repertoire and had the crowd begging for more.

Authentic from-the-soul music moved people at the Progressive Stage all night long. The dance floor swelled and eventually reached well into the field toward the pretzel and taco wagons and way back under the pine trees along the creek. I saw people rise from their blankest and chairs, stretch and weave, then break all out into dancing. It was magical. 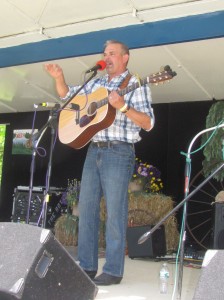 I returned on Sunday and greeted Christa Stewart at the gate one more time. My purposes were to get some bright midday photos and one more scoop of cinnamon ice cream, and I was treated to another performance by the Roys, who were preceded by Mark Miklos (above). Miklos is a solo country/folk singer who drew the largest response from the crowd with a song about his father, titled Pocono Joe.

I was talking to a former Tunkhannock schoolmate, who pointed me toward a girl from Towanda who made organic soaps from goats milk whom I’d not previously met, when I managed to grab co-organizer Danny Stewart for a few minutes. I apologized for not having camped as planned but promised to do so next year.

“That’s the only way to go,” Stewart assured me. “To have your own apartment to slip away to and take a nap when you need to is priceless.”

The fact is that the welcome wagon that greets you at NEPA Bluegrass is already saying “ya’ll come back now, y’hea’” as you arrive. You don’t want to leave, and you can’t wait to get back. 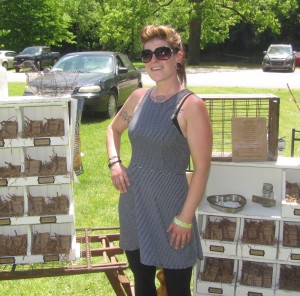 There was a large variety of vendors at NEPA Bluegrass, including Jenelle Mitros of Towanda, who sold hand-made thereputic soaps with a goat-milk base. 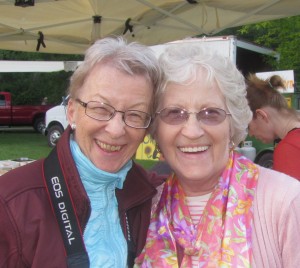 Among the happy shoppers at the bluegrass festival were Gail James Left) of Meshoppen Township and Mary Eberlin of Laceyville.