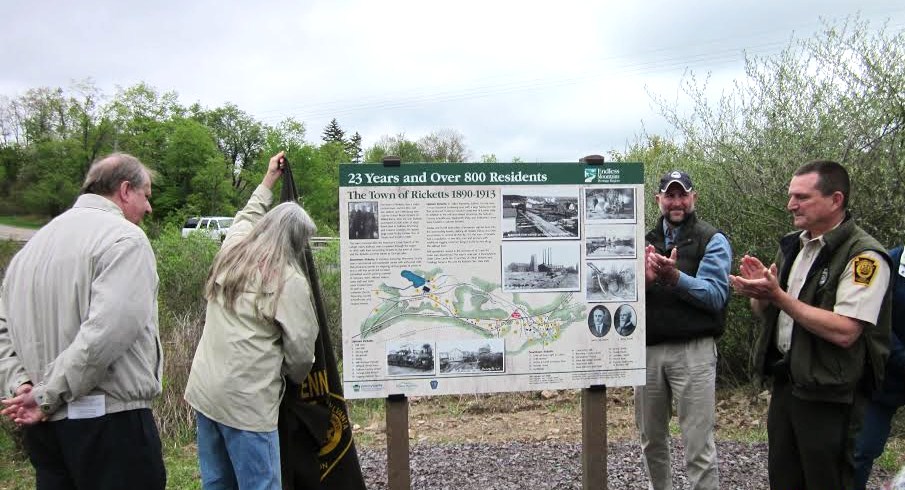 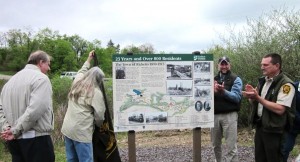 Sullivan County Historical Society President Melanie Norton (second from left) unveils a new interpretive sign at Ricketts on the border of Sullivan and Wyoming Counties on May 24 in the company of (from left) author and historian Charles Petrillo, Endless Mountains Heritage Region Executive Director Phil Swank, and Bill Williams of the Pennsylvania Game Commission.

The overwhelming response to the unveiling of a historical panel and map depicting the history of the ghost town of Ricketts has those who collaborated on the project excited about the possibilities for similar projects in the near future. More than 100 people attended the event and participated in a walking tour of a landscape that once supported 800 residents and supplied Pennsylvania with much-needed products of the time.

Ricketts was figuratively split by the Sullivan and Wyoming County line and is now the location of state game lands that flank Route 467. Cut timber, ice, and packing materials were manufactured there and taken by the Lehigh Valley Railroad Company to Wilkes-Barre and beyond.

What’s next after Ricketts? Perhaps the coal town of Laquin on Barclay Mountain in Bradford County or Celestia, the site of an apocalyptic enclave of millennialists in Sullivan County.

“It was the only piece of land ever deeded in the name of God,” Endless Mountains Heritage Region (EMHR) Executive Director Phil Swank said of the latter, adding that the Sullivan County Historical Society (SCHS) owns the land, and former SCHS board member and retired college history professor Wilson Ferguson has already done extensive research about Celestia in preparation for such a designation.

“There is nothing there at the moment,” related Melanie Norton, SCHS Director and EMHR board member. “If we could get a sign like that there, it would be more advantageous to the public to know what they are looking at.”

Barclay Mountain, near Leroy in western Bradford County, was mined for coal in the early to mid 1800s, and Laquin was one of its most prominent towns. Swank credited Bradford County Historical Society Currator Matt Carl for compiling the background history and photos that could potentially be used for a sign there.

The sign at Ricketts includes maps, photos and naratives, a combination that Norton feels is vital to putting visitors in touch with a site when little physical evidence exists. Without such interpretive aids, she suggested, “Your imagination can’t quite carry you far enough to envision what did exist.”

The Ricketts project was a collaboration of various entities, including SCHS and EMHR. Swank and Norton give most of the credit for the project to state game Sullivan County District Officer Bill Williams, whose curiosity was piqued by tales about a formidable logging town that once straddled the borders of what is currently State Game Lands 13 and 57. He made contact with Norton and visited the SCHS museum in Laporte, where he found a volume of photo postcards produced by Ranald Douglas and a book written by J. Charles Petrillo.

“People were telling me that there was a ghost town there, but I really didn’t know much about it,” said Williams, who in turn sought out Petrillo, who had many more of Douglas’s photos in his own collection.

“His interest continued to grow from there,” said Norton, who noted that the game commission continued the authorization of Williams’ personal research and efforts to integrate the unique historical element into state game lands primarily used by hunters and trappers.

The new signage will provide for them “a better understanding of what was there where they are hunting,” said Williams, who has taken stewardship of the game lands to a new level with the project. “It benefits everybody,” he stated.

When Williams began to look at options for signage, Norton steered him toward EMHR and Swank. The organization was able to secure a grant to cover the design and construction costs of an interpretive panel that goes well beyond the standard historical marker.

Swank sought the talents of graphic artist Diane Turrell of Tunkhannock, who worked closely with Williams, Petrillo, and Norton. Turrell’s husband, Chris, it turned out, was a direct descendant of J. Henry Turrrell who owned half of Trexler & Turrell, the company that owned most of Ricketts a hundred years ago.

“It one of the most unique collaborations I have ever dealt with,” Swank remarked. “It was the perfect storm.”

The stars certainly alligned themselves for the Ricketts project, and the successful dedication of the sign in front of more than 100 spectators on May 24 could serve as the catalyst for the acknowledgement of other storied ghost towns in the region as well as shrinking towns that once held greater prominence in the area’s economy and cultural landcsape.

“What excites me the most is that there is no reason why we can’t continue this sort of thing,” Swank said of future collaborations. “If it’s a compelling story and there is sufficient content, we can work with many other groups to make things like this happen.” Having a template for the look and content for the panels will also make it easier to incorporate future projects, he added.

“If you can just get used to collaborating with other agencies, the end result will be more beneficial to the public,” Norton concurred. She would like to see the initiative grow to include all four counties in the Endless Mountains region at a rate of one or two signs per year.

“These are sort of the low-hanging fruit,” Swank said of Celestia and Lakeland. “What else is out there if we scratch beneath the surface?”

“It all ties in with tourism promotion. Norton said of designating historic areas in remote areas with interpretive signage. “It becomes more family-oriented. Let’s get them out of cabins and campsites and give families more access and more things to see in our area.” 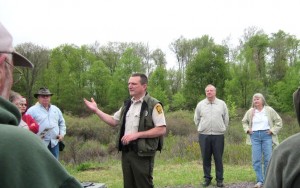 State Game Commission Sullivan County District Officer Bill Williams speaks to the crowd gathered at the ghost town of Ricketts on May 24. Williams led a guided tour of the area after the unveiling of an interpretive panel and comments from Sullivan County Historical Society Director Melanie Norton (back, right) and (second from right) author and historian Charles Petrillo.