By: Rick Hiduk
In: Noxen
With: 0 Comments 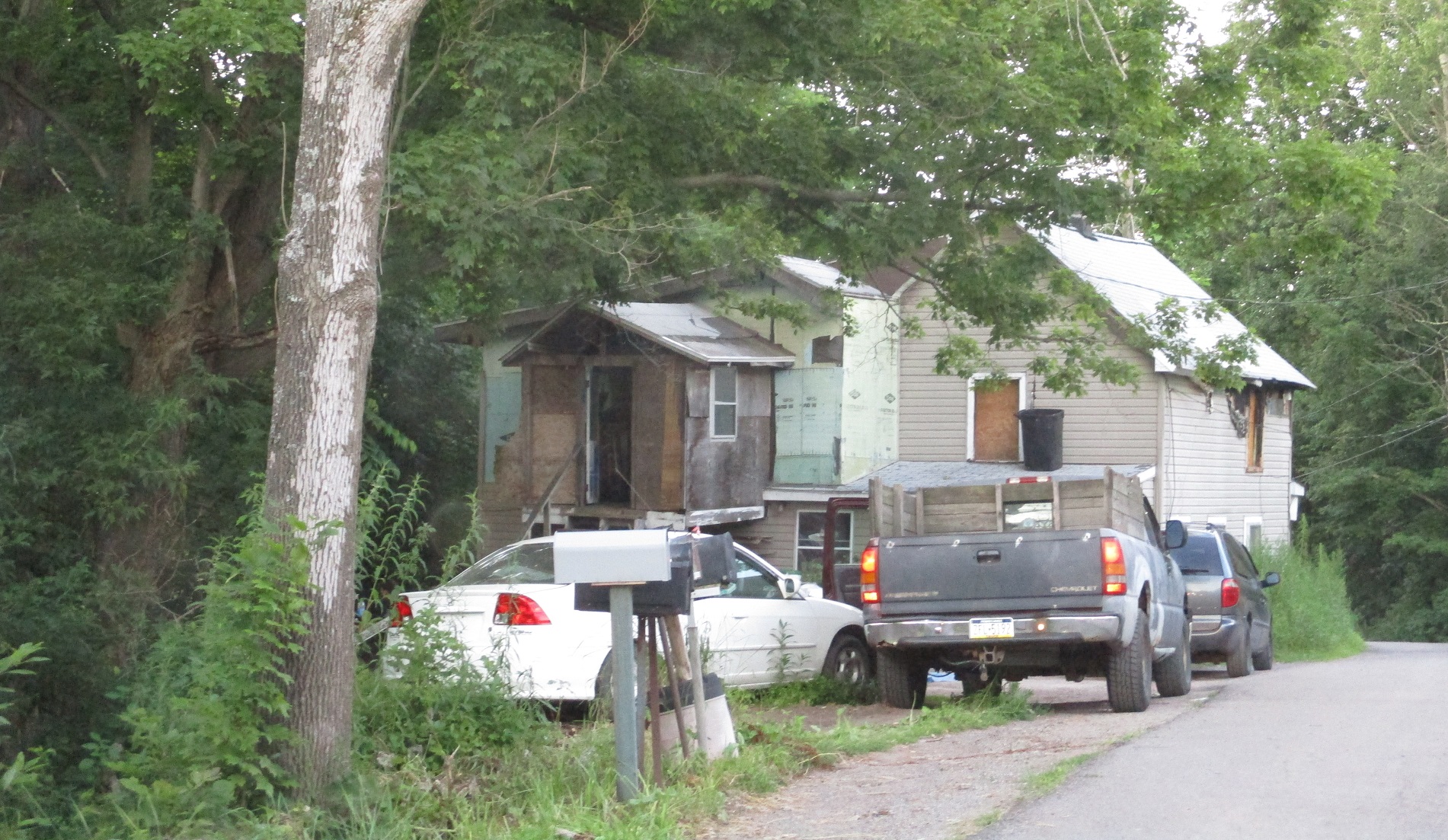 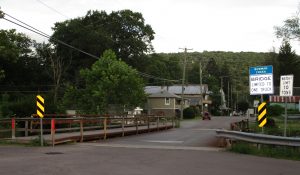 Of great concern to the Noxen Township supervisors is a burned-out house on Beaver Street (top) and several mobile homes deemed unfit for habitation in which people are residing. Board members are also unhappy with plans by PennDOT to replace the old open-grate, open-sided bridge on Main Street (above) with a solid concrete structure, but recent activity near the span over Bowmans Creek indicate that the installation of a temporary bridge will happen soon.

Alarmed by the number of people living in buildings and trailers that have been deemed uninhabitable by the county, the Noxen Township supervisors approved a draft resolution on Monday evening that they hope will give them more control over such situations. The document will be reviewed by solicitor Paul Litwin III and publicly advertised upon his approval.

In addition to the mobile homes, the board has received phone calls about “numerous individuals and animals” that had moved back into a structure on Beaver Street that had been boarded up after being badly damaged by a fire. “It’s a building that is unsafe,” said supervisor Cathie Pauley. Electricity to the house has been cut off, but the current inhabitants are using generators for power.

Township resident Jackie Kliamovich asked if Noxen fire chief Lew Hackling might be able to assist the township, since he issues occupancy permits through the fire company. Board members agreed that Hackling should be contacted, as well as the township’s agent at Building Inspection Underwriters (BIU).

In addition to keeping people out of harm’s way by preventing them from living in dilapidated buildings, Pauley noted that, some years ago, a similar situation resulted in an expense to the township that the board would prefer to avoid with the new ordinance.

Another aspect about the trailers that concerns the board is that the township can no longer collect taxes from the inhabitants because the structures were removed from the tax rolls when they were deemed uninhabitable by the county. Taxes are also not being collected on the property because it is still under probate since the death of the last owner.

Secretary/treasurer Wendy Hettes informed the supervisors that a $248,000 CD held by the township had matured again and asked if she should “roll it over” for another year. Kliamovich asked if Hettes (below) had considered splitting the bond, putting about $100,000 into a one-year fund and the remainder into a three-year fund to increase the interest potential. 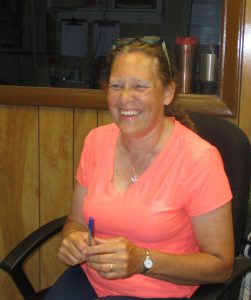 Hettes replied that she had not considered that but would be happy to look into the possibilities and report her findings to the board at the August 5 meeting. Supervisor Carl Shook said that he liked the idea of keeping at least $100,000 handy in the event that the township should endure another “100-year” flooding event.

It was decided that supervisor David Hettesheimer would temporarily assume the duties of former township roadmaster Gary Patton, who died as a result of a farming accident on July 6. Prior to his death, Patton completed a round of routine road and equipment maintenance, including the installation of a new drainage pipe under Maple Street, according to the agenda.

One of Hettesheimer’s tasks will be to conduct a full inventory of equipment. As is common in rural communities, privately owned geared is used alongside that which is owned by the municipality and often stored together as a matter of convenience.

Pauley noted that the township’s weedeater was no longer functioning. Resident Joel Fields asked what kind of fuel was being used and suggested that non-ethanol fuel is much kinder to both power tools and farm equipment. He switched to non-ethanol fuel at his business several years ago and has not had to change out parts nearly as often. It was determined that Bear Fuel on Route 118 might be the best source for purchasing non-ethanol fuel in bulk.

Under the subject of communication, Hettes reported that PennDOT had submitted a new five-year contract to the township for maintenance of Stuhl Road. Shook was quick to gather the printed information from her and say, “I’m not signing it until they do a little work up there. There are things that need to be done”

Under “old business,” Shook related that he was about ready to give up on the construction of a new maintenance building because the plans have gotten too big. “All I want is four walls, a roof, and two doors,” he stated, in reference to bids that include heated floors and other elements deemed unnecessary. Primarily, the township was looking for a simple structure to store calcium for roads and a few more pieces of equipment. Kliamovich suggested that the board look at a new three-sided structure in Eaton Township and contact the company that built it for ideas.

Pauley expressed disappointment at the amount of cleanup left to the township after the most recent fireworks display, noting that a lot of wires were left behind that had to be removed from the grass before mowing. A group of prisoners from the Wyoming County Correctional Facility performed some of the cleanup duties after the recent Rattlesnake Roundup but missed the township property. Those in attendance chalked it up to a general lack of communication and committed to more fully addressing cleanup prior to next year’s event.

Board members had received copies of the Wyoming County Hazard Mitigation Plan via email, but none had read through the document. County officials have suggested that it is in the best interest of all municipal officials to sign on to the document, which should facilitate filing for relief in the event of localized or countywide disaster.

“You might want to read it to see if it commits us to anything,” said Fields, who asked if Hettes could email him a copy to review.

Resident Doug Brody suggested that the township look into renting a vacuum tanker truck to backwash drainage pipes under local roads in recent years prior to the next heavy rain event. He said that many of them are already half full of gravel.

A few citizens have approached the township for permission to acquire and hang personalized veterans flags similar to the Hometown Heroes that hang in other communities. Board members expressed a willingness to help hang the banners but noted that the township owns none of the utility poles in the village of Noxen.

The recent community cleanup cost Noxen Township $2,175, which included about $800 to clean up a mess dumped illegally on Wilson Road.

It appears that the replacement of the bridge on Main Street over Bowmans Creek is imminent. Pauley noted that she has expressed her dissatisfaction to PennDOT many times for plans to remove the open-grate, open-sided bridge and install a box-culvert bridge. Though the old bridge has taken a beating during several recent floods, Pauley maintained, water is able to pass through it. “I keep telling them, ‘We don’t live in a city. We live in the country.’ This new bridge will kill us,” she stated.

On a final note, a resident asked if the board had any plans to do something for the Patton family in the wake of the roadmaster’s passing. Shook said that he had been in contact with Patton’s family and is waiting for them to identify a specific need or desire that could help them figure out best how to honor him.

The Noxen Township supervisors generally meet on the first Tuesday of each month and will meet again on Aug. 6. The most recent meeting was held on July 15 due to a lack of a quorum on July 1. 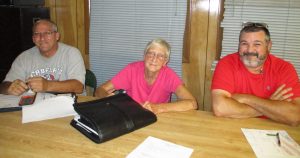