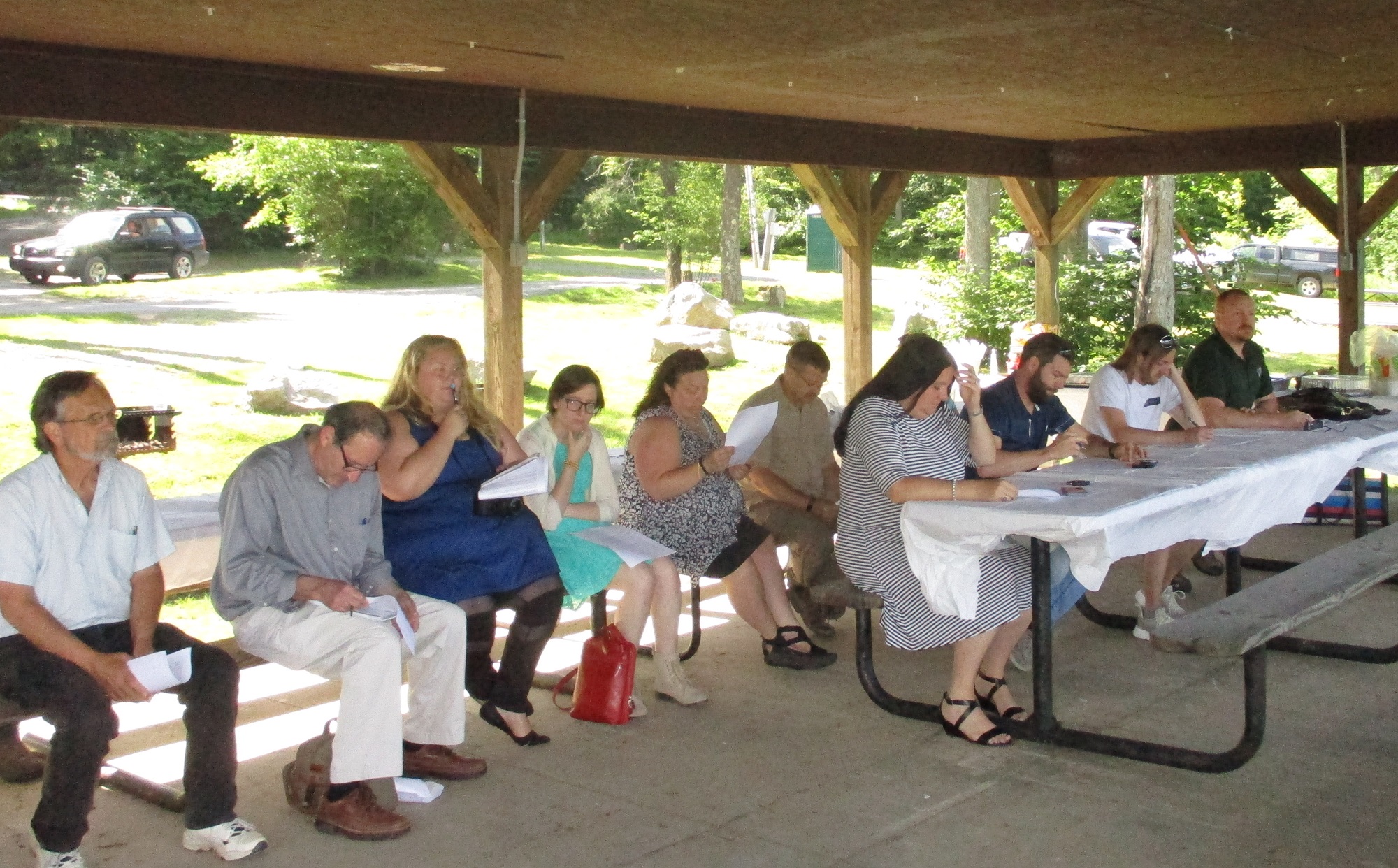 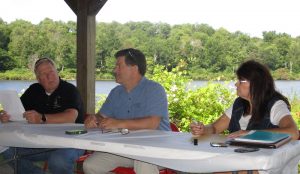 The audience for the June 27 meeting of the Bradford County Commissioners was an average size, but the location and weather offered by the setting at Sunfish Pond County Park was hard to beat. The commissioners, represented on Thursday by Doug McLinko (above left) and Ed Bustin (center) and chief clerk Michelle Shedden, held the meeting there to draw additional attention to the upcoming Summer Parks Series. The joint effort with the Bradford County Visitors & Tourism Agency and the Endless Mountains Heritage Region will kick of at Sunfish Pond on Saturday, July 6. (read more about it here: http://www.endlessmtnlifestyles.com/?p=13812)

Bradford County commissioner Doug McLinko noted at the beginning of Thursday’s public meeting that the agenda was light. Despite that and the serenity of Sunfish Pond in Leroy Township, where individuals from around the county met up with the board, two lofty topics were brought to the table that are also of interest to those in adjacent rural counties. 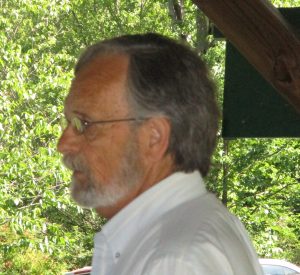 Sheshequin Township supervisor Kurt Lafy (above) was there to make sure the commissioners were aware of plans by Gov. Tom Wolf to levy an eight dollar per resident fee on municipalities that depend on the Pennsylvania State Police (PSP) for coverage. Many rural communities have been forced to disband their police forces due to a lack of funds to pay for full- or even part-time officers.

Wolf argues that the money is needed to help defray the costs of the PSP, but Lafy asserts that the burden is being distributed unfairly on rural Pennsylvanians. He insists that as a “political subdivision of the Commonwealth of Pennsylvania” a municipality should be exempt from taxation by the state. Wolf would rather silently mandate that municipalities collect the fees than to raise state income taxes, Lafy maintained, which would be political poison.

“While it is not coming out of paychecks directly, it still does,” said Lafy. “It will come out of the bank accounts of the municipality…and, sooner or later, local officials will have to raise local taxes to cover it.”

Lafy asked that the commissioners become proactive on the issue and noted that he will be devoting as much time as possible himself to contacting elected officials in neighboring counties to assemble a “unified voice.” He also called on residents to contact their state representatives and tell them to vote against the measure.

“If we remain silent, Harrisburg politicians will view this as apathy on our part,” Lafy remarked. “We will be sending them voiceless approval of their plans.”

Commissioner McLinko asked Lafy if the PSATS (the Pennsylvania State Association of Township Supervisors) had weighed in on the issue. Lafy replied that they have voiced opposition to it, but the boroughs that depend on PSP coverage also need to be heard.

“If you had a State Police representative here, I’m sure he would say that they are undermanned,” said McLinko, while agreeing that a growing number of state mandates have become disheartening.

“This is not a one-party issue,” he stated, citing as an example the obligation bestowed on every county to replace their voting machines with new units that will produce a paper receipt. Bradford County was in a better position, financially, to purchase new machines and put them in service a year ahead of schedule but some counties, McLinko noted, are still struggling to pay for them.

A conservative estimate suggests that 3.5 million of Pennsylvania’s 13,000,000 residents are considered rural. Lafy and the commissioners believe that actual number is much higher, noting that even rural townships in Lancaster County, which is considered part of a metropolitan area, are not included in the tally but have to rely on PSP for coverage.

Commissioner Ed Bustin suggested that CCAP (the County Commissioners Association of Pennsylvania) is against the fee, and he is unsure if the resolution will make much headway this year. Nonetheless, he is inclined to believe that there are communities across the state who would reject the measure.

If it costs too much to run the State Police, Bustin suggested, the state should look at ways to “change the model” or make any increases fair and equitable across the Commonwealth.

Lafy invited everybody who would like more information about the proposed legislation, as well as those who would like a template of a letter he has drafted to send to elected officials, contact him at KurtDLafy@yahoo.com. “Tell them you vote,” he stated. “They’ll get the message.”

Feds Appear to be ‘Fast-Tracking’ Natural Gas via Rails

Standing Stone resident Diane Ward came to the meeting equally prepared to speak about a measure that she suggests the federal government is attempting to slip through the legislative process without enough input from the people whom are most likely to be affected.

There are just 11 days left for public comment on a Pennsylvania Hazardous Materials Safety Agency (PHMSA) special permit request that will allow for the transportation of liquified natural gas (LNG) via standard cryogenic rail cars from the New Fortess Energy plant being constructed in Wyalusing Township. Up to 100 of these standard-length cars will be allowed on the tracks at one time for the transport of LNG from Bradford County, through Wyoming County, on its way to Philadelphia. 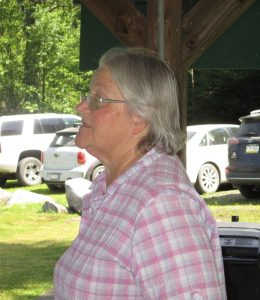 The transport cars that the permit would allow for are used for many hazardous materials, Ward (above) noted, and her concern is not as strong for their potential for rupture as it is for the length of the train – nearly one and a half miles at full capacity – through rural communities with inadequate safety measures at crossings. “That bears some scrutiny,” she remarked.

In Florida, by comparison, LNG is moved in smaller IM cars (aka ISO cars) that fit inside a frame. The cars can be easily moved from train to ocean freight liner and back to the rails with a higher safety factor. In Florida, more than 90 percent of railroad crossings have gates – mostly dual gates. In Pennsylvania, that number drops to less than 40 percent. With the number of private crossings with no more than stop signs or flashing lights in Bradford County alone, Ward suggested, the local percentage is likely much lower.

With freight traffic on local rail lines largely in decline in our lifetimes, she added, “We don’t have a culture that says that the rails are dangerous.” Looking further down the line, Ward expressed concerns about so much rail traffic going through the Vosburg Tunnel, noting that it, like other stretches of track, is flood prone.

“And, I think about poor Tunkhannock,” she added. “This train will take 15 minutes or more to pass through town several times per day.”

Ward and the commissioners agreed that even the state is lacking a solid energy policy that would address such issues. “We can’t be against everything,” McLinko remarked. “But there is a huge disconnect between the federal government and grass roots Pennsylvania.” A codified state energy plan, he concurred, “would encompass LNG.” McLinko and Bustin agreed that attempting to move the LNG on roadways is the most dangerous and that railroads are the second safest option after pipelines.

“That plant (New Fortress Energy LNG processing plant at Wyalusing) is going to use what we’ve already got, and that makes a lot of sense,” Bustin remarked. “But that’s an awful lot of stuff going through some very congested areas.”

“There is not a transportation system that is specifically designed to do this,” Ward continued, citing an executive order by President Trump that waives regulations on LNG transports as a gross oversight. “This should not be rushed.”

McLinko cited the hard work done locally a century ago by his ancestors and those of others in the audience, noting that ‘best practices’ were not always observed by the logging nor coal mining industries. “Sometimes, we need to take a breath and look back and see what has happened and take the time to make sure that what’s done is best for us when it comes to our natural resources,” he stated.

What makes the special permit request stand out, Ward explained, is that the details about the communities through which the trains will travel – and the potential hazards – are supposed to be specified in the final application. But that takes municipal and public input, “and nobody is doing that.” Secondly, she related, a freight operator is not a holder of this special permit is not bound by any regulations and, after 20 days, can send the LNG anywhere else. Ward recommends both fewer and smaller rail cars until all parties have had an opportunity to see how things work.

Bustin complimented Ward for her presentation and noted that he had also been researching the matter.

Details of the permit request, which is filed with the U.S. Department of Transportation, can be accessed online at https://www.phmsa.dot.gov/regulations-fr/notices/2019-11882. Public comments can be submitted via www.regulations.gov after typing PHMSA-2019-0100 in the open field on the main page.