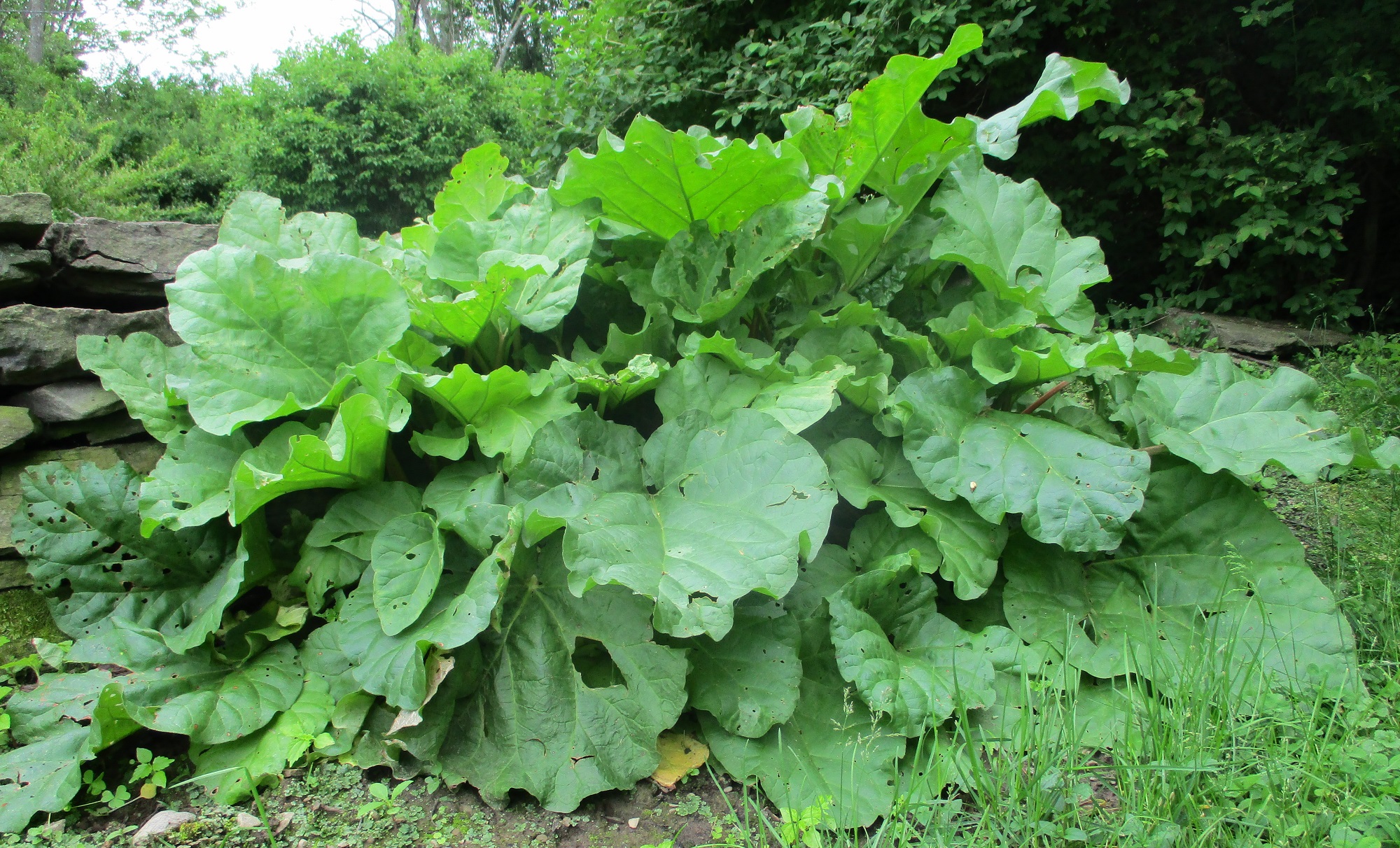 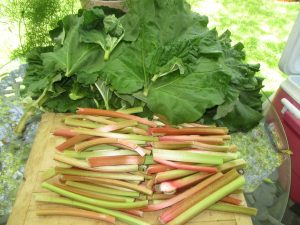 Photos and Recipe by Rick Hiduk

It’s about time to cull our rhubarb again and process another batch for freezing. In a good year, which this seems to be, we get two cuts of rhubarb, after which the stalks tend to get too tough. Two batches in the freezer is enough to represent about five percent of our winter fruit intake. It can be mixed with any berries, as well as with pineapple and other fruits. My mother used to make an awesome rhubarb custard pie, which we have not yet tried.

A number of people have asked how I process rhubarb, so I thought I’d share it with you. After several years of trial an error, I’m pretty satisfied with my process. I’m not sure if the end result lends itself to baking. I’ll let you true bakers decide that. 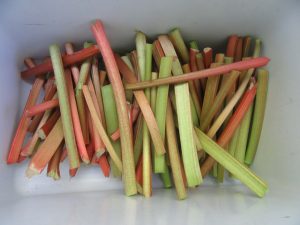 I do my first cut in late April. By then, there are usually enough rhubarb stalks at least three-quarters inch in diameter to make it worth while. I discard any that are much more than an inch thick and those that have lost their reddish hue. I also try to get into the patch before it gets too thick, as dampness can get trapped between the stalks and get a bit slimy. A little bit of slime can easily be washed off, but a lot is no fun to deal with. 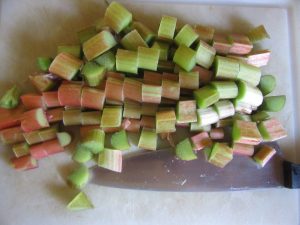 With a pair of hand pruners, cut the rhubarb as close to the ground as possible, in part to make room for the fresh, smaller stalks to follow with the second culling in mind. Then cut away the large leaves. A great second purpose for the leaves that we have discovered is to lay them out in the walking rows of your garden as a weed deterrent. You’ll be surprised at how effect they are until they biodegrade.

Wash the stalks thoroughly and lay out in a sterilized dish drainer to get rid of the excess water. Then cut the stalks into three-quarter inch segments. If the stalks are thinner, you can cut them at a little more than an inch. And, if the stalks are thicker, cut them at a half inch. The idea is to end of with pieces of similar overall size to even out the final product. I used two 10”x14” cutting boards, considering each full board of cubes to be a “batch.”

For the amount of stalks that I have shown here, I put two large pots on the stove and filled them with two quarts each of fruit juice. I recommend using 100% juice, as it will cut down on the amount of processed sugar in the final product. I’ve found that citrus juices work the best, but your tastes may vary. I used pineapple juice in one pot and a mango-flavored juice blend in the other. You can actually start heating the juice while you are cutting the rhubarb. 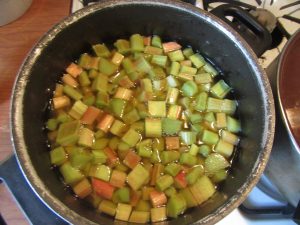 Prepare about a dozen zip-lock freezer bags on the counter nest to the stove. When the juice in each pot comes to a boil, carefully slide the cubes off each cutting board into the pots and stir occasionally with a wooden spoon. When the juice returns to a boil, immediately remove the pot from the heat to a waiting hot pad or just shut of the burner (if using gas.)

I use a large slotted to scoop the hot rhubarb from the pot into the waiting bags. A good amount of juice will follow, and that’s OK. I try to even out the amount of fruit in each bag, so go easy on the filling the first couple of batches until you get an idea of how much rhubarb will fit in a bag and still allow you to easily close it. 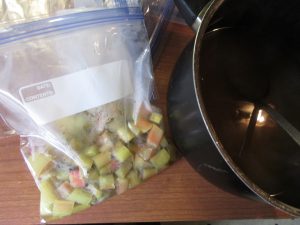 Use a non-slotted spoon to add just enough juice to each bag to rise to the top of the fruit and seal. Keep a clean cloth nearby to wipe any excess juice from the outside of the bags. (There will be some messy moments to this process.) 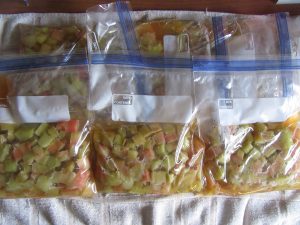 Put the pots back on the stove to return the juice to boiling. Lay out your wiped-down bags of rhubarb on dishtowels to air cool. Prepare at least two cookie sheets covered with wax paper or additional towels. I usually put the first two in the top of the kitchen freezer in advance, but it doesn’t make much of a difference in the long run. 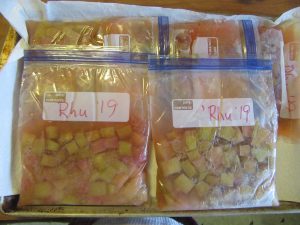 Lay out the cooled bags on the cookie sheets and place the sheets in your upright freezer for 20 minutes to a half hour. That is usually enough time for them to set up so the bags remain flat. When you can hold a bag up by the zipper and it retains its shape it is ready to move. A narrow cardboard box can come in handy at this point as you move the bags from the upright freezer to your long-term storage freezer. Your bags should stack nicely in a freezer basket, or keep them all in the box. 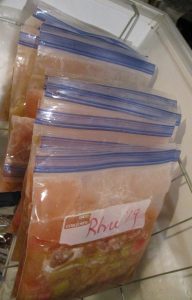 If removed from the heat as soon as the juice returns to a boil, the fruit will retain a nice consistency through the winter months to hold up in a dish as a part of any home-cooked meal. I usually thaw it, mix in some berries, then test it for sweetness. I like my rhubarb a little on the tart side, but you may want to stir in some sugar or sugar substitute at this point.

As I often do, I lost track of one of my batches, and the juice was at a rolling boil when I turned back around. Don’t despair if this happens to you. You’ve simply created a batch of rhubarb sauce, and you will enjoy it just the same.

Do not throw out the used juice. Run it through a medium then fine strainer and funnel it back into the bottles. Let it cool, then refrigerate it and enjoy it for breakfast or a quick pick-me-up during the day. It’s simply a citrus-rhubarb juice blend at that point and still 100% natural.