Photos and story by Rick Hiduk*

The months-long, contentious debate over whether or not the Wyalusing Area School Board (WASB) should allow a contractor to take over custodial services for the district’s two schools reached its climax on Monday evening. Fewer people spoke out at this second public hearing on the issue that had been continued from the previous month, perhaps because an agenda item left some believing that the board intended to approve the measure regardless of what was said.

Nonetheless, audience members were both surprised then dismayed when the individual role call of votes on the matter tipped for a moment in their favor. The final tally, however, was 5-4 with the outsourcing narrowly getting the nod. Board members Richard Robinson, Jean Vande Mark, Doug Eberlin and Joe McMahon cast the dissenting votes.

Citing figures given at the previous meeting showing that the district aimed to provide custodians with a median wage, Jason Boatman of Herrick Township effectively paraphrased rhetoric that the board has used previously to quantify its decisions to offer higher than average salaries to attract topnotch administrators. 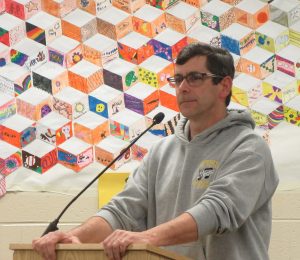 “In order to get good candidates…you should pay them a better wage…comparable to Philly or Pittsburgh…or they might leave here,” Boatman (above) began before asking, “What’s the difference between an administrator and a custodial position other than the education they acquired for the job? Each position in the school district is as important as the next one.”

Tom Dunn (below) questioned why outsourcing the custodial crew was ever seriously considered, doubting out loud that whatever money might be saved by the move would make a significant impact on the district’s budget. “Will they stay to clean up the gym behind basketball games? No. You know why? Because you won’t even know who they are,” Dunn stated. 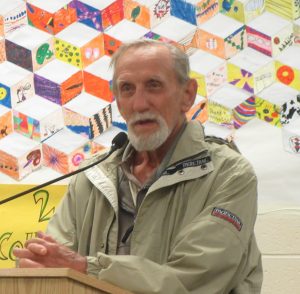 Jerry Kipp, a semi-retired bus driver of 20 years, warned the board that their decision could lead to a “swinging gate” for custodial staff. “They will stay until they find a better job, which won’t take them very long,” Kipp remarked.

“I feel like we’re treading water trying to get something through your heads that you never should have thought of,” said Floyd Lent, who has several grandchildren in Wyalusing schools. “You have an overwhelming number of people here saying, ‘Don’t do it.’” Lent was not the only speaker between the two public hearings to render thinly veiled references to the school board’s approval last year of a moderate salary increase for superintendent Jason Bottiglieri.

It’s impossible now to know whether one or two more speakers might have bent the ear or tugged on the heartstrings of the right board member to produce a different outcome, but the general lack of expression on the faces of board members when they returned from a brief executive session with solicitor David Conn suggested that the final decisions for some of them were not rendered easily.

The approval of ATS Facility Services, based in Omaha, NE, to take over custodial services for the 2019-20 school year led to a subsequent approval of an annual budget of $24,735,649 that includes no new taxes. Had the board not approved the outsourcing plan, it was noted earlier in the meeting that school taxes would be increased by 3.11 percent.

Vande Mark expressed some confusion at the budget vote, suggesting that it seemed as though approving the no-tax-increase option made it appear that she supported the outsourcing move. Board chair Chad Salsman clarified the measure, noting that, with outsourcing already approved, the board was voting separately on the budget. He told Vande Mark that she was free to vote “no” if she chose to do so. Nonetheless, Option B passed unanimously.

Salsman suggested that the passage of a budget requiring no tax increase for the first time since at least 2006 was a milestone for the district. “This is an historic moment,” he remarked.

Robinson, seeing no cause for celebration, retorted dryly, “For one year.”

“As a taxpayer,” board member Barb Prevost stated, “we will take it.”

On the motion of a new substitute custodial agreement, Robinson and Vande Mark again voted “no,” and Robinson offered the sole dissenting vote on the approval of Crystal Fauver as a short-term substitute Custodian. On a related note, the board unanimously accepted the resignation of Ann Lent from her elementary school custodial position, effective April 12.

(*Editors note: EndlessMtnLifestyles received a phone call from a school board member on Tuesday afternoon, hoping to respond to social media backlash about the custodial outsourcing vote by adding to this story that school board members have heard from many tax payers in the Wyalusing School District who were “astounded” to learn that custodians had such lucrative medical benefits and retirement packages and therefore supported the board’s intentions to contract with an independent company to manage the department.

Not only did I make it clear that the story had already been submitted to the Rocket-Courier and that no further changes nor additions would be made, I also remarked that “said” taxpayers should have had the balls to attend one of the two public hearings to make their opinions known and/or that the school board members who were following the wishes of these people should have had the courage to say so during the public meeting.)