Tunkhannock Officials Unhappy About Trehab Rumors – Voting Machines Ordered, But Not For This Election 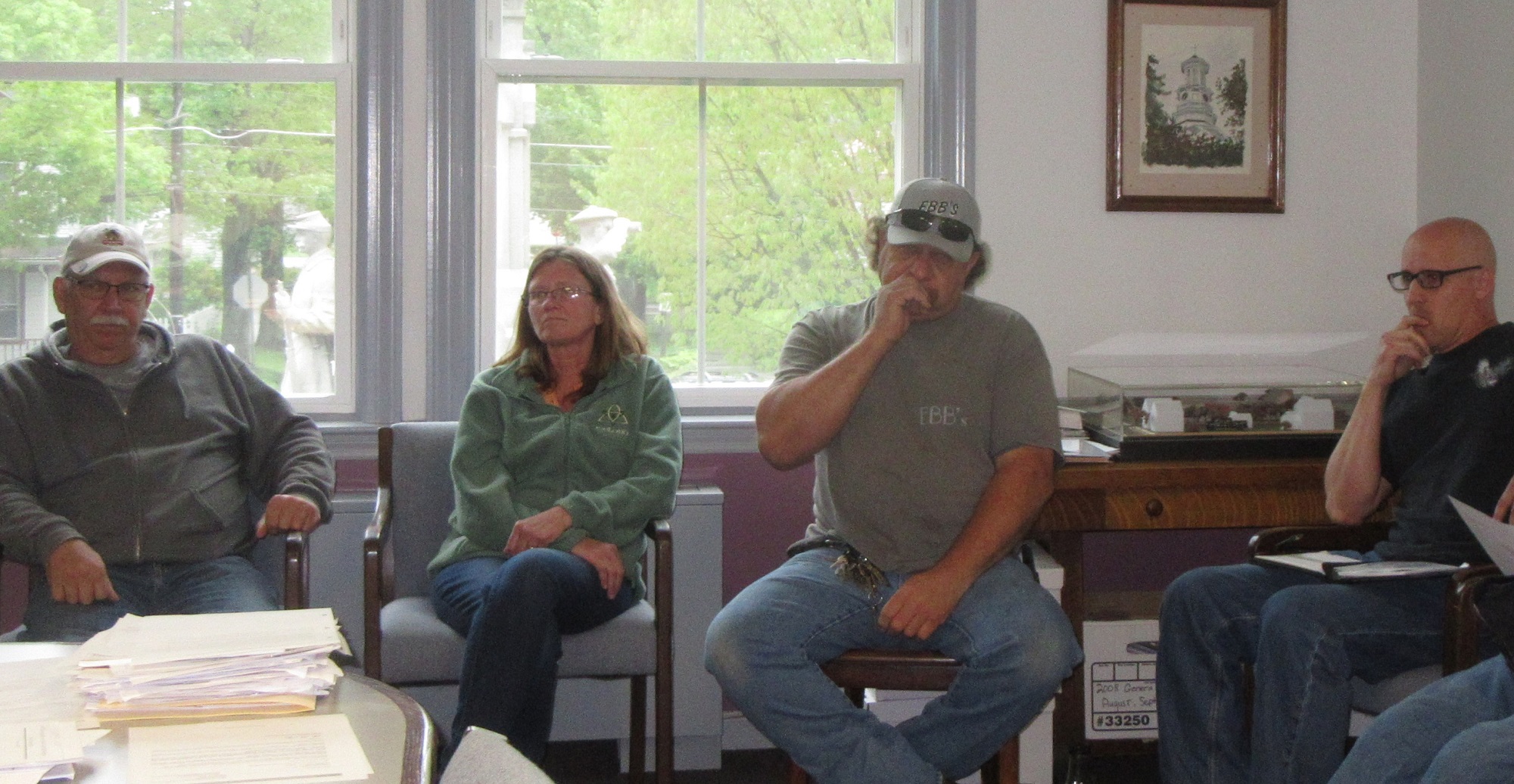 Tunkhannock Borough representatives (from left) David Wiggins, Dawn Welch, Ben Barziloski and Dan Gay approached the Wyoming County Commissioners on Tuesday to get answers about plans to provide drug and alcohol treatment within the borough.

The lead agenda item for the May 14 meeting of the Wyoming County Commissioners meeting was one of three addressing new voting machines. After months of wondering aloud whether the state, which mandated the purchase of equipment that will produce a paper record of ballot casting, would reimburse the county, a contract with Ohio-based Clear Ballot was unanimously approved by the board.

According to commissioner Tom Henry, the state assembly has agreed to foot half of the expected $366,000 cost for the machines, new booths and everything else needed to make the new system functional across the county. According to chief clerk Bill Gaylord, the County Commissioner Association of Pennsylvania is working to get the rest of the money reimbursed, but there is no official word on the progress of such a measure.

Until such compensation is received by the county, the cost of the new machines will be covered with Act 13 funds under broad interpretations of the public safety, emergency preparedness, and records keeping criteria allowed by the PA PUC. Solicitor Paul Litwin III noted, as a last resort, the county can also use impact fees to reduce taxes. If not for the Act 13 funds, he explained, the commissioners would have had to raise taxes to buy the machines and then issue vouchers to tax payers when and if the county is reimbursed.

“This accomplishes the same thing by doing it upfront,” Litwin remarked.

The original contract with Clear Ballot was renegotiated, the commissioners added, to include decertifying and disposing of the old voting machines, a responsibility and expense that would have otherwise fallen to the county. Unfortunately, the new machines will not be used for the primary elections on May 21. A final agenda item gave county election director Flo Kellett the authority to move forward with getting the new equipment ready for the general election in November.

The commissioners noted that there is a new app on the county’s website that will pinpoint a voter’s polling place simply by entering an address. One meeting attendee verified that the app also works on a smart phone.

Four representatives from Tunkhannock Borough arrived about 20 minutes into the meeting and were given the floor by the commissioners to share concerns of borough residents about the opening of a Trehab drug and alcohol rehabilitation center on Warren Street, as well as a rumored dispensary of medications for people struggling with substance use disorders.

“What we’re upset about is being kept in the dark,” said Tunkhannock council vice president Ben Barziloski, adding that borough officials are getting conflicting information as to what services will be provided at the facility on Warren Street when it opens.

A letter to the editor recently published in a local newspaper further muddied the situation by suggesting that those eligible for medication to treat their afflictions would be staggering in front of the windows of popular eateries in town.

Though it appears certain that no medication will be dispensed downtown, Barziloski questioned the practicality of a proposed dispensary in the vicinity of the Holy Pilgrim Church and the Endless Mountains Christian Academy at West and Tioga streets. In addition to school students being in close proximity, Barziloski expressed concerns of added traffic at an already congested intersection.

“It’s not that we’re against it,” Barliloski maintained. “But there are much better places for it.” He asked the commissioners if they had heard anything from Mike Hopkins, whose name has been connected to attempts to open a dispensary similar to the Wright Center in Luzerne County.

Henry responded that he has not heard from Hopkins and that it was his understanding that any dispensaries currently under consideration would be situated inside Tyler Memorial Hospital or at the Warner Complex next door. He also noted that Trehab has successfully operated a facility on Main Street in Montrose for many years without an issue. Commissioner Judy Mead added that people in need of medication currently have to go to Dickson City or farther.

In the meantime, Henry and Mead related, the opening of the Trehab facility in Tunkhannock has been delayed by some issues within the building itself. Henry urged anyone needing assistance or guidance, including caregivers to call Helpline at 211.

Commissioner Mike Stabinsky reported that a video on active shooter scenarios has been procured for county employees to watch and discuss with their department heads. It is the first step in Stabinsky’s crusade to ensure that county employees are as prepared as possible in the event of an armed intruder entering any one of the county buildings.

The video will be followed up by a question and answer session in a classroom setting. After that, Stabinsky hopes to involve local law enforcement officials in full-scale mock intruder drill at the courthouse as soon as possible.