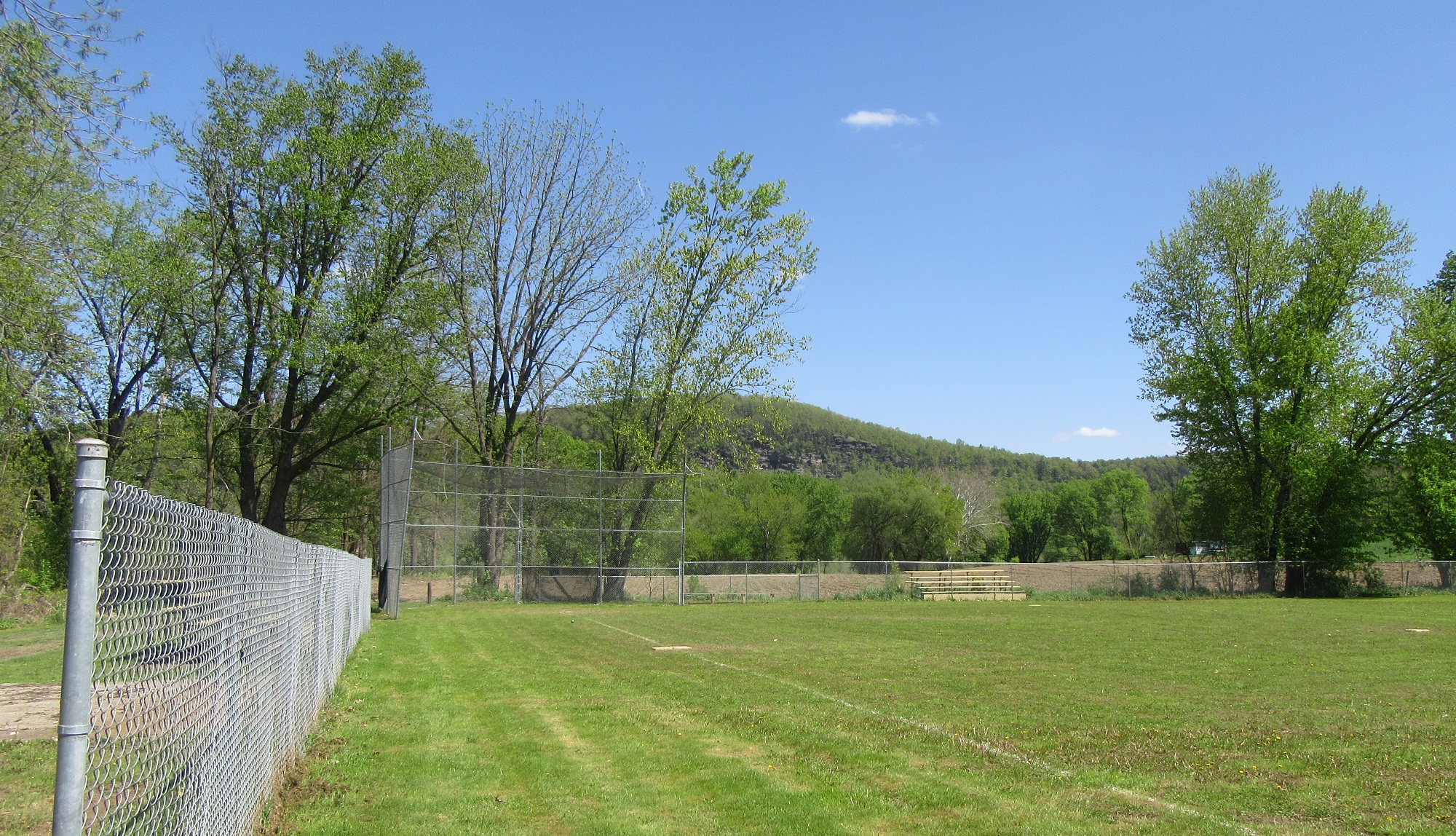 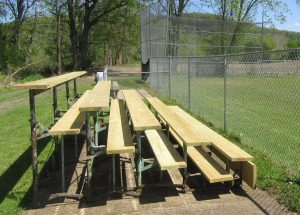 Laceyville’s Donovan Park is looking sharp and already seeing use as the 2019 baseball and softball seasons get underway. The borough is using a new mower on the fields, and members of Braintrim Baptist Church recently restored the bleachers.

After a rather costly mowing season in 2018, abetted by continuous rains and the involvement of several contractors, the Laceyville Borough Council took a different approach this year and appeared satisfied with their progress at the May 7 meeting. The public portion of the meeting on Tuesday began after a 45-minute executive session.

Council president Randy Brigham was pleased to report that the borough had purchased an older model Gravely ProMaster 60 with a 60-inch deck at a very reasonable rate of $650. Servicing and a new pair of drive wheels were needed, but Brigham says the mower works great, even though he joked that it is a rather “odd looking” machine and not as fast as newer zero-turn mowers.

It will be used primarily to mow the ball fields at Donovan Park on the other side of the river from the borough. The mowing of the ball fields, which are used primarily by members of the Braintrim Baptist Church proved to be the borough’s largest summer maintenance expense in 2018. On a related note, church members were credited to refurbishing the bleachers in the park.

Council received one bid for the remaining mowing, which includes the area around the borough building, the water company and the welcome sign at the east end of town. Michael Clauser’s bid of $180 per cut impressed council members, who were willing to approve the deal once it is confirmed that string-trimming of the same areas is included in the price. Council member Kristy Fassett expressed hope that Clauser might also avail himself for other small projects as needed.

Emergency response and solutions to last year’s flash flooding continue to be a topic of conversation as FEMA officials come to town to help Brigham assess damages and what was spent for mitigation of flooding on Main Street.

“It gets broken down into individual slices,” Brigham said of information that FEMA requests. The final report should result in some reimbursement for Laceyville via a disaster declaration that followed the flooding. Challenges include quantifying where the materials came from to build a temporary diversion dam on Main Street, as well as from which points debris was generated and where it ended up.

There are also washout issues to address, and the boundary lines between Laceyville borough, Braintrim Township and land owned by PennDOT tend to be blurred after years of addressing problems on an as-needed basis.

On a related note, seasonal road patching has begun, but subsidence and heaving, damaged drains and water on the streets likely coming from underground springs have made it difficult to get the work done and to determine the root of some of the problems. Roadways to be addressed in the coming weeks include Main, Maple, Canal, Franklin and Second streets.

Maintenance and Separation of Funds Addressed

A Thank You card was signed by council members for Robbie Wiles, a Laceyville resident who has been volunteering his time to get spring maintenance in the borough underway. “The town looks one hundred percent better since he started cleaning it up,” mayor Phil Brewer remarked.

Council member Henry Laboranti asked who owns the two “Welcome to Laceyville” signs. The general response was that they were once the property of the now dissolved Laceyville Business Association. Laboranti asked for and was granted permission for he and his wife to do some painting and general maintenance to the signs.

Council approved the opening of a few more bank accounts to hold specific funds and those for dedicated purposes. These include a fund for Act 13 money and a new capital funds and a savings account for non-budgeted equipment and improvements. Secretary Gloria Milliron agreed that separate accounts allow for more efficient auditing. Council also approved the transfer of one hundred dollars per month from the general fund back to the water fund to replace $6,466 that which was removed in 2018 for the police department.

No new action was taken concerning the possibility of hiring a new police officer, but Brewer asked for something to keep the batteries in the police cruiser charged, so that it can be driven on occasion.

Sewer manager Jaye Butler noted that he wants to begin flushing fire hydrants, but there is a small leak somewhere in the system. Any residents experiencing low water pressure are asked to call the water department at the phone number on their water bills.

Community Yard Sale Day will take place on May 25, and borough clean-up day will be held on June 1. Prices and restrictions, which include “no demolition debris or lumber,” will be advertised.