Change of the Guard Announced at Marie Antoinette Overlook 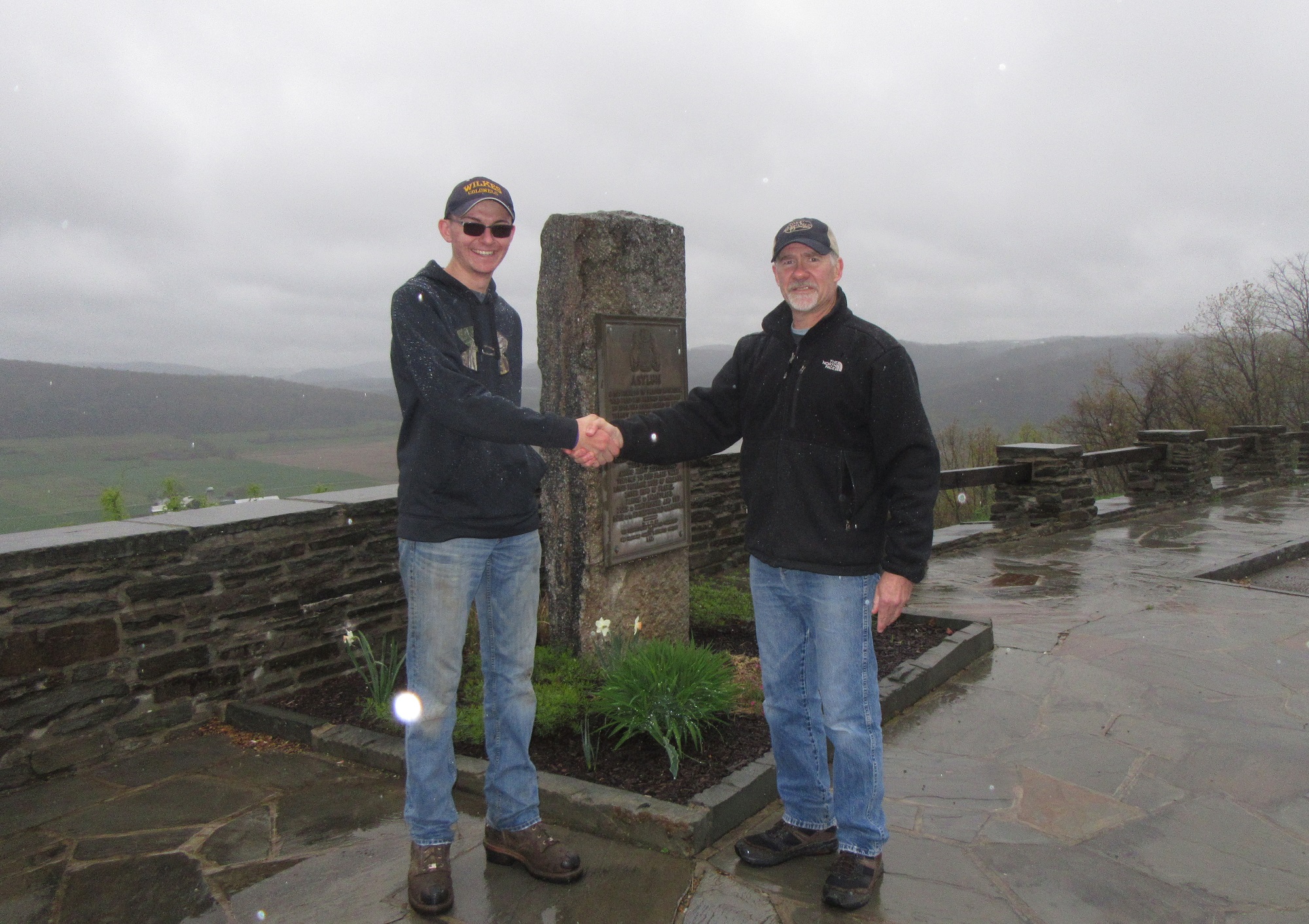 Black Walnut resident Nick Superko (left) has taken over the landscape maintenance at the Marie Antoinette Overlook in Wyalusing Township that has been handled for the past five years by Rick Hiduk of Meshoppen (right).

The Marie Antoinette Overlook is owned by French Azilum, Inc. (FAI) and serves as the perfect vantage point from which to imagine the settlement of French refugees who moved to the valley below in the late 1700s to avoid almost certain death during the French Revolution. The French Azilum Historic Site, which provides tours and history-related events, lies at the north end of the peninsula.

Two markers, one erected at the Overlook by FAI and the other by the state, provide a summary of those events. But the Overlook has become a destination in itself for its largely uninhibited view of Terry and Asylum townships, much of Wysox township, the Susquehanna River and many mountaintops to the west. The vista has long been the background for prom pictures and wedding party photos and, more recently, thousands of cell phone selfies.

About five years ago, the view was threatened by an overgrowth of weeds and sumac trees. Aware that the few people who used to voluntarily provide some maintenance at the Overlook were no longer stopping by to do the work, former FAI board member Rick Hiduk approached the board to ask if he might maintain it at a cost that would be affordable to the non-profit organization.

“I wasn’t in it for the money,” said Hiduk. “I was alarmed by the condition that it was in and the thought that the view of the valley might be lost for future generations.” But there was a second motive to his offer. “My mother and her siblings grew up on a part of the Hagerman Farm along the river down down below. Not only do I have a vivid memory of going there once as a very little boy, my father used to take me to look for arrowheads each spring when the fields were plowed. It quickly became a labor of love.”

Decades of overgrowth took almost three years to beat back between hand-pruning, string trimming and some push mowing. Hiduk also approached the Endless Mountains Visitors Bureau about mowing around the information kiosk at the south end of the parking owned by the tourist agency, eventually adding the gravel walkway. Once the bed around the stone marker was re-landscaped, the focus turned to maintenance.

“Pat Caine who owns the bar and restaurant told me that he used to use a push mower on the other side of the viewing wall, which was unthinkable when I first started working there,” Hiduk noted. “But, I thought, ‘If he did it, so can I.” Bit by bit, the lawn between the viewing wall and the retaining wall was recovered, finally bringing the appearance of the Overlook back to that depicted on old colorized post cards.

In February, Hiduk contacted FAI board president Joyce Kerrick, who also has a farm in the valley, to inform her that he felt it was time for him to pass the torch to someone younger. “The work along some parts of the retaining wall is pretty tricky,” he related. “There’s quite a drop there and, at least twice last summer, I thought that either I, the mower, or both was going over the edge.”

The message was shared with the board, and member Deborah Courville asked her landscaper, Nick Superko, if he might be interested in taking on the job. The Black Walnut resident and Wyalusing Valley High School graduate is currently attending Wilkes University, where he is pursuing a double major to obtain a Doctor of Pharmacy Degree and an MBA with graduation set for 2024.

“Taking care of the Marie Antoinette Overlook appealed to me because it is rather historical,” Superko stated. “I enjoy everything about history and enjoy reading historical markers. I hate it when I see markers and monuments that are overgrown or in states of disrepair.”

Superko currently maintains several parcels for Braintrim Township, as well as the Black Walnut Cemetery, and has his own equipment. He met up with Hiduk at the site on a recent rainy Sunday to learn what has been done to date.

“We are thrilled to have found such and eager and able young man to take over the maintenance of the Overlook,” Kerrick said of Superko. “We appreciate the work that Rick has done to bring this cherished Pennsylvania icon back to life and his willingness to give Nick any guidance that he may need as the seasons change.”

Kerrick noted that opening day at French Azilum is Friday, May 24. Also, a new sign paid for by FAI with assistance from the Endless Mountains Heritage Region will be erected soon at the Overlook.