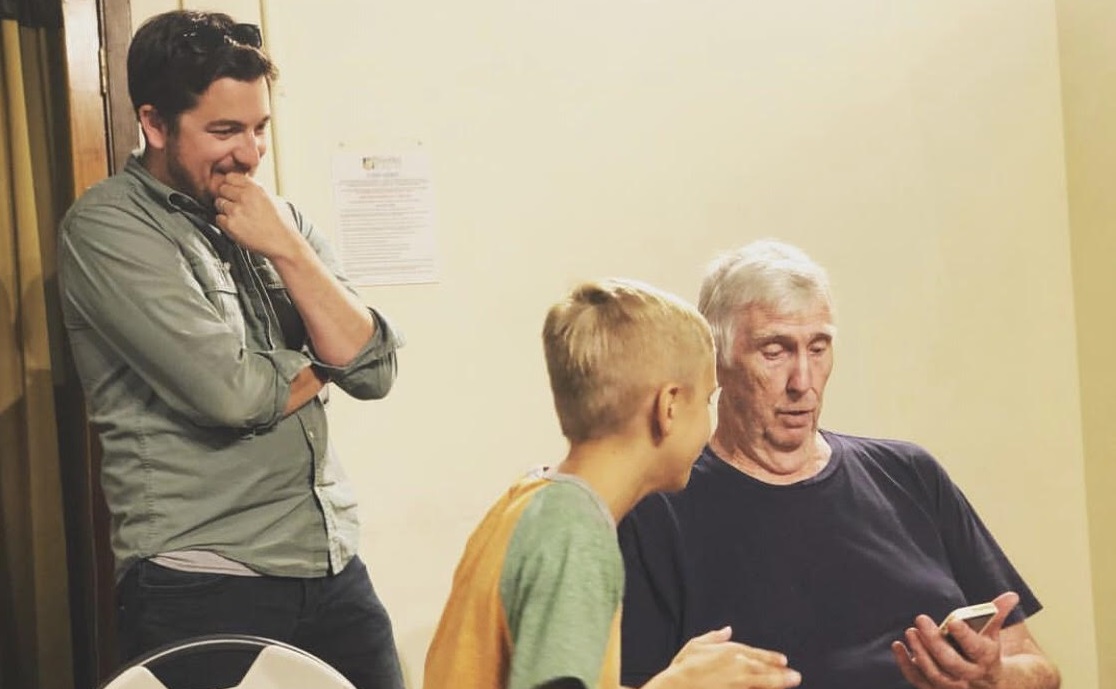 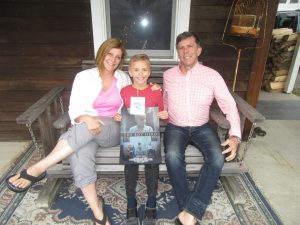 Red Flight Pictures director Kyle Thompson (top, left) observes the interaction between actors Jeffery Benson (center) and Michael Callahan during their audition for “The Boy Hero.” Jeffery (above, center) and his parents, Pam and Craig Benson, returned home on April 30 from a 10-day trip to Florida, where the short film in which Jeffery had one of the two starring roles was debuted at the Fort Meyers Beach Film Festival. Pam and Craig also had cameo roles in the 30-minute movie that is geared for cancer awareness and raising funds for St. Jude’s.

Photos by Pam Benson and Rick Hiduk/Story by Rick Hiduk

Jeffery Benson, a 10-year student at Susquehanna Community Elementary School (SCES), has enjoyed a quick rise as a professional actor since taking part in a talent show at his school last year. On April 27, Jeffery walked the red carpet at the 13th annual Fort Myers Beach International Film Festival, where the movie “The Boy Hero,” in which he starred as an eight-year-old leukemia victim, made its debut.

Along with his parents, Craig and Pam Benson of Thompson, Jeffery spent a week in Fort Myers Beach, where they took in dozens of other films and enjoyed a unique treatment as industry royalty. Because the producers of “The Boy Hero” were also intrinsically involved with the festival, the short film was not eligible for any awards, but that did not prevent many in the business from making the time to acknowledge Jeffery’s talents and share advice with him as to how he might further pursue his dreams.

When Jeffery won the talent show after an impressive vocal performance of a jazz original written by a friend of the family, SCES teacher and panel judge Daniel Mowrer told Jeffery and his parents that he had “great stage presence” and that they should consider additional acting opportunities.

Pam had learned that Montrose High School English and drama teacher Heather Winn also provided services as an acting coach. According to his parents, Jeffery was one of the youngest actors with whom she had worked.

“He was an experiment for her, and she was great,” said Pam.

“He had a lot of life in him, and I knew that he would be fun to work with. He was willing to try anything,” Winn remarked. “He has really good instincts, and that helps. If I asked him what he though, he would tell me. And that will get him anywhere.”

In the meantime, they looked for audition opportunities via websites like Backstage and Actors Access. He sent recordings to both and landed a speaking role in a short film produced by a college student, a small part in a television commercial, and a possible call-back to do some voice-overs for an animated feature

Jeffery subsequently got a callback from Red Flight Pictures, a film company that invited him to New York City in August 2018 for to audition for “The Boy hero,” which was geared to cancer awareness with a portion of the profits dedicated to St. Jude’s Children’s Research Hospital. Jeffery admits that he didn’t know a lot about cancer at this point, other than that it is a “horrible sickness that was life-threatening to both children and adults.”

While waiting his turn, Jeffery made the acquaintance of Mike Callahan, who had only a few years on Jeffery pursuing acting as a retirement career. The two struck up a casual conversation, having no idea that the rapport they were building would translate into their first starring roles.

“We saw them separately and then together,” Red Flight producer/director Kyle Thompson related. “We didn’t tell anybody that they could be paired up. I don’t think they had any idea that that would be the case.”

Jeffery and Callahan were called back on to the set for a screen test. To further gauge their chemistry, Thompson asked Jeffery to teach Callahan how to play his favorite video game on his phone. What the Bensons did not know is that Thompson had instructed to be a little difficult and not so accommodating, a personality trait that Callahan’s character, Frank, would exhibit from the onset of the story. Thompson was certain from that interaction that he had found his stars, with Jeffery set to portray Max, a superhero moniker that the slightly annoying and messy boys assumes.

In November, cast and crew met in Brownsville, PA, where Thompson had found an abandoned hospital that had been kept up in hopes that it could be sold and continue to serve as some sort of medical facility. Its functional condition, including IV poles, gurneys, wheelchairs and reception stations fit Thompson’s modest $5,000 budget for the philanthropic effort.

“They were very long days,” Pam said of the 15 hours spent on the set over the course of four days.

“We had him working probably a lot longer than we should have on the film set,” Thompson remarked.

“The photographer was a perfectionist, so it took a while to get everything right,” Pam recalled. One of the trickiest anomalies of the filming was fitting four-foot-seven Jeffery and six-foot-seven Callahan into the same frame. They are always seated or laying down when they are in the same scene.

Max and Frank have differing missions. Max is working on a school assignment to create greetings cards for all of his friends to fulfill his role as a superhero. Hobby artist Frank wants to complete one more drawing of his deceased wife and believes that he is running out of time. Not only do these two unlikely worlds collide, Frank and Max form an impenetrable bond and begin to assist in each other’s projects.

Thompson considers both Jeffery and Callahan to be “naturals,” considering their lack of experience. “Jeffery is smart beyond his years,” he offered. “I felt like I was directing an adult, to be honest with you.”

The trailer was released in February, offering the Bensons their first taste of what was to come. “We got to hear it for the first time with the music and other sounds, and that really brought it to life,” Pam related.

“The Boy Hero” was not eligible for any awards at the event in Fort Myers Beach because Thompson has been collaborating with the festival organizers for the past eight years, conducting workshops and providing speakers. This year, some of the Red Flight personnel were also serving as judges.

“A lot of people approached us later and said that the film and Jeffery and Michael would have won awards,” said Thompson. “That was our own little win.” It was the only sold-out show at the festival.

“The Boy Hero” and some of Red Flight’s other new releases can now be submitted to other festivals, he added, noting that he current has his eyes on The Rhode Island Film Festival.

Having literally been home from Florida for only minutes at the time of this interview, the Bensons were still very excited about the film festival experience and are looking forward to attending additional events and participating in more auditions as Jeffery’s desires for the future evolve.

When asked what Jeffery’s prospects are, Thompson couldn’t have been more flattering nor assertive in his encouragement that the youth continue on his current path.

“It’s the beginning of a journey. There isn’t a limit as to where he can go,” Thompson stated. “He’s already light years ahead of a lot of us as film makers and other actors I know. I’m sure that we will see him on some sort of TV show or on the Oscars. There is no doubt in my mind.”

back in Susquehanna County, Jeffery was not in a great hurry to return to school knowing that state testing awaited him.

And, though he has moved on to greater opportunities, his first acting coach noted that she would welcome Jeffery to audition for any child roles in productions she might oversee in the near future. “I was thrilled to take what I knew and help him,” said Winn. “I was really grateful to be able to work with him and give him some basic tools to get started.”

As this story was going to press, Pam Benson relayed the results of Jeffery’s most recent audition:
“Hollywood called today! Jeffery is being considered to play Michael Landon’s son in a feature film about his life. A-List Stars are slated to play his parents. Now that I told Jeffery all about my childhood watching Michael Landon on TV, he’s excited too. Can’t wait to see what happens next!” 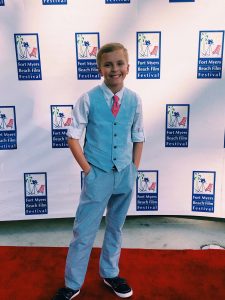 Jeffery on the Red Carpet at the film festival in Florida