Pair of School Board Candidates Share Ideas in Wyalusing 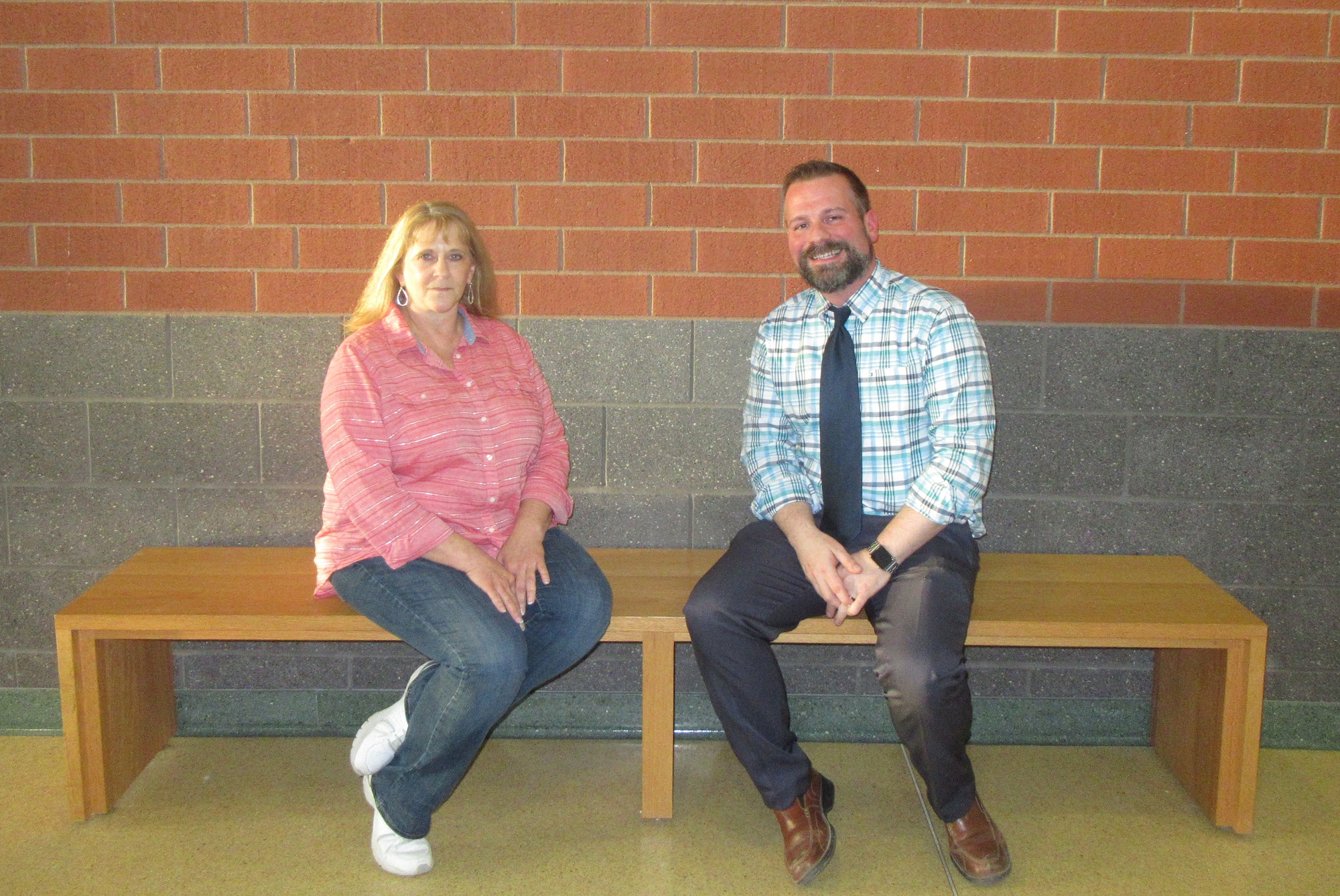 Wyalusing Area School Board member Barb Prevost (left) and Chris Brown, who is running his first campaign for a seat on the board, answered questions and shared their ideas for taking the school district into the future with a smaller audience than expected at Wyalusing Valley Elementary School on April 24.

Two candidates for the Wyalusing Area School Board met with concerned citizens on April 24. The format of what was intended to be a “meet and greet” on the stage of the elementary school all-purpose room was modified into a round-table discussion that allowed for some relaxed give-and-take on issues important to those who attended.

WVES PTO president Kelly White (below), who organized the event, attributed the lower-than-expected participation rate among sitting school board members and those actively campaigning for the seats to concerns that audience members might focus on the ongoing debate over the school board’s interest in outsourcing custodial positions. There were also numerous extracurricular activities happening simultaneously across the campus, as evidenced by the number of people and parked vehicles. 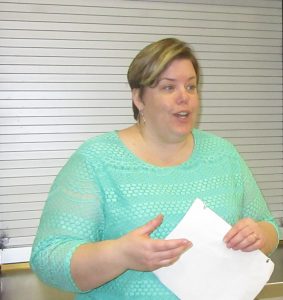 In her opening remarks, White described the event as a non-partisan gathering designed to give the community an opportunity to meet the candidates and ask questions. “The purpose is not for any of us on the WVES PTO to take a stance and promote one candidate or another,” she stated, “but instead just a chance for our community to know all of our candidates and learn more about their goals and beliefs.”

Colleen Sands of Laceyville asked Prevost and Brown what they envisioned for the school district five and 10 years into the future, especially pertaining to technologies and an expected student population boom.

Prevost was the first to address those seated at the lunch tables. She noted that her primary goal in her seven years on the board has always been to provide the best education possible for all of the students in the district within the constraints of the district’s budget and often-unfunded state mandates.

Ideally, Prevost added, she wants to see the district continue to enhance the technological aspects of its curriculum to prepare students for a job market that already relies so heavily on computers. “We have to have all the same tools that they will use when they go to work,” she stated. Nonetheless, Prevost admitted that it breaks her heart that schools plan to discontinue the teaching of cursive handwriting.

Brown agreed that state mandates are pushing school budgets beyond their limits but feels that more can be done to get lawmakers in Harrisburg to change their way of thinking. Currently, he conceded, “That pot is empty,” in reference to the money offered by the state to fund mandates. “You’re really running against the tide.”

As an economic development manager and advocate for children with special needs, Brown related that he has experience lobbying with legislators for important initiatives. “The more you get in front of their faces, the more they have your back,” he remarked.

Brown feels that county-wide plans to increase broadband internet access will help the schools produce a quality work force. Businesses are looking for young people who already have skills and specified training, he noted, and the vocational education model from decades ago has made a comeback. In that regard, the Northern Tier Career Center in North Towanda is becoming an increasingly valuable asset, Brown added.

“The old adage that everybody has to go to college to sustain a family is no longer true, especially in rural America,” he stated. Brown cited a Penn State University professor who lamented a generation of engineering students who “know the theory but have never actually held something in their own hands.”

Another issue that Prevost and Brown agreed is finally getting more attention and support from Harrisburg is the drain that cyber schools put on a district. According to Prevost, cyber schools cost about $11,000 per student per year. “A brick and mortar school offers so much more, but cyber schools get the same amount of money,” she explained. Prevost added that it upsets her when she sees television commercials that advertise cyber education as “tuition free.”

Audience member Suky Burgess noted that cyber students can participate in the district’s extra-curricular activities, but they cannot get a diploma from the school.

One manner in which school districts, including Wyalusing, are trying to counter the expense of cyber schools to their budgets is to offer their own cyber school. Legislation is moving along that will make parents shoulder the cost for any cyber education outside the district.

The other advantage to the district’s program, Prevost related, is that the district can monitor each student’s participation. “Our cyber students are logging in,” she maintained. “If they don’t, the parents are notified.”

Are Cellphones Helping or Harmful?

There were no teachers among in attendance, so some matters of discussion were missing a crucial element of discourse. Board members, parents and bus drivers provided the bulk of the comments on matters where educators themselves might have disagreed or been able to balance the conversation with very different perspectives.

The prevalence of cellphone use among students sparked a heated debate as to how they affect the attention span of the students, as well as their social skills and manners. The latter was also addressed as a generational issue, with Prevost suggested that some of the fault lies with parents who are no longer teaching manners and responsibility at home. “Teachers are doing a lot of the parenting because the kids are not getting it at home,” she remarked.

“They are losing the ‘soft skills,’” Brown added, “like greeting someone by looking them in the face and shaking their hands. We need to be teaching them that life is not always fair and that you don’t always get what you want.”

There are exceptions, of course, and several participants spoke up on behalf of Wyalusing students who have exhibited exemplary manners and social skills at regional and state student gatherings. Bus driver Stan McClennen said that the poor behavior of students from other districts at an FBLA conference and away sporting events that he has attended made him very proud of the Wyalusing students by comparison.

Bringing School Board and Parents Together

On the topic of accessibility and transparency, Prevost and Brown were asked what might be done to engage more parents in the business of the board and cut down on the post-meeting “quarterbacking” that has become so rampant on social media.

Some suggestions made to which both Brown and Prevost agreed were the ideas of live-streaming school board meetings, much as sporting events are currently; issuing robocalls to remind parents of school board meetings; and encouraging the public to address concerns to school board members via email if they are unable to attend the meetings.

Prevost said that “sunshine laws” prevent school board members from discussing most issues when the public cannot see nor hear the conversions. To the best of her knowledge, she felt that individual school members can at least acknowledge concerns addressed via email and bring them to the attention of the board.

Afterwords, Kelly White expressed satisfaction that, while the event did not go quite as planned, those in attendance were perhaps afforded a more intimate opportunity to get to know both Prevost and Brown.

“Barb is very candid, and I believe that people found her responses to be very relevant to their questions,” said White. “As a new candidate, many people in our school community are not as aware of who Chris is. I think that it was great to have him there to be able to introduce himself and his intentions for running.”

While both candidates agreed on most of the issues that were raise, White added, “Chris and Barb presented themselves in their own manner and showed how they are different. I think these two balanced each other nicely, and I think they appealed to the audience that night.”