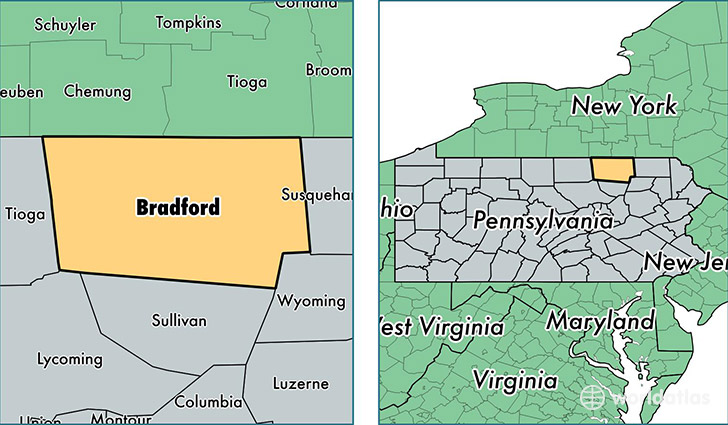 The study was conducted by the U.S. Geological Survey in cooperation with the Northern Tier Regional Planning and Development Commission and is part of a regional effort to characterize groundwater in rural areas of Pennsylvania.

Since Bradford County has been highly developed for Marcellus Shale natural gas extraction, the study looked at more specific results for methane as well as sodium, chloride and bromide that can be associated with drilling operations and brine.

The study found, “Four of the six groundwater samples with the highest methane concentrations had chloride/bromide ratios that indicate mixing with a small amount of brine (0.02 percent or less) similar in composition to those reported for gas and oil well brines in Pennsylvania.

“In several other eastern Pennsylvania counties where gas drilling is absent, groundwater with comparable chloride/bromide ratios and chloride concentrations have been reported, implying a potential natural source of brine.

“The majority of Bradford County well-water samples, including the samples with the highest chloride concentrations, have chloride/bromide ratios that indicate predominantly anthropogenic [human-made] sources of chloride, such as road-deicing salt or septic effluent.

“Brines that are naturally present may originate from deeper parts of the aquifer system, whereas anthropogenic sources are more likely to affect shallow groundwater because they occur on or near the land surface.

“The available data for this study indicate that no one physical factor, such as the topographic setting, well depth, or altitude at the bottom of the well, was particularly useful for predicting those well locations with an elevated dissolved concentration of methane.

“The 2016 assessment of groundwater quality in Bradford County shows groundwater is generally of good quality, but methane and some constituents that occur in high concentration in naturally occurring brine and also in produced waters may be present at low to moderate concentrations in groundwater in various parts of the aquifer.”

A 2011 study by the Center for Rural Pennsylvania done by Penn State specifically on the impact of drilling on rural drinking water supplies in the Marcellus Shale region found 40 percent of wells failed at least one drinking water standard for coliform, manganese and other parameters before drilling.  Methane was also found in 20 percent of the wells before drilling, but below advisory levels.

These results are generally consistent with over 30 years of research by Penn State showing 40 percent of wells do not meet one or more drinking water standards.

2019-04-21
Previous Post: Water Water Everywhere – Live it and Learn It with the EMHR
Next Post: Weather Gives Meshoppen Egg Hunt a Break