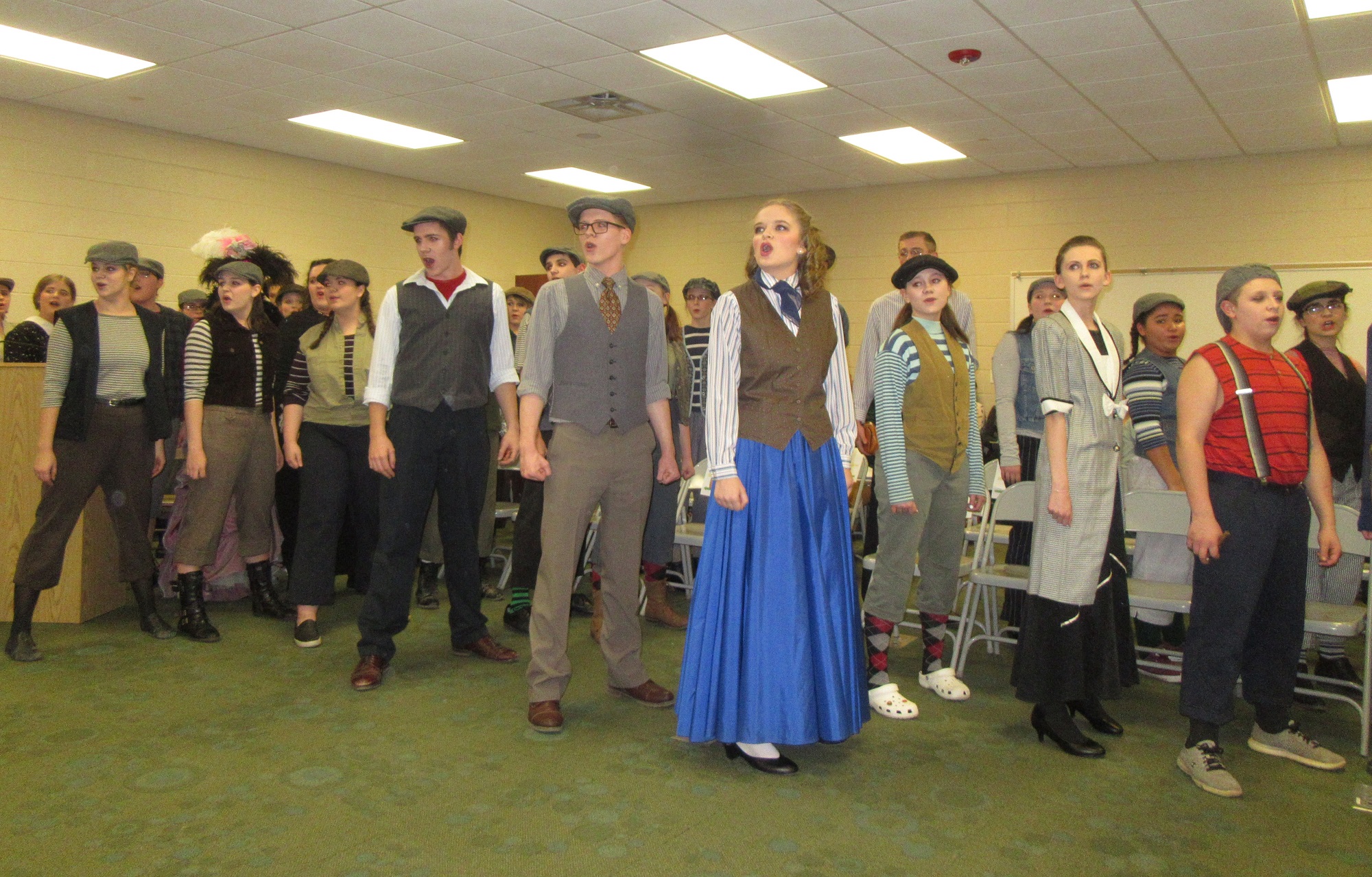 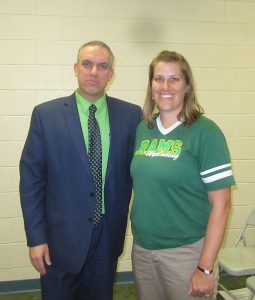 The cast of “Newsies” strikes a determined pose (top) during a rendition of “Once and For All,” one of the full-ensemble pieces in this year’s high school musical. Wyalusing school superintendent Jason Bottiglieri (above, left) congratulates life skills teacher Susan Kilmer for being selected by the Pennsylvania Association of Rural and Small Schools as the state’s Rural Educator of the Year.

Concerned that a social media storm that erupted upon news that the Wyalusing Area School Board was looking at various options for maintaining the buildings and grounds in the wake of Bob Brigham’s planned retirement at the end of June prompted board chairman Chad Salsman to prepare a statement in advance. Apparently, what he had to say satisfied enough concerned citizens to keep derisive commentary at bay Monday evening.

On Monday, April 8, the board will conduct a public meeting on the outsourcing proposal, which Salsman maintained will likely result in most of the same maintenance employees remaining at the campus. The primary difference, he explained, is that they will be paid by another company rather than the school district. A similar decision was made for consolidating the district’s lunch programs that has been largely successful.

Even though half of the audience for the March 11 school board meeting was comprised of students appearing in the upcoming school musical, attendance was still well above average for the monthly meeting. Public sentiment on the matter caught the attention of the Pennsylvania State Education Association (PSEA), whose communications specialist Jessica Sabol was in attendance.

Sabol did not speak but provided counterpoints to the media immediately following the meeting in which she insists that the “district wants to take middle class careers and turn them into low-pay, part-time jobs.”

Another press release titled Keep Strangers Out of Our Schools suggests that the district “is considering selling the safety of our children to the lowest bidder to save a few dollars.” Salsman called that a “false argument,” noting that all new employees are strangers at first, “until we get to know them.” He repeated that “the bottom line is that we do not anticipate any of our current maintenance employees to lose their jobs or be replaced…as long as they are good employees who wish to continue to work for the private company.”

Nobody had registered in advance to offer public commentary and, when Salsman asked the audience if anybody cared to talk, the room fell silent. With no final executive session planned, the meeting was quickly adjourned and both attendees and board members started to exit the room. 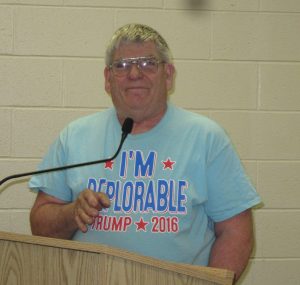 Only at that time did local resident Floyd Lent (above) walk to the podium, seize the microphone and demand to be heard. His statements were barely audible over the exodus of the crowd but directed at what he loosely referred to as a callous, do-nothing board. Jean Vande Mark was one of the few board members still seated and objected strongly to his assertion. Salsman banged his gavel, told Lent that his comments were out of line and reminded him that the meeting had been adjourned. Lent argued that he was unable to hear Salsman’s statements and instructions and that the crowd was being hushed up and pushed out.

When the board approved Brigham’s resignation, Salsman and superintendent Jason Bottiglieri agreed that the 36-year employee most likely has spent more time on the campus than any other worker, answering the phone at any hour and returning to the schools many times after hours to remedy situations that had popped up. They said that he had a “servant’s heart.”

“It’s been a great ride. I’ve really enjoyed it,” Brigham replied. “Like anybody who does well, it’s because of the team. I’ve had fantastic employees.”

Regardless of the board’s final decision on how to replace Brigham, members voted unanimously to create a new position titled Director of Human Resources and Facilities.

Wyalusing Valley Elementary School life skills teacher Susan Kilmer has been named the Pennsylvania Rural Educator of the Year by the Pennsylvania Association of Rural and Small Schools (PARSS). Kilmer was nominated by Dr. Bottiglieri for her determination to “not except failure of any kind.”

“I feel that life skills is what God put me on this Earth for,” Kilmer remarked, as she accepted a certification from Bottiglieri. She expressed gratitude for being able to consult with engineers during the construction phase of the new elementary school to design the space that would become the life skills lab before the curriculum had been fully developed. Kilmer credited the other members of her therapy and life skills staff for the success of the programs.

She will be formally recognized by PARSS at a conference in May, when she will also received a $500 check to put towards a project at the school.

Board Gets Preview of Spring Musical

The full cast of “Newsies,” this year’s musical presentation directed by Robert Shumway and Carol Madill, was on hand in full costume and makeup to deliver a rousing rendition of “Once and For All,” a song that cast member Greg Boatman explained represents the determination among the newspaper employees to get a fair deal out of company moguls. Greg, Mackenzie Tewksbury and A.J. Rhodes led the number. The public performances run from this evening (Thursday) through Sunday, and Friday’s show is almost sold out, Mackenzie noted. 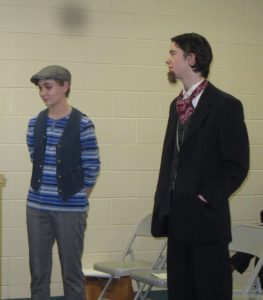 Among the cast were Christian Werner (above, right) and Katie Mills, who stayed behind to answer questions about their upcoming PMEA All-State band competition. Christian, who plays clarinet, told board members that going to states has been a long-time goal of his. Katie, it was noted, not only qualified for states as a trombonist but was also selected to compete at an All-Eastern band event. The students, in turn, thanked their families for their support and credited their teachers for quality instruction. 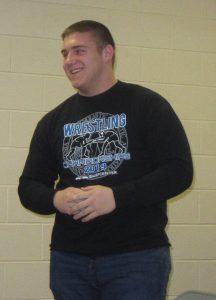 Also recognized at the meeting was senior R.J. Wildrick, the school’s sole state wrestling qualifier. He described his experience as a bit overwhelming but exciting. “Honestly, at first, it was pretty terrifying,” he said of the scope of the event. Wildrick (above) noted that he prefers not knowing in advance the tactics of his opponents but was also critical of his own performance, suggesting that he should have won his first match. 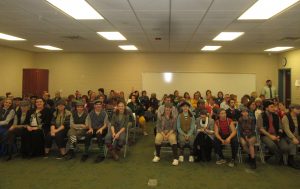