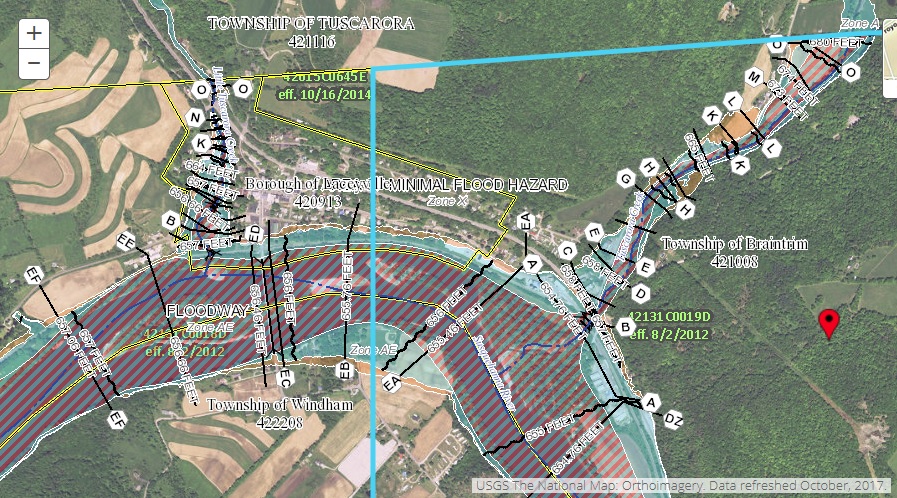 Regional zoning and flood plain adviser Gary Evans spoke before the Laceyville Borough Council on Tuesday evening and offered his services to assist the municipality in assessing the new FEMA flood plain maps and developing a flood plain ordinance. Council chair Randy Brigham noted that, if the borough doesn’t adopt an ordinance, they can expect no federal help should the town be flooded again.

“If we don’t stay abreast of these changes and we have another catastrophic flood and there are claims,” Brigham stated, “we can’t apply for assistance.”

Evans currently provides services for neighboring Braintrim, Mehoopany, and Meshoppen townships at an hourly rate. “We’re all on a bit of a learning curve with it,” Evans explained, noting that the maps are updated occasionally and not necessarily just because of a large high-water event. One of the biggest changes is that shades of color on the map now indicate percentages of potential flooding rather than the old way of looking at 50-, 100-, and 500-year floods.

As the borough’s flood plain manager, Evans would work with property owners along the river to bring them into compliance. The potential flooding situation in each municipality is unique, he continued. While Braintrim and Meshoppen townships have numerous homes and cabins along the river, one of the bigger concerns in Laceyville is potential debris that can float downstream and become a liability to someone else. Sheds for example need to be anchored to the ground or have flood gates so that water can pass through them.

While the members of the relatively new council were not aware of any flood plain ordinance having been adopted by the borough, new secretary Gloria Milliron insisted that there must be one on file, as every municipality was required to adopt one after the 2011 flood to dictate which property owners were required to purchase flood insurance. Brigham was aware of at least nine properties that were insured and noted that there are approximately 30 structures included on the new maps.

Evans related that FEMA has provided a template for a flood plain ordinance that has been slightly modified by the other municipalities and that he could provide copies of those for review by the council. Council member Kristi Fassett said that she would forward the ordinance drafts to the borough’s solicitor while Milliron looks for the previous ordinance.

Brigham expressed hopes that flash flooding issues in the borough might also be addressed under the revised plans, noting that water cascading through town during several thunderstorms last summer were a bigger issue than river flooding.

To address the flash flooding and ongoing drainage problems in town, Brigham has identified them as two separate projects and asked engineers from the Larson Group to devise plans and estimated costs for fixing them. The cost to fix the drainage problems at the west end of town was projected to be $14,108 and a price tag of $69,214 was assessed for the issues at the east end of Laceyville, neither of which the borough can afford.

After looking at the plans and the situation at hand, Brigham is confident that the borough can collaborate with Clark Excavating to purchase eight-foot culvert sections, sluices, and non-traffic-bearing storm grates at a fraction of the estimated cost to fix the problem at the east end of town – possibly for under $3,000.

Council member Henry Laboranti noted that mowing season is approaching quickly and the borough has not yet put out bids for contractors to take care of several key grassy areas in town. In part, that is because council would like to purchase a mower and do most of the work without contractors. Mayor Phil Brewer agreed that it might be the right time for the municipality to buy a zero-turn mower, and water company manager Jaye Butler recommended that the council open a line of credit at a nearby dealer and use the savings from not hiring a contractor to pay off the loan in 18 months.

Another question facing the council is just how much maintenance Donovan Park on the opposite side of the river needs. While there are future plans to renovate the park and add new bleachers and other features, the ball field at the park was only used occasionally by a local church last year, and church leaders have told the borough they are not even sure if they will use it at all this year. That said, Brigham suggest that it might only need to brush-hogged occasionally rather than mowed on a weekly or bi-weekly basis, thus saving the borough some more money.

Brigham had made a point at the Feb. 5 meeting of denying any contact from representatives of the Dollar General retail chain about locating a store in Laceyville. Ironically, he noted on Tuesday evening, he was contacted by CGB Market Planning the very next day about finding a suitable location for a Dollar General store.

“We are not making deals with anybody,” Brigham asserted. “They are doing a feasibility study.”

Nonetheless, he continued, if a Dollar General is to be located in the area, “We want it in the borough and not on the outskirts of town. We will work with them to help them find a spot in the borough. The more that we have going on here, the better it will be for everyone.”

CGB representatives told him that they see the potential for increased traffic through town as the gas industry continues in its current boom cycle and new construction is planned in nearby Wyalusing. “They see an influx of people and jobs along routes 6 and 367 and from across the river,” Brigham explained. “Laceyville is right in the middle.”

Update on Police Department and Cruiser

Since the Laceyville Police Department was disbanded at the beginning of the year, Brigham has taken the police cruiser for a drive every few weeks to keep it running. The borough would like to keep it and possibly use it as a codes enforcement vehicle.

In the minutes from last month’s meeting, it was noted that former police officer Kevin Costello had missed two court appearance for which he would have been paid by the borough, and council voted to remove him from their insurance coverage.