By: Rick Hiduk
In: Business News
With: 0 Comments 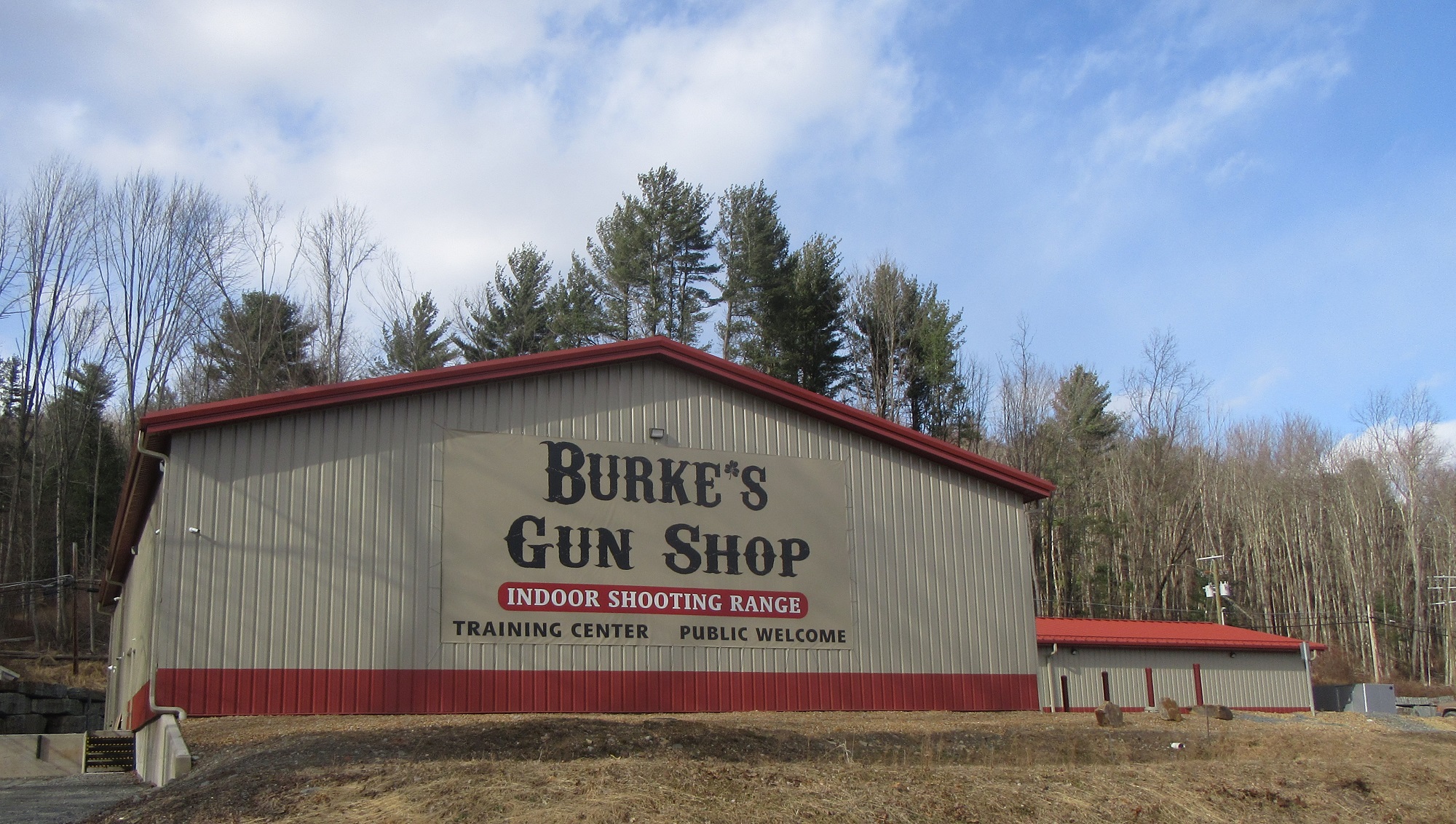 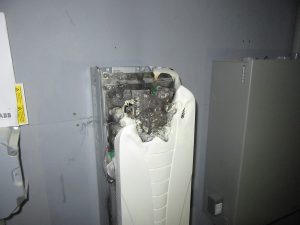 An electric panel (above) that controls the shooting range at the new Burke’s Gun Shop in Meshoppen Township (top) was severely compromised by a jolt of electricity that came into the building via a downed power line during Monday’s wind storm.

Both of Burke’s Gun Shops were a flurry of activity on Monday. At the Black Walnut location that has served for many years as headquarters for the business, employees and friends were feverishly packing firearms, ammunition and other stock. A sign taped to the outside of the entrance explained that the store was closed and moving

At the new location on Trail Road in Meshoppen Township, additional employees and contractors were readying for a planned opening just three days away, but they were working in near darkness. Between 10:30 and 11 am, a tree downed by heavy winds snapped a power line in the woods behind the shop, sending a powerful jolt of electricity into the building that fried an electrical panel and briefly set it on fire. 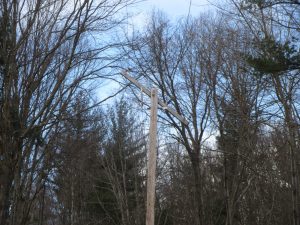 According to the Burkes, a dead ash tree fell into the lines and broke a cross-arm. The loss of ash trees in the region to the ash borer in recent years has resulted in a crisis for all utility companies and municipalities in the area. The brittle trees are coming down faster than they can be systematically removed.

“We aggressively tackle ash trees before they tackle us,” said First Energy spokesman Todd Myers. Of nearly 19,000 trees removed from right-of-ways in the Endless Mountains by First Energy’s contractors last year, at least 18,000 were ash trees, he noted. Unlike other trees, such as maples and oaks, when an ash tree dies, it is dead to the root.

“Ash trees rot very quickly,” Myers explained, noting that they often grow in clusters. “When one falls, they tend to take their buddies with them.”

Business owner Pam Burke praised volunteers from Laceyville and Meshoppen fire departments for responding to her 911 call within 15 minutes and quickly extinguishing the blaze and bringing the matter under control.

Not all of the building lost electricity, but workers cut power in the rest of the building as they waited for someone from the electric company to arrive and inspect the situation. As of 3 pm on Monday, the only answer shop owners had received via text from Penelec was that electricity to the general area should be restored by late evening.

“We turned the power off to our own building to prevent further damage,” Pam Burke explained. “We don’t know the extent of the damage until we get an electrician here.”

When another cross-arm closer to Tunkhannock was broken by a tree fall, power to 2,100 customers was temporarily cut off. At the height of the storm around 3:45, Myers estimates that 3,500 customers in Wyoming County were without electricity. Service to most of them was restored by 5:30 pm.

In the meantime, the community rallied around the Burkes and delivered generators to the new location to provide lighting to get the new shop in order. Penelec personnel arrived on Tuesday morning. “The local guys were great and had everything ready to roll for us,” Pam related. “And the community helped us to open in a timely manner.”

This is not the first time that the Burke’s have dealt with electrical problems not of their making at the new location. While the building was still under construction in the summer of 2018, a vehicle accident in the vicinity sent a jolt of electricity into the building, causing similar damage.

What puzzled Burke about the incident on Monday was that Penelec had contractors in the woods during the summer to maintain the right-of-way. “I don’t think they cut back far enough,” she remarked. Her husband, Brian Burke, noted that one of the trees was also noticeably burnt by electricity.

“Sometimes, if they are off our right-of-way, we do get permission to take them down,” Myers said of ash trees that are seen as an imminent threat. “They do pose a threat to our system, and they can come down at any time.”

Nonetheless, the Burkes insist that the new gun shop will open on schedule at 10 am. Unfortunately, potential patrons for the long awaited shooting range will have to wait. The affected panel controls elements of the state-of-the art equipment, and the Burkes have called for a HVAC specialist and a technician from Utah to come in and reset the range equipment.

“It’s actually the ‘brains’ of the range,” Pam explained. “It controls everything. We have no estimate as of now as to when the range will open.”