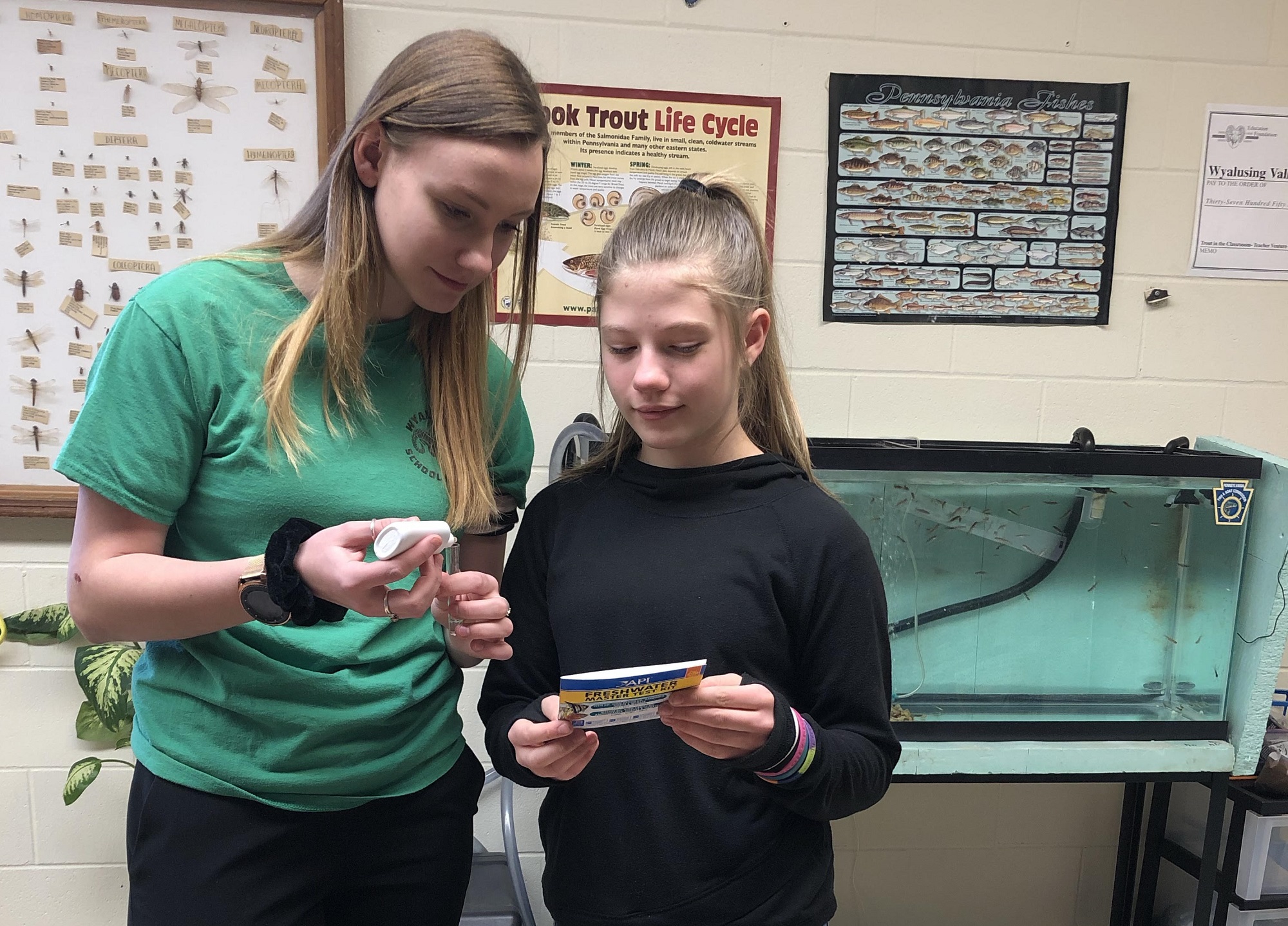 Sage Superko (above, left) and Chloe Kelly test water samples as part of the Trout in the Classroom project at WVHS.

The highlight of a relatively short meeting of the Wyalusing Area School Board (WASB) was a presentation by science teacher Elizabeth Vanderpool (below, left) and freshman Sage Superko about the success of the Trout in the Classroom program. Though they are being raised and monitored by high school students, the tiny fish that were delivered as eggs in November have become a hit with elementary students as well. 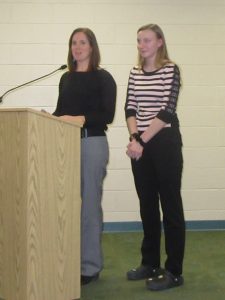 “I like to involve the younger students,” said Vanderpool, noting that several elementary school classes have bundled up and walked to the high school to learn about the project, which is sponsored by the Pennsylvania Council of Trout Unlimited and the PA Fish and Boat Commission (PFBC).

The 275 eggs were free, Vanderpool explained, but the equipment needed to propagate them cost $3,757, which was made possible by the Wyalusing Area Education Foundation (WAEF).

She hopes to eventually get 20 fingerlings to Schrader Creek, a PFBC-approved site, in the spring. Generally, only about 20 of the fish survive to the spring, she related.

When asked by board member Doug Eberlin about the seemingly low survival rate, Vanderpool explained that trout hatchlings are not as hardy as other fish, like goldfish. Ironically, she is considering “bumping” her goldfish out of another tank she has in her classroom because there are still 45 trout living, which will soon exceed the limit for her 50-gallon tank due to their good health and rapid growth.

“The students are doing so well that the fish are doing very well,” she remarked.

Eberlin admitted that he and some other WAEF were a bit skeptical when Vanderpool first proposed the concept of a classroom trout farm to the board, but said that members have been very impressed by the success of the program.

The YouTube video can be found under “Introducing Mrs. Vanderpool’s Trout in the Classroom.”

In her high school student representative report, Mackenzie Tewksbury told of Wyalusing’s success at the PMEA District 8 band and chorus competitions held last week in Williamsport. Among many second place finishes and advancements to regional-level contests, senior Greg Boatman stood out with a first-place finish as a tenor and the winning of a PMEA choral scholarship.

Mackenzie also noted that Wyalusing finished second in the semi-finals of the annual Scholarship Challenge held in Sayre, sending Lancaster Catholic High School to the finals, which will be held in March. Eberlin remarked that this was Wyalusing’s best finish in a number of years.

Elementary school representative Rachel Wilson related that students in grades K through 6 are observing February as Kindness Month and working on performing 30,000 acts of kindness

The board unanimously approved a three-year agreement with PenTeleData for dedicated internet access that will become effective on July 1. “We’re very happy with the way the bids came back,” said district superintendent Jason Bottiglieri, who credited business manager Stephanie Heller for getting the best deal. The contract will save the district $375 per month and provide five times the internet speed.

The board approved a motion to grant the request of the WAEF to auction off the following campus-related items at the 2019 Spring Fling, which will be held at the Black Walnut American Legion on Saturday, April 13: a one week marque message, naming of ingress and egress roads, front row seats and parking spots for both the sixth- and 12th grade graduations, sideline couch seats at a home football game, reserved parking spaces for the 2019-20 school year at both WVES and WVHS, and two one-year passes to the Taylor Family Fitness Center.

Bottiglieri discussed a preliminary Basic Education Funding report from Gov. Tom Wolf’s office that he deemed a positive start. While acknowledging that the numbers and recommendations could undergo significant modifications between now and June 1, he said that he is “feeling more comfortable” about how it might impact the district’s budget and that he is “hearing positive things” from other administrators. In addition to a proposed increase in educational spending by the state, the governor’s office is recommending lowering the compulsory starting age for school students from 8 to 6 and raising the age at which a student can opt out of school on their own from 17 to 18.

In his Buildings & Grounds report, Eberlin noted that he had met with Russell Miller from Leatherstocking Gas Company to discuss different options for bringing natural gas to the school and to review options for conversion.

The board approved the hiring of Tracey LaFrance as the Junior High Track head coach for the upcoming season and accepted volunteer offers from Savannah Schools, Matt Kaufmann, Jon Schulze and Luke Jennings for track; Jerry Kipp for softball; and Scott Fuhrey, Barry Bruyn and Kye Novak for baseball.

Curriculum and instruction technology coordinator Deana Patson related that WVES students enjoyed a fun and positive learning experience at BizTown, which is sponsored by Junior Achievement of NEPA. Activities included opening bank accounts and making purchases and investments with credit cards. FBLA students from the high school participated as well, guiding the younger pupils through the various processes that are part of the BizTown curriculum. Patson promised a lengthier presentation of the students’ adventure at the next WASB meeting, which will be held on Monday, March 11.