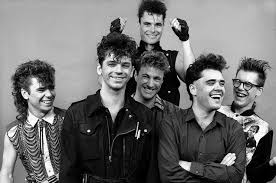 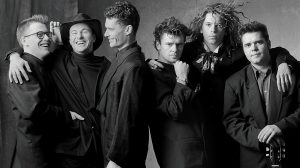 Earlier this evening, a friend shared a really good “brush with greatness”* story as he told of us of his father being hit in the head with a bongo thrown by the percussionist from the 1990s folk-rock group, Blind Melon during Woodstock 1994. I’m not sure that I can top that, but he reminded me of a peculiar brush with greatness with the group INXS I experienced in 1984 when very few people knew who they were.

Wilkes-Barre went through a renaissance as the city was rebuilt after the Tropical Storm Agnes flood of 1972. Utilities were put underground. New little boxy “city” buildings were built to replace some buildings that mysteriously caught fire during the flood. Revitalization of The Square included renovation of the old theater and the openings of new clubs and restaurants. Just east of The Square lay The Station Complex, an amazing reclamation of an old rail yard and train parts into a restaurant, nite club and hotel.

The alternative pop rock group INXS was booked at the Station Complex, and I was invited through friends of a waiter there to have dinner in front of the stage, which assured us of a great view of the show. The Station was known for its authenticity when it came to décor, which included antique furnishings. At that time, they were also bringing in hot alternative acts, including Joe Jackson and Modern English. We were seated at a round pedestal table with a real marble top and enjoyed a sumptuous meal.

I do not recall if there was a warm-up band, but I can still picture the entrance by INXS band members as they ascended the low stage from the right and kicked into their first song just feet in front of us. It probably didn’t take lead singer Michael Hutchence long to realize that my three male friends and I knew their songs better than anyone else in the club. We could only chair dance due to our confinement at the antique table.

Hutchence motioned for us to get up and dance. We eased ourselves up and whooped our appreciation for being noticed by the band, but were still encumbered by the ornate cast iron legs of the table set.

Suddenly, Mike jumped down off the stage towards us. He grabbed the table, thinking maybe that he’d pick it up and move it, but it was so heavy that he quickly propelled it to the floor as it slipped through his fingers. The marble table top broke into at least two pieces, and we cheered.

At last, the dance floor was open! Not only did we launch into a dancing frenzy, others joined us on the floor as the bouncers moved the rest of the tables. As it turned out, the tables were just a bad idea. My friend Wally said that the band was charged for our broken table.

We were reeling for days, weeks and months over our experience with INXS and the memories of the renditions of their hits from around the world that were played mostly only on Rock 107 and college radio. The songs that I’m sure we heard that night were “The One Thing,” “Don’t Change,” “Original Sin,” and “I Send a Message” from their first two available LPs, “Shabooh Shabooh” and “The Swing.”

Years later, I shared this story with radio friend, Jeff Longhaven, better known as Rock 107’s Jay Daniels (of the Daniels & Webster morning show). I said, “I’ll never go to see them again if I can’t be in the front row.” About two weeks later, Jeff handed me a pair of INXS tickets for a show in Philadelphia.

I was so grateful that he’d given up his comp tickets, a common perk of working in radio back the day, to me. I started by saying, “Jeff. This is so nice, but I told you I’d never see them again unless…I….was….Holy, sh*t! These are front row seats!”

Of course, I took Jeff. While it certainly wasn’t as intimate as the my first experience with INXS, it is the icing on the story. It’s just one reminder of the fun that I used to have going to shows and clubs with Jeff and how generous he was.

The big hits that night were “Suicide Blonde,” “Disappear,” and “Bitter Tears.”

I used Hutchens “NOW Dance, Dammit” line as the title for a series of music mix tapes and CDs for friend and family for years.

I had some fun with this chart, counter-weighing the performances and reach of these hits on charts highlighting various genres. INXS appeared on the Rock, Alternative, Pop, Dance, R&B and Adult Contemporary Charts. Following this chart is a list of my favorites. Their biggest hit, “Suicide Blonde” is not on my list. I didn’t like the subject matter nor the song that much, but I played it with some success at The Brook night club at Shadowbrook Resort in Tunkhannock. Their lowest-charting (American) hit remains my favorite.

*”Brush with Greatness” was a recurring bit on one of David Letterman’s late shows.

Readers chimed in with their favorites including “Mediate” (Judy Phillips), “Don’t Change” (Michele McCleary), “Never Tear Us Apart” (Wendy Harvey), and “Need You Tonight” (Sherry Gregory).Dale Bennett recalled INXS being very popular in bars in Okinawa and the Philippines when he was station there in the 1980s. Rich Healey saw them perform live in Bethlehem and remembered it as “an incredible show.”