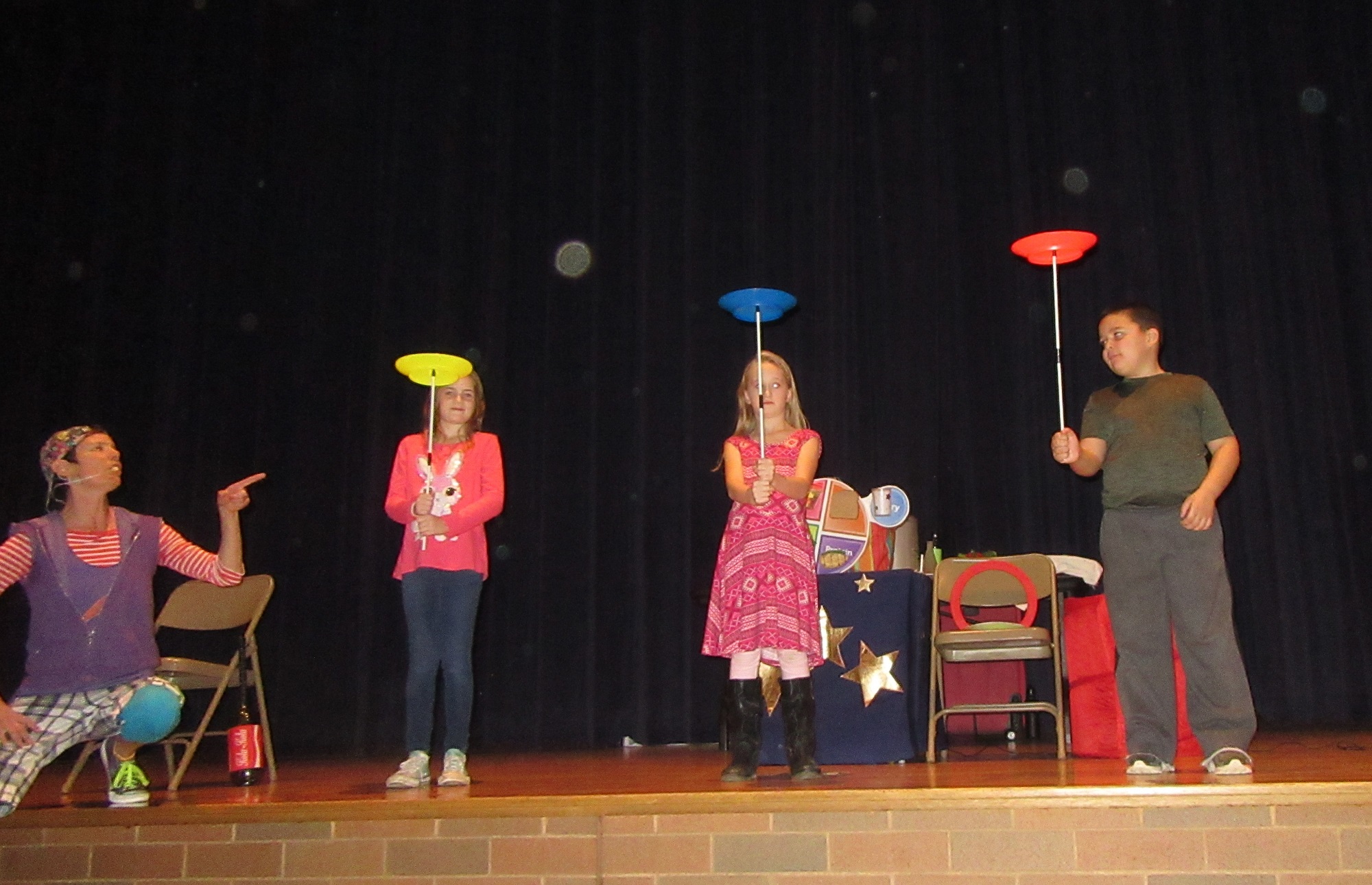 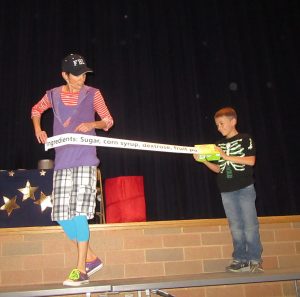 Tunkhannock third graders (top, from left) Addyson, Isabella, and Aidan surprised themselves at their abilities to create a well-balanced meal. Tobe Fit (above, left) and Jayden showed that the list of ingredients in supposedly healthy foods are long on sugar.

Students in the Tunkhannock Area School District enjoyed an action-packed assembly on Nov. 7 geared to connecting them with the concepts of healthy eating and exercise. FoodPlay, hosted by a “nutrition magician” named Tobe Fit, blended juggling, slight-of-hand, music and interactive demonstrations to encourage the pupils to take home a message of self-health that will also be followed up in the classroom. The program, presented to third, fourth and fifth graders was brought to the school by the Wyoming County Community Health Foundation.

Tobe’s attire was purposely cartoonish, and her movements equally animated. She quickly found out that she didn’t have to work hard to rile up a group of students who had just come in from recess and who were anticipating an early dismissal. Tobe (pronounced toe-bee) succeeded in making food and fitness a fun and funny topic. Her simple advice was that the body is made up of what goes into it and will respond accordingly.

“I was impressed with her enthusiasm and the way she was able to tie fun and laughter in with a valuable lesson on nutrition,” paraprofessional Angela Roote said afterward.

Tobe first helped the children make the distinction between what she called “go foods” and “woah foods,” the latter being high in sugar, fat and chemicals and more likely to slow one down. “It’s not the kind of energy that lasts,” Tobe said of sweetened cereals, soda, and even many food items marketed as healthy. “Save them for once in a while,” she cautioned.

Tobe selected three students to join her on stage for a game show called “Let’s Make a Meal.” She first offered the contestants a choice between a whole-food item and a less healthy snack and, after each player took the healthier option, he or she placed the item on a game board representing a balanced platter. Just for fun, she wrapped up the skit by assisting each contestant in balancing a spinning plate on a stick.

Tobe singled out soda as one of a child’s worst enemies, as each can contains more than nine teaspoons of sugar. “Soda is everywhere,” she lamented. “It’s hard to get rid of.”

In a routine that went over especially well with the students, Tobe donned the guise of a scientist and invited the audience into her “Colaboratory,” where she poured sugar, artificial flavors, and caffeine into a large pot, questioning aloud why children should even be given caffeine. Once her concoction was completed, she lowered an extra large tooth prop into the pot. After the students counted to 10, she pulled out a shrunken, badly stained tooth out from the mixture to demonstrate soda’s notorious role in tooth decay.

“I think the kids lived the visuals which showed how much sugar certain things contain rather than just telling them,” Roote suggested.

Tobe introduced the pupils to food labels, encouraging them to “read it before you eat it.” The ingredients are listed by weight, she explained, which is why sugar is so often cited first. Labels can be deceiving, however, she cautioned, noting that sugar often gets different names, such as high-fructose corn syrup. Targeting Fruit Roll-Ups with an over-sized ingredients tab, she shrieked, “Where are the grapes? There’s supposed to be grapes in here!” The closest thing to fruit in the product, in fact, is the pear juice used to sweeten it.

Whole foods, fruits and vegetables, Tobe promised the children, would give them more energy to have more fun. As part of the “Mission Nutrition” she promoted to the youngsters, she demonstrated how to prepare healthy snacks like fruit kabobs and veggie grab bags.

“I have the kids bring only a healthy snack each day,” Intermediate School teacher Kelly Kulsicavage related with a laugh, “so this helped them see that I was right.” 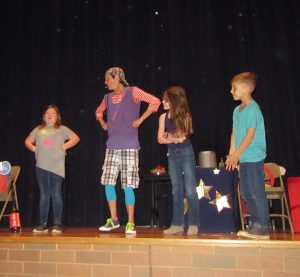 In another skit, Tobe brought three students on stage who claimed with a show of hands to have a hobby that requires movement and had them act out their activity. Vanessa (above, left) demonstrated cheering, Laura (second from right) struck a gymnastics pose, and Tobe instructed Cooper (right) to go out for a long pass to portray football. One movement that everybody can do, Tobe insisted as she leaped off the stage and drew the rest of the children from their seats, is dance. 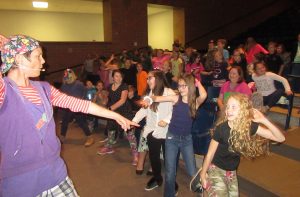 Shaelyn Shave, executive director of the Wyoming County Community Health Foundation, credited the Northeastern Pennsylvania Health Care Foundation, Southwestern Energy, and Welch Associates for providing the funding for the FoodPlay program, which was also presented to students in the Lackawanna Trail School District one day prior. At each school, Shave left behind books and FoodPlay tracker bands to be distributed to the children.

“The FoodPlay program helps to expand existing health and physical education programs beyond the school day,” she explained. The messages shared by Tobe and the engaging materials “will enable the students and their parents to evaluate their progress in attaining a healthy lifestyle.”