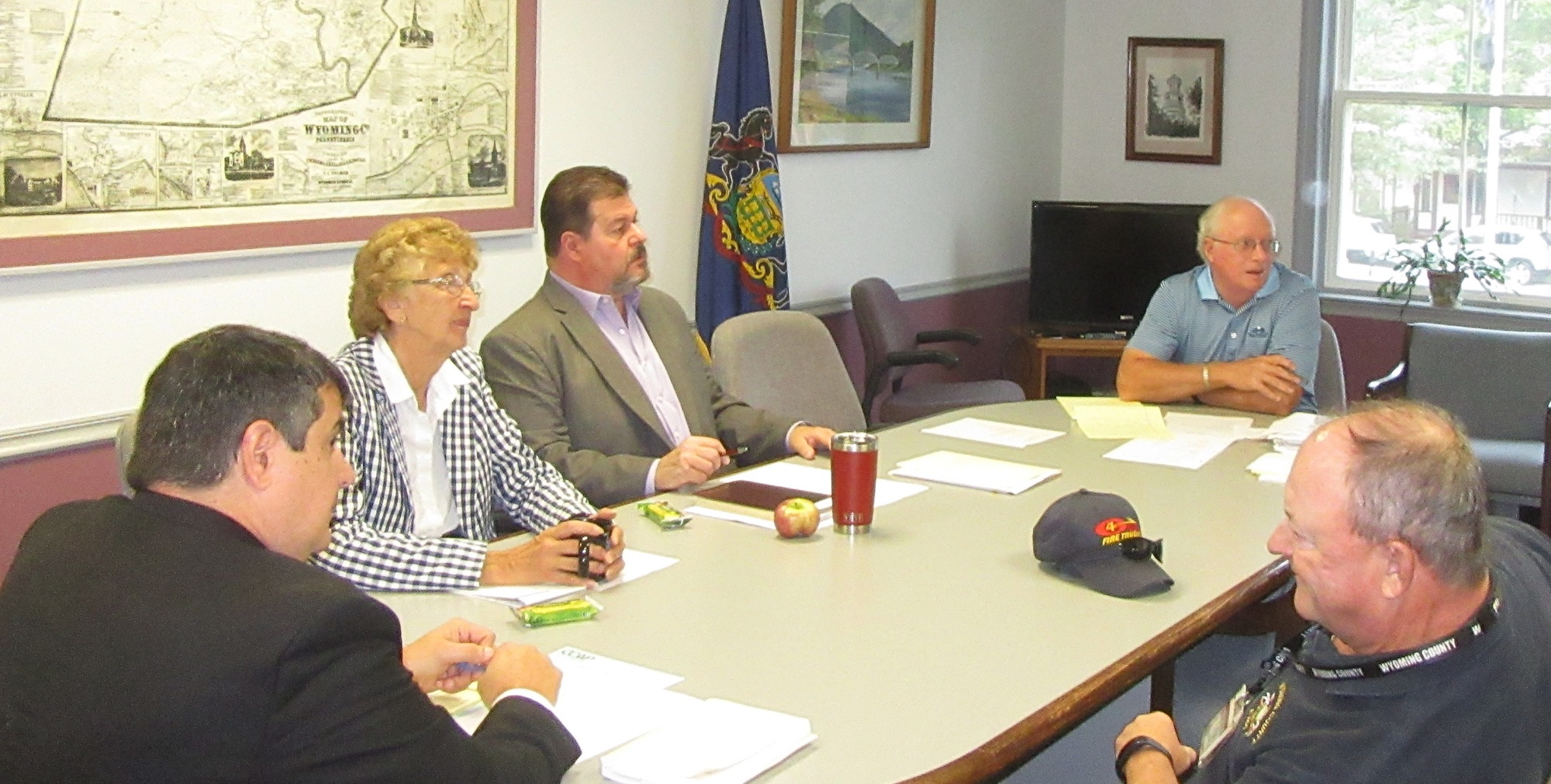 With the general election in Pennsylvania just over a month away, the Wyoming County Commissioners found themselves answering questions on Oct. 2 as to why a polling location that has served some Falls Township voters for up to 30 years is suddenly being moved. Responses given by commissioners Judy Mead and Tom Henry were later corroborated by county elections director Florence Kellett, but Jeffry Zimmerman, Democratic committeeman for Falls Township, was unimpressed.

“Why are we waiting until 30 days before an election to move where twelve hundred people go to vote?” asked Zimmerman, noting that Judge Russell Shurtleff is expected to give the change final approval on Oct. 9.

“They’ve been working on it for months,” Mead explained.

“First, they picked a place that a lot of people were unhappy with,” Henry added.

The Methodist Church has long served Falls District II voters, even after it moved just into Overfield Township. As state voting guidelines and procedures are tightening, the anomaly was brought to the attention of the county election board, which faces even more changes in the next two years.

According to Kellett, the polling location must be within the boundaries of a given municipality whenever possible. The county has also faced a shortage of poll workers in recent years, which made consolidations especially important.

To bring Falls Township into compliance with state guidelines, it was first decided to bring Falls II voters together with Falls I voters at the Township Municipal Building on Buttermilk Road, where the latter group had always cast their ballots.

“It just wasn’t feasible for that many people,” Shook related, noting that parking around the municipal building is limited. “It wasn’t safe to have that many people here.”

Officials of the Assembly of God Church at 167 Mercy Lane offered their building as a polling place, Shook related, which made the most sense to both township and county officials. “We don’t even need to bring in as many voting machines,” she remarked. Also, Shook added, township workers used to have to take the day off because they were not permitted to be at a polling location. Now they can put in a normal work day.

Zimmerman also lamented potential changes to the social aspect that the Methodist Church had always provided by serving dinner. The Methodist Church will continue to serve dinner to voters, Shook maintained. Given the proximity of the two churches, she suggested that Falls I voters, who will now drive a little farther to cast their ballots, might be more likely to eat dinner at the Methodist Church than on previous election days.

“Once the judge confirms the consolidation (on Oct. 9),” Kellett told Zimmerman, “cards will be sent to all of the affected voters to alert them to the change.” The information will also be released to the media.

County chief clerk Bill Gaylord said that new state guidelines will cost all counties more money and new headaches in the coming years. By 2020, elections will revert to paper balloting. New voting machines will be needed to replace digital machines, some less than 10 years old, which could run the county $250,000 or more. The commissioners have previously voiced their concerns and hope that the state will help to cover the cost.

“I would like to see two weeks of voting, starting at the courthouse,” Mead remarked.

Zimmerman suggested that more mail-in ballots would solve many of the problems faced by the election boards.

Wyoming County EMA director Gene Dziak brought some good news to the commissioners on Tuesday as he announced that repair work to the Catlin Hollow bridge in North Branch Township was near completion, as was stream bank mitigation that should prevent further damage to the structure. The road is now officially open. Federal funds and some impact fee money already designated to road and bridge repair was used to facilitate the rapid renovation, most of which Dziak hopes to recover from available state and federal funds.

On that note, Dziak reported that he is confident that damage assessment reports he has collected pertaining to the August storms easily surpasses the $104,000 per capita figure required for a presidential disaster declaration. Damage at six key sites, including the borough Nicholson, which experienced unprecedented flooding, pushed the total over $130,000.

Dziak is now working diligently on personal and individual assistance claims, for which he says government agencies keep changing the requirements. “I’m not sure how that is going to work,” he remarked.
Meeting attendee Lori Bennett asked when Route 87 from Mehoopany to the Sullivan County line might be addressed, noting that it has been in “deplorable” condition since the 2011 floods. Henry noted that the commissioners routinely receive complaints about that stretch of roadway, and PennDOT District 4 officials have never adequately addressed their concerns.

Dziak said that Route 87 is on his radar, and he hopes to include it in his final application, as the rural state highway incurred additional damage during recent flooding events.

The commissioners accepted the resignations of Chris Faux from his agricultural programs coordinator position with the Wyoming County Conservation District and from Adult Probation employee Adriana Serpico-Sipple. Henry thanked the latter for her service and remarked that it has been difficult to keep someone in that position.

Two part time corrections officers, Michael Skumanick and Luke Cruver, started working at the Wyoming County Prison on Oct. 1. Two full time officers have been hired, but their start date has not yet been approved. They will be on the agenda at the next commissioner’s meeting, which will be held at 9 am on Tuesday, Oct. 16.

The commissioners invited the public to two events slated for Friday, Oct. 5. Endless Mountains Extended Care, a new 90-day drug and alcohol transition center located on Lithia Valley Road near Factoryville, will hold an open house from noon to 3 pm that day. And the 175th anniversary of the Wyoming County Courthouse will be celebrated from 3 to 6 pm with an art and photo exhibit, cake, and tours of the court room and old jail cells in the basement.