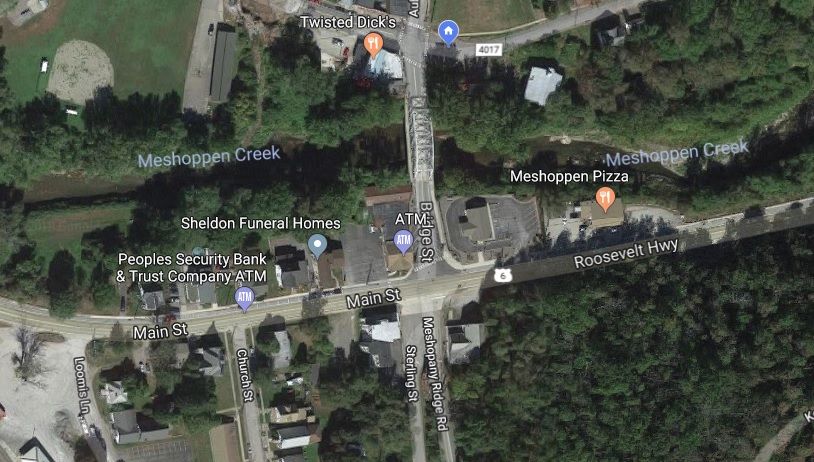 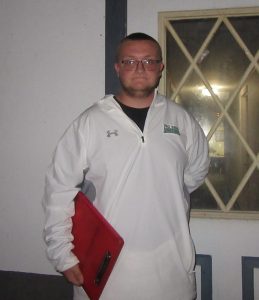 Troop 88 Boy Scout Nathaniel Sheldon recently completed painting 26 fire hydrants in Meshoppen and will soon install snow markers as needed. He did the work as an Eagle Scout project which he will take before a board of review in October.

Photo and story by Rick Hiduk/Map by Google

New playground equipment was ordered for Meshoppen’s Community Park about two weeks ago, and delivery is expected within two weeks. It is unknown at this time who will erect the equipment, and that decision will effect whether the equipment can be directly unloaded in the park or might be temporarily stored elsewhere.

Borough secretary Phyllis Adams placed the order as per the approval of the board at their last meeting of one of two designs presented by Cindy Cona, who has been raising money with others to provide more hands-on activities for youths in the park. Adams informed board members that AAA State of Play, the company from which the equipment was purchased, intends to bring the apparatus to the park, where at least four volunteers will be needed to offload the delivery.

Council member Mike Voorhees maintained that, until it is known who will be erecting the equipment, he would prefer to not see it left in the park. “If we’re relying on volunteers, that could take a while,” he stated. Adams added that a company representative was quite clear that post holes, which need to be filled with cement, not be dug too far in advance too prevent shifting.

Council president John Bunnell offered storage space at his business if it is determined that assembling the playground would be delayed. Adams referred to a company called River Valley Organics from south central Pennsylvania that provides material placement services and said that she would contact them to see what they would charge for the project.

It had been hoped that a five thousand dollar Marcellus Legacy grant for which the borough had applied last year could be used to cover the final costs of installation, but the Wyoming County Commissioners again tabled the release of the funds due to their understanding that the Wyoming County Planning Commission approved the grant application contingent on the borough developing a master site plan, which council decided on May 7 not to pursue with the help of a $15,000 DCNR grant.

“It can be any site plan,” Commissioner Judy Mead said on Aug. 9. “It doesn’t have to be through DCNR.” County planner Lynnelle Farber had told the commissioners at previous meetings that she was especially concerned about the proposed placement of new playground equipment where the current pieces are situated due to persistent flooding.

In other park news, it was noted that five picnic tables and a port-o-lav floated away during the last flood.

Rep. Karen Boback responded to a letter from the council sent to her after last month’s meeting at which the seepage of water on state Route 6 in the area of the blinker light at the bottom of Meshopany Ridge (aka Firehouse Hill) Road was discussed. At that time, council members maintained that clogged drains farther up the hill were the source of the problem, which often persists days after heavy rain events.

Boback’s letter was addressed to PennDOT District 4 executive director George Roberts and copied to the borough. In it, Boback mentions an onsite visit in July at which time the problem was discussed. Acknowledging council’s report that the problem still exists, Boback wrote to Roberts, “Please have someone from your office look into this. We are all concerned about public safety.”

Robert’s response, also copied to the borough, suggests that the source of the seepage is drains within the borough for which the borough is responsible for flushing. Nonetheless, Roberts committed to addressing the situation again by Oct. 31.

Voorhees maintains that the drains are clear of debris, and other council members concurred that the water is coming from farther up the hill.

Chesapeake Energy Corporation is preparing to start up drilling in and around Meshoppen next spring and sent several agreements to the council to sign that include permission to drill within a thousand feet of an existing water well and running a temporary water line through an existing pipe. Reactivated sites mentioned by council members when reading the Chesapeake and Tetra Tech requests included the Smurkoski, McGavin, and AmPro pads.

Council members agreed that the paperwork was essentially a renewal of agreements from 2013 and that they don’t necessarily benefit the borough financially. It was agreed that borough treasurer Christine Swilley could sign the documents.

Nathaniel Sheldon, a member of Auburn Township Boy Scout Troop 88, visited Monday night’s borough council meeting to request a signature for the paperwork he needs for an October board review that should lead to his designation as an Eagle Scout. Sheldon has been working with the council for about a year and recently completed the painting of 26 fire hydrants in the borough.

He also noted that 20 of the hydrants are in need of new now markers and that he will return to install them after they are purchased. Bunnell signed the forms for him, and council thanked Sheldon for his work, which included clearing away weeds and brush from the hydrants.

Due to Changes in her own schedule, Swilley’s request of the board to change her borough office hours from Wednesdays to 3:30 to 6 pm on Tuesdays was approved.

Next year’s Meshoppen Community Day will be held on Saturday, June 29. A committee meeting will be held in the park on Sunday, Sept. 23, or in the borough meeting room if it is raining.

Adams encouraged the board to decide over the next month if they intend to raise taxes and/or sewer and water rates in lieu of the loss of a dozen properties to flood buyouts so that the paperwork can be filed in time.

It was noted on the agenda that Steve and Anna Marie Colley have filed for bankruptcy. Several council members expressed doubts that the borough will ever recoup the thousands of dollars owed in back taxes and sewer and water bills by the Colleys, but council member Brice Priestner insisted that the only chance of getting some of what is owed to the municipality is for someone on council to represent the borough at the hearings, the first of which is in Wilkes-Barre on Sept. 17.

In the meantime, liens have been placed on 11 properties for which the borough is owed water and/or sewer payments.