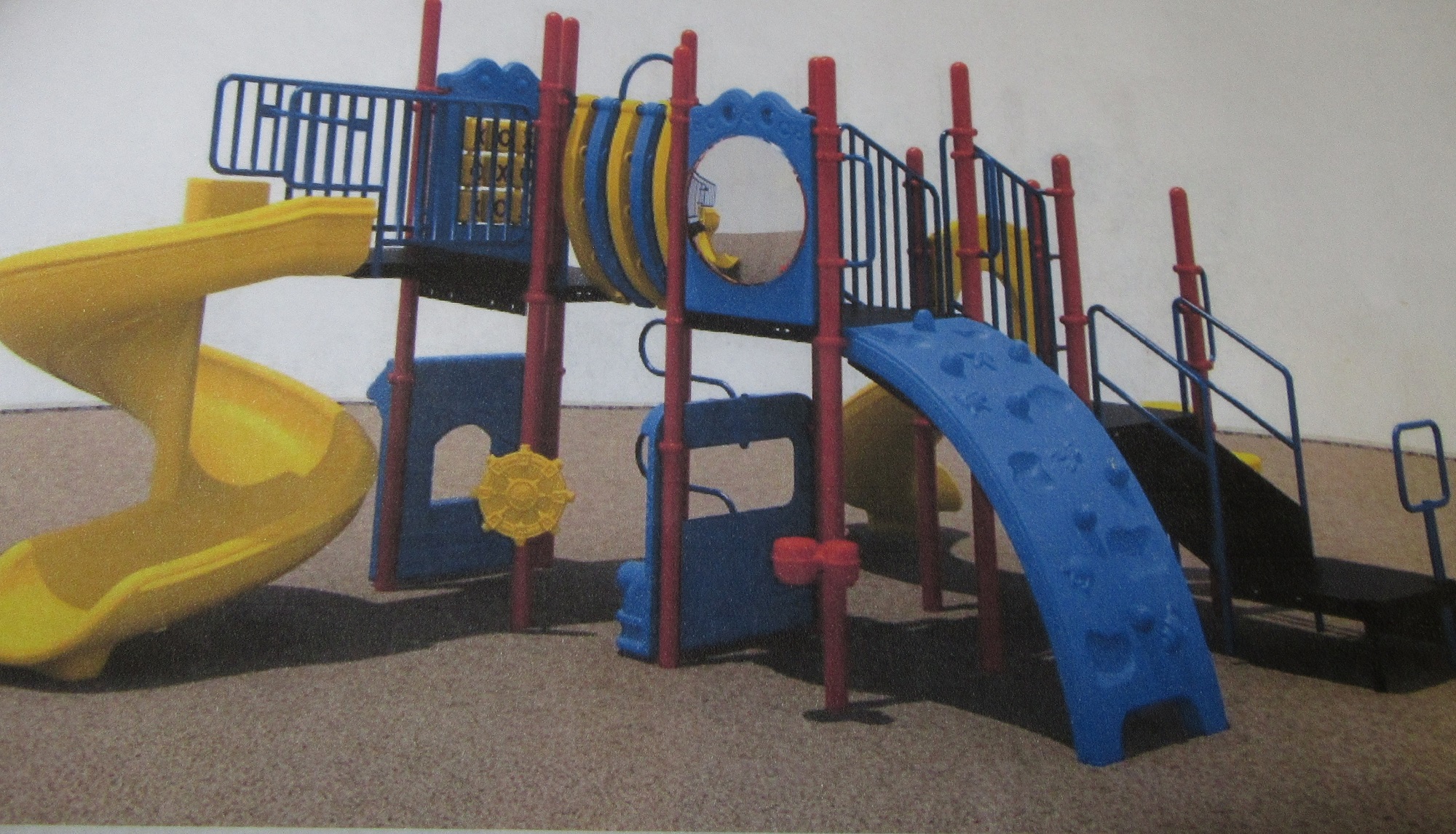 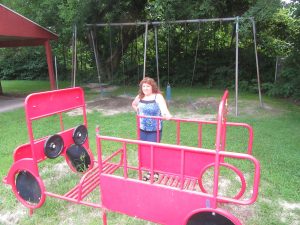 Meshoppen resident Cindy Cona (above) stands in the existing playground at Meshoppen Community Park. The fire truck in the foreground will be moved in the coming months to make way for a new playground set purchased from proceeds from Meshoppen’s Community Day and other sources. Happy-Go-Lucky is the name of the playground set from AAA State of Play (top) that Meshoppen Borough Council agreed to purchase at Monday evening’s meeting.

Though discussions about past due water and sewer bills once again dominated the latest meeting of the Meshoppen Borough Council, the presentation of two options for new playground equipment sparked lighthearted debate and a tentative approval for placing an order soon. Cindy Cona, who has spearheaded the drive to raise money for new equipment, put before the board full-color renderings of two self-contained playground sets that are geared to youths ages two to 12.

The sets range in price from $8,974 to $9,664, both discounted about 33 percent. Delays in getting full approval for the project and raising enough money gave Cona more time to explore affordable options. Most important, she noted, was finding something that would fit in the limited space available. “I measured it again and again,” she noted.

Council agreed that dilapidated benches will be removed and the mock fire truck will be moved to another location. The swings will remain in place, though several need new seats. “They came from the old Meshoppen High School,” council chairman John Bunnell said of his desire to keep the swings in place. “I swang on them when I was a kid.”

Council approved the purchase of the more expensive set, despite a shortfall of about one thousand dollars in available funds and no firm commitment on who will assemble the pieces or install the new set. Secretary Phyllis Adams noted that the deficit and cost for installation could be recovered through a five thousand dollar Marcellus Legacy grant that the Wyoming County Commissioners and Planning Office previously withheld due to the council’s decision in March not to invest with PA DCNR on a master site plan.

Adams said that her calls to the commissioners office had not yet been returned, but the Rocket-Courier spoke with Commissioner Tom Henry who said that, as long as DCNR has signed off on their previous agreement with Meshoppen with no penalties to the municipality, “We by no means want to prevent a playground from being put in the park in Meshoppen.”

Adams had read a letter from DCNR at the regular July meeting that effectively dissolved the original agreement and rescinded a $15,000 DCNR matching grant that would have been put toward the master site plan. “As long as the funds are properly released,” Henry continued, “I see no further problem.” Henry was at a state conference of county commissioners in Gettysburg on Tuesday and said that the matter could be finalized at a commissioners meeting scheduled for today, Aug. 10.

Once the county releases the funds, Adams and Cona can complete the ordering process, and the one and a half ton playground set will be shipped by AAA State of Play from Greenfield, Indiana. In the meantime, Cona is planning a potluck picnic in Meshoppen Community Park at 1 pm on Sunday, Aug. 12 for those who participated in the recent Meshoppen Community Day and for all of those who have supported the playground project. She will provide utensils, paper products, and basic beverages.

Council members concurred that they have lost their patience with property owners who are delinquent in both sewer and water payments to the borough. Of approximately $70,000 in water and sewer debt currently carried by the municipality, $20,680 of it is owed by Steve Colley, whose seven properties in the borough are on both the water and sewer lists. Several of those properties are also on the flood buyout lists, and council members expressed their concerns that they get the money owed to them upfront as was promised by buyout coordinators at the county level.

Council member Mike Voorhees, who has conducted three shut offs so far was told by the council to cut service to the remainder of Colley’s properties, despite the fact that the tenants in his buildings have paid rent in good faith with the agreement that Colley would pay the water and sewer bills. It was agreed that borough has carried the burden long enough.

Also facing shutoffs are residents who call the borough office whenever they see Voorhees in their neighborhood to inquire of their total amount owed and subsequently promise to pay but never do. It was acknowledged that several of those who are so far in arrears also owe back taxes and are facing similar situations in other municipalities. 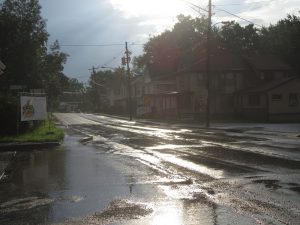 The borough has been at odds with other authorities for months over water on Route 6 at the base of Meshopany Ridge Road that continues to seep up from cracks and potholes for days after each rain event. At previous meetings, council members related that PennDOT officials maintain that it is a borough problem. Voorhees and council member Jack Vaow contend that the storm drains on Meshopany Ridge Road, which is in Meshoppen Township, are clogged. Bunnell said that he has been in touch with Rep. Karen Boback’s office and is hopeful that one of her representatives could look into the issue. In the meantime, Bunnell related, “From the borough’s perspective, we could shut it down. It’s a hazardous situation.”

It was reported that, in the course of doing road patches on Mowry Street, Endless Mountains Landscaping, inadvertently filled the drain holes on a bridge crossing Little Meshoppen Creek. Bunnell asked Vaow to see that the drain holes are reopened and also asked when the company, which does much of the borough’s road maintenance, would be able to replace the culvert between the borough offices and the post office. Vaow replied that company officials are aware of the council’s desire to have the work completed and will get to it when they can.

Word has come from the Wyoming County Housing & Redevelopment Authority (H&RA) that an additional $14,000 has been approved for the demolition of the former Pizza shop on Bridge Street, which H&RA grants administrator Lisa Hahn had promised council she would see to as soon as the flood buyouts were approved. Bunnell is concerned, however, that so much time has passed since the borough first sought bids that Lycoming Supply, whose bid the council had accepted in 2017, might no longer be available to do the work or honor the original bid.

Meshoppen Township maintenance workers were credited for doing some heavy-duty boom mowing along several borough streets at the borough’s expense. Bunnell, who authorized the work, indicated that the workers had done a “good job” though they had some trouble getting farther into some areas do to low hanging branches. Since the thickest saplings have already been cut, he suggested that the work would not cost as much. Mayor Bruce Marshall is hopeful that the borough will have its own boom mowing attachment next year.

Though not a matter of business for the council, members were discourage to hear that the Meshoppen Public Library may be closed due to lack of patronage. “We’ve got a beautiful library there, but nobody is coming in any more,” said Vaow. There are some youths who use computers in the library to do their homework, he noted, but very few people are signing out books, despite recent purchases of new titles.