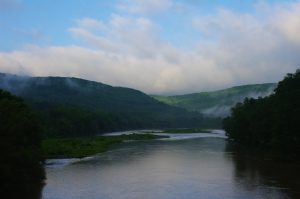 A 15-mile sojourn of the North Branch Susquehanna River from South Windsor, NY, to Hallstead in Susquehanna County will include an overnight camp, educational presentations, an opportunity to help clean-up an island, and a stop at the LDS Priesthood Restoration Site. Exploring the Susquehanna’s Great Bend Sojourn, open to participants 12 years and older, is one of many summer highlights in the Great Bend area that will include the third annual North Branch River Festival.

The sojourn will take place on Saturday and Sunday, July 28 and 29. The River Festival, which will feature live music, food vendors, camping, exhibits, and river paddling contests, will be held from Friday to Sunday, Aug. 10 to 12.

Dana Rockwell, named an official water trail manager for that section of the river this year by the Endless Mountains Heritage Region (EMHR), will coordinate the adventure and serve as one several speakers on a variety of topics, including the 444 Club. Both the sojourn and the 444 Club are sponsored by the EMHR.

Rockwell and fellow kayaker Peck Milbauer paddled the entire 444 miles of the Susquehanna River from Cooperstown, NY to Havre de Grace, MD in 2017 in home-built skin on frame kayaks. They are among a growing number of people who have completed the journey, though most 444 Club members have done it in sections.

Other highlights of the sojourn will include a stop at the mouth of Cascade Creek to discuss the early settlement of Harmony and plans for a park at Cranberry Bog; Starrucca Creek, where participants will disembark for a half-mile hike to the famous Starrucca Viaduct (below); a catered dinner, and a discussion led by SUNY Cortland professor Charles Yaple about the importance of the river to Native Americans and early European settlers.

Reservations can be made and additional details can be found at www.eventbrite.com/e/exploring-the-susquehannas-great-bend-sojourn-tickets-44822734004. Participants under the age of 18 must be accompanied by a legal guardian. Tickets are fifty dollars each, which is refundable up to seven days before the event date.

Details for the North Branch River Festival 2018 are not yet complete, but interested readers can follow the Facebook page of the same name to see updates.