Passage of New Budget Tough on School Board 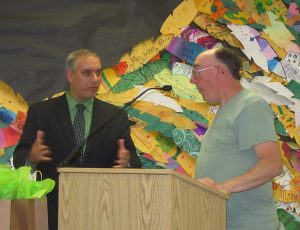 After months of deliberating over finances for the 2018-19 school year, Wyalusing School Board Members passed a nearly $24 million budget on Monday evening that left some members emotionally drained and others at odds. Long-time board member Richard Robinson cast the sole dissenting vote and acknowledged afterwards that his scrutiny of the process probably cost him the position of treasurer that he’d held for the past decade.

After superintendent Jason Bottiglieri and business manager Stephanie Heller provided a brief overview of projected revenues and expenditures, board member Kent Corson expressed his dismay at the prospect of once again putting the burden of an ever-growing budget on the taxpayers.

In the five years that he has been a part of the school board and the budget process, Corson noted, there have been improvements. “We at least have some provisions in case something drastic goes wrong,” he stated.

However, in the face of programs that are state- and federally-mandated but never adequately funded by the government, he added, “We can’t go on this way forever. In the matter of two years, we can be right back in the situation we were in before.”

After the budget was passed, the board was tasked with the appointment of a treasurer for the next school year. Jean Vande Mark somewhat dramatically nominated Robinson to maintain the post. Chairman Chad Salsman’s call for a second on the nomination was met with an awkward silence. Doug Eberlin subsequently nominated Gene Anne Woodruff for treasurer, which was seconded by Corson. A role call vote for Woodruff was unanimous, including a “yes” vote from Robinson.

Woodruff was congratulated by her colleagues, but it was apparent that the switch was not an easy decision for the board. Barb Prevost reminded the public that board members are not compensated for the work they do, the possible exception being the treasurer. Nonetheless, she noted, Robinson had donated the meager stipend provided to him as treasurer back to the school district for the past 10 years.

Never one to avoid uncomfortable topics, Robinson then spoke on his own behalf. “I’ve asked too many questions at times,” he began, suggesting that the board’s course of action likely followed the final budget workshop. Though he said he understood what his colleagues had done, Robinson concluded, “It is a little bit hurtful.”

Shop teacher Michael Reibson (below, right) explained to the board that he had challenged his technology education students to be innovative and proactive about a real life situation, and they chose school safety. With him was Brad Tessier, one of several students who designed and manufactured a door lock mechanism than can be quickly attached to the base of a classroom door to prevent it from being pulled open by a would-be intruder. 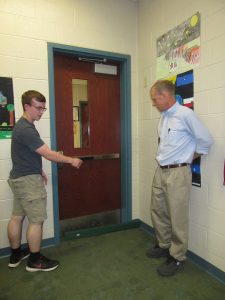 Brandon Brown was congratulated as a national Skills USA qualifier. Landing in the top ten of a recent competition netted him five thousand dollars in scholarships that he will apply to his two year pursuit of an electrical degree at Penn Tech in Williamsport.

When asked by board members if he sensed how well he was doing in the contest, Brandon responded that he wasn’t really sure until the event was winding down, as all of the finalists were within a few points of each other.

Other Board Meeting Highlights 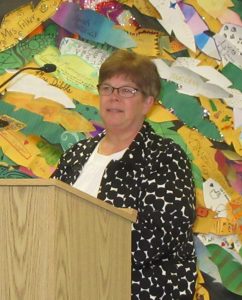 Five long-time school district employees – Loretta Stevens, Jeffrey LaFrance (below), Marcia Gary (above), Norris Mosier, Jr., and Gerald Clouse – were thanked for their years of service to the faculty and students and presented with gift bags by Bottiglieri and the board. Some noted that they had seen three generations of students pass through the schools. 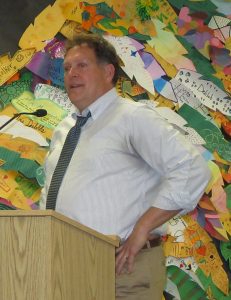 Donations totaling $8,257 were accepted from the Wyalusing Booster Club, the Kenneth and Caroline Taylor Family Foundation, the Mac-wi-hi-lusing Chapter DAR, and the Camptown Civic Club, bringing the total to more than $45,000 for the 2017-18 school year.

New courses approved for the upcoming school year include Astronomy, AP Human Geography, Study Skills, and Grade 8 Careers. Astronomy was offered on a limited basis this past year and was well-received by participants according to those surveyed. It is hoped that, in the coming year, the students can take a field trip to the Keystone College Observatory.

Following a lead by the Towanda School District, the board approved a policy banning all use of electronic smoking devices, commonly known as vaping, on the campus. The policy is inclusive of substances that do not contain nicotine. Assistant high school principal Don Jacopetti said that vaping has not yet been an issue at the school but felt it was best to get ahead of it with the new policy.

As per an approval by the district’s solicitor, Laceyville Police officer Kevin Costello will start making drive-throughs of the campus, joining Pennsylvania State Police, who already make unscheduled stops at the schools.

State of the District Address Offered 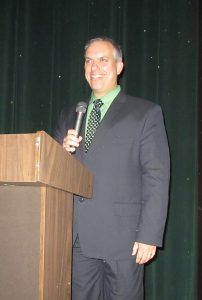 Prior to the school board meeting, Dr. Bottiglieri presented the annual State of the District address in the multipurpose room of the elementary school. At least 80 people, many of them former teachers and board members, enjoyed an overview of the curriculum enhanced by relative video segments. Some of the bigger achievements of the past year, Bottiglieri announced, is a one hundred percent growth in math and science scores, individualized career plans for high school juniors, the first new elementary reading program in 30 years, and advancements in technological use and resources for both students and staff.

“We do not educated the same as we did even five years ago,” he remarked. “It’s no secret that students of today learn differently than they did yesterday.”

Achievements included the purchase of Chrome Books for students and teachers and the implementation of the RAMS Virtual School as an alternative to other cyber options for home-schooled students. Bottiglieri cited the latter for bringing a number of students back to the campus for extracurricular activities like sports and arts. At least eighty-five percent of all students in the Wyalusing School District are involved in extracurricular activities, he noted.

Lastly, he assured those in attendance that the district is doing everything that it can to ensure the safety of students, including the completion by staff of the ALICE emergency response program, the elements of which include alert, lock down, inform, counter and evacuate. The district also has an assigned Crisis Management Team and newly employed software that allows for instantaneous communication via personal mobile devices in the event of an intrusion or other emergency. 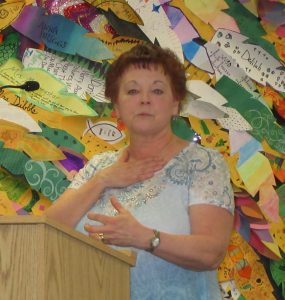