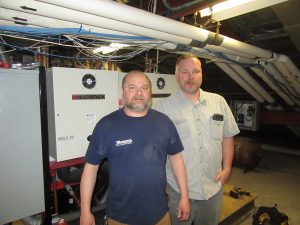 Bradford County maintenance supervisor Paul Yeager (above, left) and bridge maintenance supervisor Bob Voda take a break on Wednesday from their work on the cooling system at the courthouse in Towanda. Yeager hopes to reconnect the duct work between the zone control modules behind them and the roof units next week. Jennifer Smith (below, center) from Main Link joined Bradford County commissioners (from left) Daryl Miller, Doug McLinko, and Ed Bustin on Wednesday in proclaiming May 2018 as Mental Health Awareness month.

Several important proclamations were read, and park concessionaires and managers were approved in advance of a much-anticipated summer recreation season, but the rejection of a bid for installation of a new air conditioning unit in the courthouse revealed a peculiar silver lining for Bradford County on Wednesday.

The commissioners have been working to get the failing “chiller” repaired since early 2017 and tabled a bid of $98,700 from an Elmira, NY-based firm last May, indicating that it was about $40,000 over budget. The cost of the unit itself was projected at that time to be about $105,000. The remedy, as it turns out, is pretty cool.

Commissioner Doug McLinko noted on Wednesday that the county’s new maintenance supervisor, Paul Yeager, came to them with a solid background in heating, ventilation and air conditioning. “The reason that we are rejecting the bid is that we are going to do it in-house,” McLinko stated. Yeager’s supervision of the project, which he hopes to have completed before hot weather sets in, will save the county about $44,000.

Camping at Mt. Pisgah County Park, which was renewed in 2017, will continue this year under the supervision of Ricky Worthington, who will reside at the park and manage rental of rough camping plots. Lydia Keeney will continue as concessionaire at Larnerd-Hornbrook County Park, and Cindy and Ron Chaapel will maintain the concession stand and an increased number of campsites at Sunfish Pond County Park.

Cooks Pond County Park in Orwell Township, which was adopted by Bradford County in 2016, was stocked for trout fishing this year. At Larnerd-Hornbrook Park, Commissioner Ed Bustin noted that about 50 American chestnut saplings have been planted as part of an effort to reintroduce the trees, which were lost to blight decades ago. He also reported that the “inclusive” playground installed at the park two years ago is holding up very well.

“It’s uncommon for a county to have four parks,” said McLinko. “We are blessed.” He suggested scheduling public meetings at all four county parks over the course of the year to help bring awareness to the natural and recreational assets available to county residents.

Three official proclamations were read during the April 25 meeting, and Thursday, May 3, was set aside for the county’s annual observance of the National Day of Prayer. The event, which includes participation by students from local schools, will be held at noon on the courthouse steps.

May 6 to 12 was marked as Corrections Employee Week in Bradford County, which prompted accolades from all three commissioners for Warden Don Stewart, Deputy Warden Pete Quatrinni and the rest of the staff at the facility in Burlington. McLinko also thanked the tax payers for supporting an institution that “has a lot of moving parts” but has consistently passed state inspections and pared down costly outsourcing of inmates.

Bustin said that the Bradford County Correctional Facility’s change in focus from “detention to correction” is regarded as a model for bringing the incarcerated back into the general population more quickly by addressing the behavioral issues that got them into trouble.

Main Link representative Jennifer Smith read the proclamation declaring May as Mental Health Awareness Month, which led McLinko to relate that issue back to the prison system. In addition to thanking Smith for the services provided by the Main Link, he suggested that an increased awareness of mental illness has helped those in the judicial system realize that prisons have inadvertently become mental health facilities, which is challenging for a system often under-equipped to properly deal with the issue.

As warm weather arrives and insects become more active, Lyme Disease Awareness Month was announced by Jean Ann Redner, Secretary of the Valley Lyme Support Group. Among the statistics that caught the commissioners off guard was the fact that the federal Center for Disease Control considers the 11,443 cases on Lyme disease reported in Pennsylvania in 2016 to be only about 10 percent of the actual number, the fact that Pennsylvania has led the country in Lyme disease cases since 2011, and that transmission of the disease can occur within the first hour of a tick or nymph making contact with a mammal. 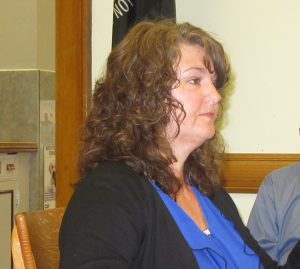 McLinko noted that county employees are offered testing for Lyme disease, even though, as Redner (above) pointed out, tests are unreliable. Also distressing to the board was the expense Redner has incurred in finding adequate treatment of her own infection. Dr. Clarence Mast from the Meshoppen area was cited as one of the few specialists on the disease in the region.

Redner noted that there is a bill currently idled in the Pennsylvania senate that would push insurance companies to be more proactive and supportive of tick-borne illnesses and encouraged those in attendance to contact Sen. Gene Yaw, who is on the committee, to encourage action on the proposed legislation.

The commissioners invited Redner, who is a certified instructor for the PA Lyme Prevention Program to return to the courthouse to provide a more detailed presentation on the prevention and treatment of Lyme disease that can be adequately promoted.

Endless Mountains Outfitters owner Keith Brown visited the meeting to ask the commissioners for permission to use Larnerd-Hornbrook Park for an overnight stay by at least 40 students participating in this year’s Student Heritage Sojourn. The river adventure from Sayre to Sugar Run will last three days and include overnight stops at the park in Sheshequin Township and French Azilum Historic Site.

Brown acquired the business this year from David Buck, who previously coordinated the paddling excursions that are sponsored by the Endless Mountains Heritage Region. Brown has been an integral part of the program and brought with him student paddler Braydin Ryck, whom he also now employs. 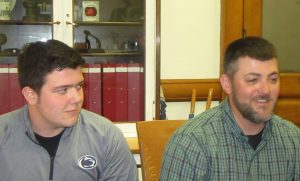 Braydin (above, left) told the commissioners that Brown (right) introduced him to paddling via the student sojourns and that it seems to him that more people are taking an interest in the Susquehanna River and its related wildlife.

Brown said that it is his goal as a high school teacher and owner of the recreational business to increase the number of youths on the river because the future generations will have to take care of it. He opened the sojourn this year to junior high students for the first time and still has openings for those who register through Friday, May 4 by calling 570-764-7102 or sending an email to kayaks@ptd.net.

The commissioners, who were invited to join the students at any point along the sojourn, unanimously granted his request. Bustin and Commissioner Daryl Miller have participated in previous years.

The return of former chief Clerk Gayle Kerschner as a member of the county’s Election Board was celebrated as Kerschner assisted with the reorganization of the board and the approval of this year’s poll workers and polling locations, which will be open from 7 am to 8 pm on Tuesday, May 15. A pre-election testing of electronic tabulating equipment will take place at the Election Office in the courthouse annex on Thursday, May 10 at 11:30 am.