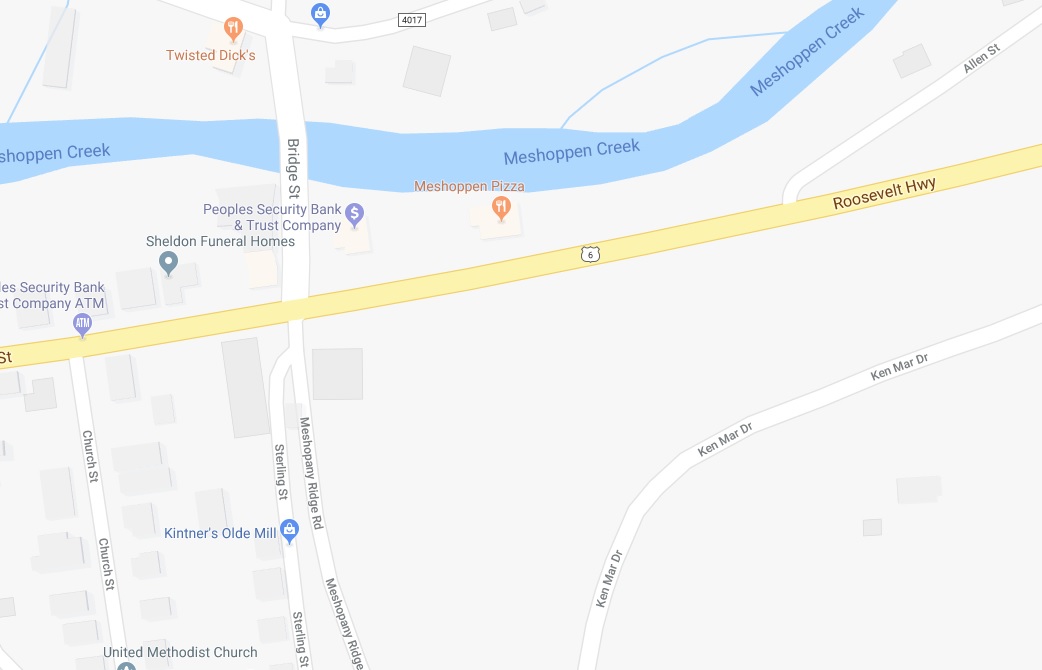 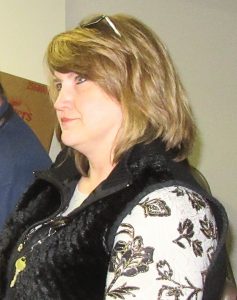 Wyoming County EMA director Gene Dziak (not pictured) and Housing & Redevelopment Authority grants administrator Lisa Hahn (above) attended the April 2 meeting of the Meshoppen Borough Council to provide an update on a $1.5 million buyout of numerous flood-prone structures in the town.

Photos and Stories by Rick Hiduk

More than a dozen structures are part of a planned buyout of single-family dwellings and apartment houses on Church and Allen streets in Meshoppen. The loss of the buildings, demolition of which could begin as soon as June, will not only greatly change the landscape of the downtown area, it could be devastating to the municipality’s economy.

Such was the consensus of borough council members who got details on Monday evening from Gene Dziak, representing Wyoming County, and Lisa Hahn, representing the Housing & Redevelopment Authority.

“Since I’ve been here, we lose a little chunk here and another chunk over here,” council president John Bunnell said in reference to previous buyouts and buildings taken off the tax roles for other reasons. “We’re running out of chunks. If you’re take 14 houses away from us, you’re killing us.”

Dziak agreed that the situation is especially unfortunate for the borough, but the CBDG funds made available through the Redevelopment Authority are geared toward the homeowners, who are facing consecutive 18 percent increases in flood insurance costs over the next two years. The increases are due in large part to new flood plain maps being employed this year that expand the flood zones beyond that of the 2012 maps and make the houses unaffordable and unattractive to buyers.

Hahn cautioned that only five of the buyouts are secured. One is under appeal, and the remaining properties need additional inspections requested by DCED to confirm that FEMA funds disbursed to owners after the 2011 flood were indeed used for home improvements, which are qualified by receipts maintained by the property owners. Dziak conceded that this is challenging because the homeowners were instructed only to hold onto their receipts for three years.

Bunnell noted that some of the homeowners have spent a considerable amount of money on electrical upgrades and new flooring. Such improvements should be obvious to inspectors, Dziak suggested, but any amount of the money given by FEMA that cannot be accounted for will be subtracted from the appraisal and the buyout.

To the relief of the council, back taxes and unpaid water and sewer fees will also be deducted from the payouts. The final amount given to the property owners can then be used in any manner they please. Nonetheless, the borough will lose 21 of 201 EDUs (equivalent dwelling units) as water and sewer costumers, the cost of which would have to be spread to other property owners.

As for the conveyance of the properties to the borough, the land will fall under “green space” ordinances, which prohibits the building of any permanent structures. After demolition and restoration is completed at the expense the county, Dziak explained that the property will be leveled to its original contour. If grass is planted, it must be maintained at least once per year. Some uses that would be permitted include parking lots and community gardens.

Even a playground would be OK, Dziak stated, an irony not lost on a municipality trying to secure an unrelated grant for playground equipment for its community park that is under contention in part because of the park’s penchant for flooding.

A few members also questioned the inclusion of two apartment houses on Allen Street that only took water into their basements in 2011, a fact brought up many times over the past year. The new flood maps, Dziak explained, now include those two building, making them eligible for the buyout.

In addition to concerns about the remainder of some structures in a zone that some council members would like to see cleared completely, if it has to be cleared at all, the board was also dismayed to learn that green space projects prevent a municipality from collecting royalties from natural gas that will likely continue to be drawn from the land. Dziak must negotiate to extinguish the gas rights, but he did not have an answer for where that money goes or if the extraction of gas could be halted.

“Has anybody found a way to recoup their losses?” council member Jack Vaow asked Dziak in reference to other municipalities dealing with buyouts.

“They took it on the chin,” Dziak said, emphatically, citing Mehoopany as an example.

Bunnell thanked Dziak for bringing the information to the meeting, even though it was not necessarily good news. “It’s a win-lose situation,” he stated. Dziak in turn encouraged the council members to call his office with any questions and avoid letting any rumors fester unnecessarily.

Seizing the rare opportunity to speak with Hahn directly, Bunnell asked for a progress report on the removal of the old pizza shop on Bridge Street, the funds for which Hahn maintained are secured. She related that she has been so busy functioning as the agent for the buyout that she has not been able to follow up on the dismantling of the building attached to the library. “It is on my radar,” Hahn assured the council.